The Morphy Home on Rue Royale… 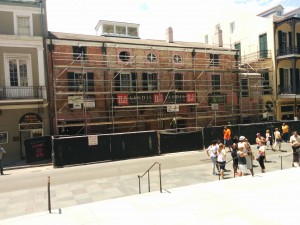 The Morphy Home, in the 400 block of Rue Royale in the French Quarter. Owen Brennan, Sr. founded his restaurant on Rue Bourbon, across the Old Absinthe House, in 1946. He acquired the Morphy home on Rue Royale, in 1956, and moved the restaurant there. After Owen Sr. passed away, Owen “Pip” Brennan, Jr., took over the restaurant, until last summer. The restaurant’s finances were in bad shape, and the building was placed up for auction. A partnership, one of whose members is Ralph Brennan, Pip’s brother, and an owner of a group of restaurants in his own right, bought the building, and evicted Brennan’s Restaurant. A year later, you can see that there’s a lot of work being done to the front facade. The pink-painted plaster front has been stripped to the brick.

There has been no formal word on what Ralph Brennan has planned for the property.