Captain Daniel T. Patterson, in the uniform of a Fleet Captain, 1830s

Most narratives of the Battle of New Orleans focus on only two “personalities,” Andrew Jackson and Jean Lafitte. One of the things we’re going to do in the Battle of New Orleans podcast is to go a bit deeper than that, presenting some of the other men (and women) who played important roles in defending the city from the British. We’ll start this off with Captain Daniel Patterson, US Navy.

Even when Patterson is mentioned in accounts of the Battle of New Orleans, it’s usually to describe his role in the naval battle that took place on Lake Borgne, before the land battle in Chalmette. Patterson’s involvement with the city of New Orleans began long before that, however.

Daniel T. Patterson was born on March 6th, 1786, on Long Island, in New York. He volunteered as an “acting midshipman” at the age of 12, in 1799, and was appointed to the warrant rank of Midshipman a year later. (At this time, the US Navy’s rank structure was modeled after that of the Royal Navy.) At the age of 16, still a Midshipman, Patterson was transferred to the USS Philadelphia, where he served in the blockade of the Barbary Pirates in Tripoli. He was held as a prisoner when Philadelphia was taken by the pirates on October 31st, 1803. Patterson was released in 1805 and assigned to Naval Station New Orleans (as a Midshipman). He was promoted to Lieutenant in 1807, at the age of 20, in New Orleans, and continued to serve there up to the outbreak of the war of 1812.

In 1812, Patterson was promoted from Lieutenant to Master and Commander, and given command of Naval Station New Orleans. Keep in mind, this was a serious posting—New Orleans was the second largest port in the United States, behind New York City. It was a logical posting/promotion, since he’d already been in New Orleans for seven years. While he did not command a ship of his own at the time, he would have had access to a number of small craft assigned to the station. With smuggling being one of the regular issues/problems for the US Navy in South Louisiana, Patterson would have regularly taken those small craft out into the lakes and bayous, learning the water routes in and out of the city.

He also learned about Barataria Bay, the headquarters of the brothers Lafitte. Jean Lafitte ran the smuggling operation, and Pierre was the “more respectable” brother, who sold the smuggled goods in the city. No doubt Patterson had a few run-ins with the Lafittes over time, which would explain why he was so hell-bent on closing them down in 1814.

By all accounts, Patterson was a competent officer, who did his job well. While Jackson gets credit for organizing the defense of New Orleans by land, it was Patterson who did the long-range planning for the defense of the city. Patterson tracked the naval movements of the Royal Navy squadron that moved into the Gulf after their initial successful attack on Pensacola.

When the British took Pensacola, on August 14, 1814, Jackson shifted his command from New Orleans to Mobile a week later. Jackson ordered Patterson to shift the small squadron under his command in New Orleans to Mobile Bay, but Patterson refused. He knew that Mobile Bay would be much easier for the British to blockade, trapping what little naval firepower the US had in the Gulf. Jackson deferred to Patterson’s superior knowledge of naval tactics and the Gulf of Mexico, and the ships remained in New Orleans. This is very important later, when the Royal Navy entered Lake Borgne in December, 1814.

With his squadron intact, Patterson led an attack on Jean Lafitte’s base in Barataria, on September 16, 1814. He captured six schooners, which he brought back to the port of New Orleans. It’s uncertain whether or not Lafitte would have risked his smuggling fleet in a defense of New Orleans against the British, so Patterson felt justified in taking the craft outright. This action naturally caused a rift between Lafitte and the Americans, but not so much that he didn’t give the Americans a chance to match the British offer for his services.
It all worked out for Patterson, in the long run. His plans helped New Orleans be as protected as it could be, as the British approached in December, 1814. The small squadron under his command executed a solid delaying action against the British on Lake Borgne on December 14th.

After the battle, on February 28, 1815, Daniel Patterson was promoted to the rank of Captain. He continued to command New Orleans, then commanded other naval stations in southern states, until 1824, when he was appointed captain of Constitution, which was flagship of a squadron in the Mediterranean. He returned to shore duty in 1828, becoming a Naval Commissioner, then Commandant of the Washington Navy Yard, a post he held until his death on August 25, 1839. Patterson is truly an unsung hero of the Battle of New Orleans. Yes, “Old Hickory” deserves the recognition he received, using the battle to propel him into the White House, but hard work and shrewd planning from men like Daniel Patterson were equally important. 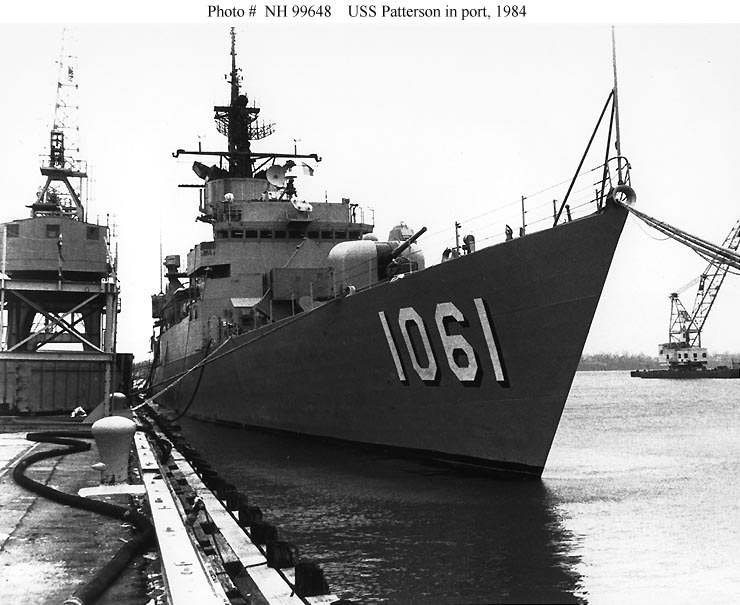 USS Patterson, DE-1061, in port in 1984. This is the second of three US Navy ships named for Daniel Todd Patterson.

That’s all for this week’s Battle of New Orleans Pod. Have a great weekend, and we’ll catch up with you next Tuesday, for the NOLA History Guy Pod, and back next Thursday for another BNO Pod.