Podcast – The “Basin” on Basin Street

Back to podcasting! We’re going to be doing two, fifteen minute podcasts a week for the fall and winter. There are a few reasons for this format:

1. I prefer shorter podcasts, and I think you do, too. With all due respect to long-format pods, I find history to be more entertaining in small doses. Maybe if I had a partner, a longer format would be fun, like the kind of show The History Chicks do, but this is just me talking, so let’s keep it short.

2. It’s easier to develop a 15-minute show. If you figure that a lecturer or speaker talks to a group at about one hundred twenty words a minute, that’s about eighteen hundred words per minute for this format. Most “how to become a writer” guides say that you should write about fifteen hundred words a day to be on a good, “professional” pace. This works, then—eighteen hundred words is a day’s work.

3. It’s not the only writing I do. I’m looking to re-start the food podcast as well, and I’ve got my fiction projects moving forward. I don’t want this to be so ambitious that I chuck it because of time constraints.

OK, so all that said, here’s how this will work through the winter. We’ll do two pods a week, on Tuesdays and Thursdays. The subjects for the Tuesday pod will vary, but the Thursday pod will focus on the War of 1812, as we approach the two hundreth anniversary of the Battle of New Orleans, in January. In terms of activity in the war, two hundred years ago today, this is kind of a slow time; the war hasn’t moved into the Gulf of Mexico just yet. We’ll build up to the battle from here.

That brings us to today’s subject: Basin Street. I did a “photowalk” this past Saturday, taking photos with my new Nikon 3200 digital single lens reflex camera. Now, I was never a pro-level photographer, but my old Nikon EM camera, and the two or three lenses I owned did just fine. I moved up to a Nikon FM2 when the boys were playing soccer, which also coincided with the early years of the web. We used to get a lot of attention when we’d do a site where we’d shoot film, scan the photos at a high resolution, then reduce them to a good size for the web. So, back to the photowalk. My plan was to start at the Cemeteries Terminal of the Canal Street streetcar line and walk Canal to downtown. It was fun, and good exercise. When I hit the CBD, I was reminded that the Louisiana State Museum has a lecture this week about how wonderful a mayor DeLessepps Story “Chep” Morrison was. I disagree, and Basin Street has a lot to do with that.
Visitors come to New Orleans and wonder why there’s no canal on “Canal Street.” Those who venture over to Faubourg Treme find another water-related name, Basin Street, and often ask the same thing. Unlike Canal Street, however, which never had a canal, there really was a waterway and “turning basin” on Basin Street.
Let’s go back to before the Louisiana Purchase, when the city was under Spanish rule. With Spanish colonies along the Gulf Coast between New Orleans and Mobile, there were many trade opportunities. Given how easy it was to cut along the coast by boat, then into Lake Borgne and Lake Pontchartrain, this made more sense than going out into the Gulf to approach the city from the mouth of the Mississippi River. So, merchants on ocean-going ships could get to what is now the city’s Lakefront, and then head inland from there, via Bayou St. John. One big problem—that waterway came to a dead-end at the head of head of the bayou, near what is now Jefferson Davis Parkway in Mid-City. In 1794, the French-Spanish Creoles of New Orleans decided to do something about that, creating a water-based link between their city and Lake Pontchartrain.
The city decided to tie the head of the bayou to the edge of the French Quarter. The resulting waterway was named the Carondelet Canal, named after Louisiana’s Spanish governor, Francisco Luis Hector de Carondelet. The photo above is from an 1895 multi-volume set entitled Art Work of New Orleans.
In modern directions, the best way to seek out the Carondelet Canal is to start with lunch at Parkway Bakery, on Hagan Ave. and Toulouse Street, in Faubourg St. John. After lunch, walk back up to Moss Street and Lafitte Avenue, then walk back towards the end of the bayou. The Canal started there. Now, follow Lafitte Avenue down to Basin Street, and you’ve re-traced its path.
The French Quarter ended at Rampart Street, so digging the turning basin for the canal just north of there made perfect sense. Naturally, the street which led to the basin became known as “Basin Street.” You can see the street leading up to the turning basin in this section of the Robinson Street Atlas from 1883. (Canal Street would be off the map to the left.) 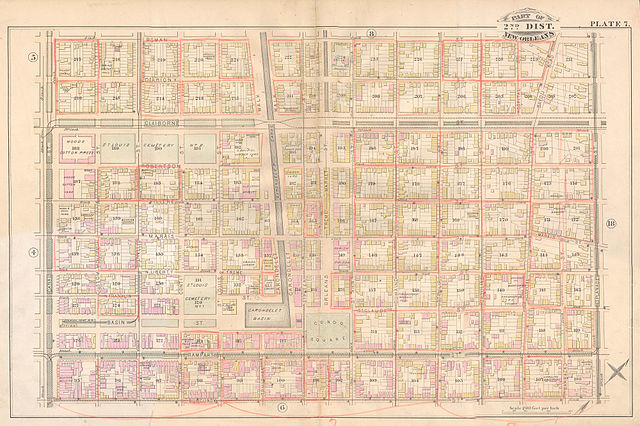 The Robinson atlas shows the canal going five blocks down from Claiborne Avenue, into the turning basin. Later, after the Louisiana Purchase, The Anglo-American merchants who moved into the “uptown” side of the city and did business on that side of Canal Street didn’t like the positioning of the Carondelet Canal, so they constructed a wider canal on that side of town in the 1830s. The “New Basin Canal” took over the bulk of the small craft traffic from the lake by the Civil War. By the 1920s, it was clear that the Carondelet Canal was of no real practical use. The Works Progress Administration (WPA) targeted the city’s drainage system for improvement in the 1930s. Segments of the Carondelet Canal, no longer navigable, were converted for usage as storm drainage. In 1938, the turning basin was filled in.

The railroads took advantage of the clear path into town left by filling in the canal to lay tracks there. There were already tracks running on Bienville Street, for excursion trains out to Spanish Fort that were operated by the New Orleans City Railroad Company (the same company that started the Canal Street line). There was also a train station on Canal and Basin Street, built in 1908. When the Carondelet Canal and its basin were filled in, the water path to the Gulf Coast became an iron one. The Southern Railway expanded their service to New Orleans with “The Southerner,” which ran from New Orleans, to Atlanta, Washington, D.C., then up to New York City.
Rail service to Basin Street came to an end in 1952, when Chep Morrison’s plan for a single railroad terminal for the city became reality. Getting everyone involved in that project on board was an incredible challenge, so Morrison began a serious “scorched-earth” campaign, ordering all the other passenger stations in the city demolished. That meant the New Orleans Terminal Company station, which had stood on Canal and Basin Streets for almost fifty years, had to go. In its place, Morrison had a monument to Simon Bolivar constructed.
Chep Morrison demolished a train station that was designed by Daniel Burnham, the architect for Union Station in Washington, D.C. This is my big problem with building up Morrison’s legacy—while he did a lot of good things for the city, his record on historic preservation is dismal. Think of all the cities where old train stations have been converted to other uses, Salt Lake City, St. Louis, Washington, D.C. New Orleans could have been one of those, but no, we have a monument to Simon Bolivar. At a time when that end of the Central Business District could use more anchors…well, that’s a what-might-have-been.
Without the passenger terminal and the train tracks running from Basin Street up Lafitte Avenue, Faubourg Treme developed a wide swath of undeveloped land. The area remained undeveloped throughout the 1950s, as the Municipal Auditorium, the Mahalia Jackson Theater for the Performing Arts, and Armstrong Park, were all developed on the other side of what was originally the Carondelet Canal. When the Municipal Auditorium was converted into a “temporary casino” after the approval of casino gaming for the city, in the 1990s, that undeveloped area was converted into parking for the Auditorium.
To sum it up, Basin Street now appears to be one of those little oddities that make New Orleans special. Unlike “Canal Street,” however, this time, there’s really something to the name.
That wraps our first pod this week. Be sure to join us Thursday, for our first Battle of New Orleans pod. You can read the transcript (more or less) of the pod at NOLAHistoryGuy dot com, as well as access links to add the pod to your smartphones and other devices. Have a great day!