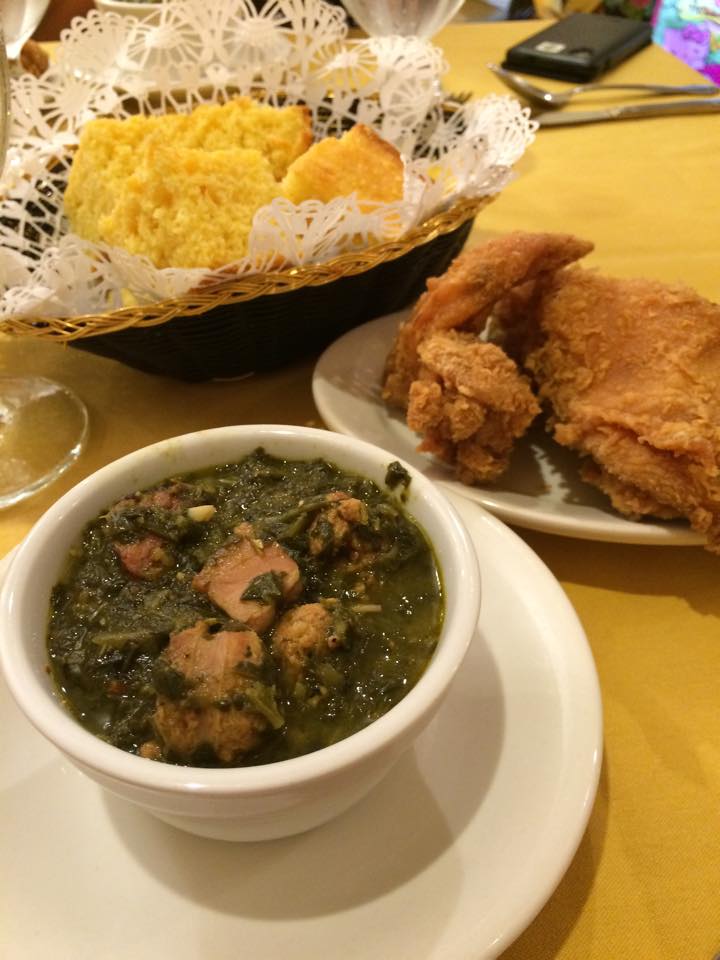 Good Friday is still a day off for many businesses in New Orleans. Like many local traditions, those surrounding Holy Week have become blurred as our world becomes more secular.  Our grandmothers and great-grandmothers focused on religion so much more. Grandma and Great-Grandma took Holy Thursday and Good Friday much more seriously. They build up to the big celebration of the Resurrection.

The story of the Passion of Jesus Christ (well, at least the Catholic version, anyway) usually begins on the Sunday before Easter. On the liturgical calendar, this is Palm Sunday. The story of Jesus’ entry into the city of Jerusalem is told at Mass. The faithful sharpen their spiritual focus for the climax of Lent. Monday, Tuesday, and Wednesday of Holy Week don’t really involve changes in the regular routine. Those who went to weekday Mass kept doing so. Kids went to school. That’s changed in recent times. Families escape home for a few days on the Mississippi/Alabama/Florida Gulf Coast. (In recent years, that trend has reversed, particularly with high schools. Because parents can’t seem to tell their kids no, the schools remain in session on Monday thru Wednesday. The underage drinkers and drivers can’t run to Florida for spring break.)

So, on Wednesday, kids dash out of school in the afternoo. They anticipate a break that runs at a minimum to the following Tuesday. Some schools take all of the following week off. Either way, the family’s home on Thursday, and that’s important, because there was work to be done. Momma had to make sure the family had clothes ready for not only the Big Day, Easter, but for Mass Thursday night and Friday’s religious activities. Food was also a big issue on Holy Thursday, because everyone was going to be at the big Mass that evening. Friday involved the Nine Sisters, so that meant there wouldn’t be much time for cooking then, either.

The first big liturgical event since Palm Sunday is Mass on Holy Thursday. It’s usually one big parish event, featuring the “washing of the feet”. While every celebration of the Eucharist is a remembrance of the Last Supper, this is the one that syncs with the calendar.

As a kid growing up in the late-sixties/early-seventies, the one thing about Holy Thursday’s Mass that always struck me were the “smells and bells”. This was the time when the instructions from the Second Vatican Council were starting to kick in full-on, and two big themes that stood out in the mind of a fifth-grade altar boy were the transition of the liturgy from Latin to English, and the toning down of the various ceremonies. Even in parishes that had pastors totally committed to Vatican II, Holy Thursday and Easter Sunday were “High Mass” days, complete with the choir, the good vestments, incense, and ritual.

The choir worked overtime on Holy Thursday, singing before Mass, leading the congregation in singing the responses during Mass itself, then singing while the church was “stripped” of all the linens, and the statues were covered for Good Friday observances. Once the church was stripped, we reached the part in the script where bad things happen, so the choir ended, and everyone went home. Good Friday is the most solemn day in the liturgical year. Observing the death of Jesus meant quiet time for the kids in many devout households. It also meant unsupervised time, as the men and women of the neighobrhood either observed Good Friday at the parish church, by pitching in to do clean-up work, or even just kneel in prayer for a large part of the day. In Uptown New Orleans, Good Friday meant walking the Nine Sisters. Visiting nine churches on Good Friday is a French-Spanish tradition that can be traced back to the Spanish Colonial period. Given the distance covered in the traditional Uptown-to-Downtown walk, the tradition was either also observed in Germany, or the Germans and the Irish picked up on it from the Creoles of the city.

Why nine churches? There’s a lot of speculation on that one. The closest thing to a nine that ties with Holy Week is that there are nine days from Jesus’ Ascension into Heaven and the coming of the Holy Spirit on Pentecost. Of course, these events happen weeks after Good Friday, but let’s not quibble. In modern times, the list of nine churches has been expanded to fourteen, a more-logical number, since there are fourteen Stations of the Cross.

The route of the Nine Sisters: Start at St. Stephen’s on Napoleon Avenue, Walk around the corner to St. Henry’s, on Berlin Street (Now General Pershing St.) From there, walk to Our Lady of Good Counsel, on Louisiana Avenue at Chestnut Street. Since the post-Katrina consolidations of parishes done by the archdiocese, all three of these churches are part of the same parish, under the same pastoral management. The seat of the parish is St. Stephen’s, but they open the other two until noon for Good Friday devotions. 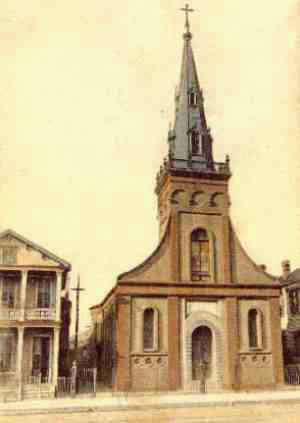 The next church has varied over the years. Most likely, it was Notre Dame de Bon Secours (Our Lady of Prompt Succor), the “French” church of the three churches that made up the “Redemptorist parish” that serviced the Garden District and the Irish Channel. After that church burned down in the 19th Century, the faithful most likely stopped at the chapel at the residence of the Redemptorists, on Prytania and Third Streets.

Nowadays, the Redemptorists are gone from New Orleans. The order sold their Third Street residence to Anne Rice, who told the Catholics of the Garden District to go down to St. Mary’s Assumption, on Constance and Josephine Streets, in Da Channel. The wealthy folk of the Garden District opted to resurrect the old Notre Dame church, in an interesting way. When the church we know as St. Mary’s Assumption was constructed in the 1850s, the Germans dismantled the wooden church that was on that corner, moving it to St. Joseph Cemetery, on Washington Avenue and LaSalle Street.

It stayed there for 150 years, serving as a mortuary chapel. That chapel was moved to Jackson Avenue, so now it becomes the Fourth Sister, in the 1500 block of Jackson Avenue. From St. Mary’s Chapel, the path turns towards the river, and the faithful stop next at St. Alphonsus. St. Alphonsus is the “Irish church” of the Redemptorist parish. After performing their Veneration of the Cross at St. Alphonsus, the next Sister is directly across the street, St. Mary’s Assumption.

After stopping in at the “German church”, it’s a ten-block walk to the Seventh Sister, St. Theresa of Avila, on Erato Street, in the Lower Garden District. From there, the second-to-last stop is the other Irish parish, St. Patrick’s on Camp Street, in the Warehouse District. From there, the trek ends at the Church of the Immaculate Conception, better known as “Jesuits’ Church” on Baronne Street in the CBD. Then followed the walk back to Jefferson City or Faubourg Bouligny.

It’s only logical that momma wouldn’t want to cook a lot of food on Good Friday. After all, that walk from Napoleon Avenue to Canal and Baronne in town is a big effort. Even if you take the streetcar back, a big chunk of your day is used up. No time to cook! That’s never been too big a challenge for Creoles and Yats, though. Momma knows how to prepare ahead.

No, the big challenge for Holy Week is the dietary restrictions that used to be enofrced by the Church on Good Friday. Even a lot of good Catholics forget that Lent was much tougher on the faithful than it is now. Lent wasn’t merely a time of paryer and reflection, but also a time of fasting. In this context, “fasting” usually meant having only one meal a day. Coffee and a piece of toast for breakfast, followed by a light lunch, like a hard boiled egg, or maybe a Mrs. Drake’s chicken salad sandwich. Over time, those restrictions were eased; fasting was cut back to just Ash Wednesday and Good Friday.

But back in momma’s day, it was fast and abstinence on Good Friday. That meant not only one meal, but no meat! For Catholics in New Orleans, that wasn’t hard to deal with, just eat seafood. Fish, shrimp, oysters, the possibilities were endless.

But, for many of the faithful, substituting fried shrimp or oysters for chicken or pork just wasn’t good enough. There was no sacrifice. Additionally, seafood wasn’t as ubiquitous or inexpensive fifty years ago as it was now. Some folks just couldn’t afford to have a shrimp fry. The common New Orleans solution to the problem of keeping costs down was to make dishes that stretched the resources, like jambalaya, gumbo, red beans that taste like ham because of the bone, but didn’t have any real meat in them. Momma was creative, like her momma before her.

But when it came to making a filling meal with no meat or no shellfish, momma knew what to do. Greens. Herbs. Spices. Momma knew from her Creole ancestors how to make a roux, then combine the green stuff to make Gumbo z’Herbes. The meatless version of our classic thick soup was just the right meal for Good Friday. It’s gumbo, so it’s easy to prepare ahead of time. Momma could put the proper time in to make a roux and let the soup simmer, then put it aside overnight. When she came home from making the Nine Sisters the next day, all she had to do was put the pot back on the fire and heat things up. Judy Walker gives us the recipes for two versions of this wonderful soup in her NOLA.com column.

Gumbo is a filling soup. A good roux of fat and flour, thinned down with water or stock, could be a meal in itself. Add in a lot of green goodness (Chef Leah at Dookey Chase says there are nine different kinds of greens in her gumbo), and you get an even more filling dish. Even when we try to sacrifice, we just can’t make it happen. Gumbo z’Herbes is the closest thing to the “bread of affliction” we’ve got in New Orleans.

Meat in your Gumbo z’Herbes!

When you go to see Chef Leah Chase at her restaurant on Holy Thursday, you get Gumbo z’Herbes and Fried Chicken. Her gumbo is different from the traditional, meatless dish. Why? That should be obvious. She’s not serving it on Good Friday, and the meat she adds makes the soup taste wonderful.

But wait, you say, Ms. Leah has sausage and chicken in her Gumbo z’Herbes! Yes, that’s correct. That’s because she’s serving it on Holy Thursday, when there’s no restriction on meat. Some cooks, when making Gumbo z’Herbes for Good Friday would make extra gumbo base (roux, water, basic stock vegetables) and then whip up a chicken-and-sausage gumbo for dinner on Thursday. If momma was particularly busy, she’s just make extra Gumbo z’Herbes, adding the meat. The irony of gumbo during Holy Week is that it’s a wonderful food that doesn’t distract from the important devotional activities.

It’s why folks from everywhere else just don’t understand us.