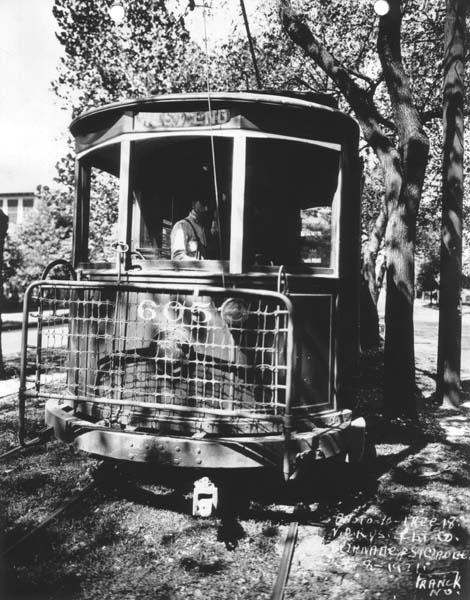 NORwy&L 605, on Esplanade Avenue, October 8, 1921. New Orleans Railway and Light was testing the clearance of trees on the neutral ground on Esplanade, as part of a lawsuit or threat of a lawsuit. This is one of a sequence of Franck Studios photos (Franck was the photo studio used by NORwy&L and NOPSI lawyers).

The streetcar is an American Car Company “Palace” streetcar. These streetcars were first introduced in St. Louis, to provide transportation for the 1904 World’s Fair in that city. New Orleans Railway and Light Company ordered Palace cars for use in New Orleans, putting them into service in 1915. NORwy&L was created that year to consolidate street railway operations under a single entity.

The Palace cars were luxorious, wider than the Perley A. Thomas streetcars we’ve seen on the St. Charles line for decades. That width, however, is what created the problem on Esplanade Avenue. Palaces were used on the Canal and Esplanade Belts, as well as on the “Royal Blue Line” on Napoleon Avenue.

The Palaces were retired by the mid-1930s. By that time, NOPSI had standardized on the arch-roof cars we know today.