Morning Call in the French Market 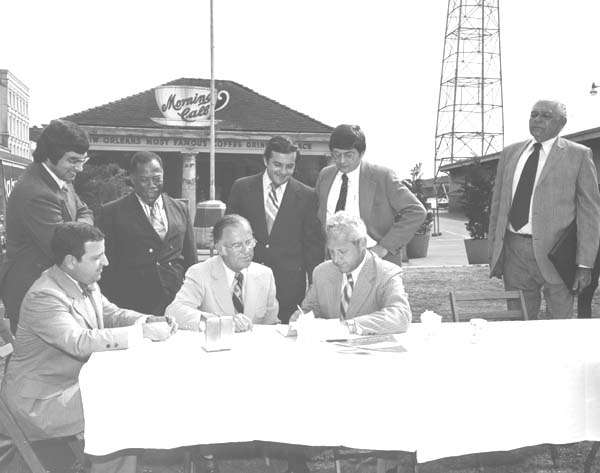 Moon in the French Market. This is from 1973 (NOPL caption below), so that means Morning Call would only be there for another year, when it would move out to 17th Street in Metairie, across from Lakeside Mall. Morning Call returned to the city three years ago, opening up a stand in the Casino building in City Park.

An interesting side note here is the presence of Clay Shaw, standing on the far right. Shaw was the target of New Orleans DA Jim Garrison’s conspiracy theories concerning the JFK assassination. He was eventually acquitted, and continued to work on various municipal projects.

Here’s how NOPL captioned this photo in 2002.

Mayor Moon Landrieu signs documents for the renovation of the French Market, 1973. Seated next to the Mayor is French Market Corporation President Armand J. Duplantier; standing, third from the left, is FMC member Joseph C. Canizaro. That’s Clay Shaw standing off to the right. Shaw had been a member of the FMC from 1971 until he resigned in 1972 in order to take the job as Project Manager for the renovation project.The Morning Call Coffee Stand, unfortunately, did not survive the project, and moved to Metairie later in the 1970s.