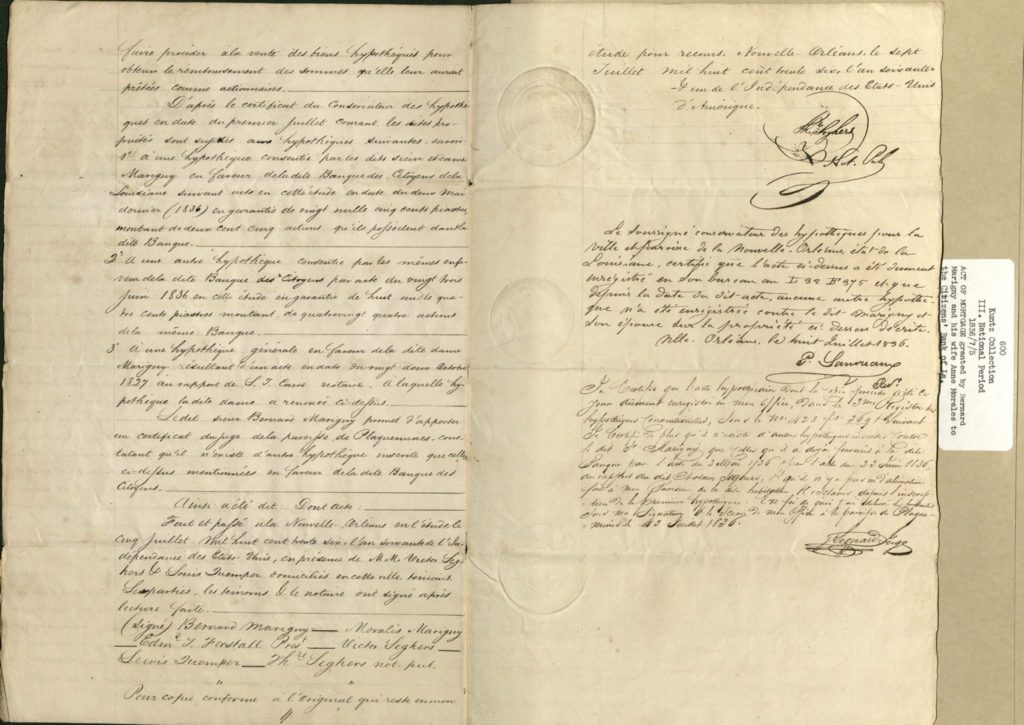 Bernard is the man the neighborhood is named after. He inherited Marigny Plantation in 1806. Almost immediately he subdivided it, turning the plantation into New Orleans’ first neighborhood outside the French Quarter. He was still selling lots into the 1820s,

Marigny was quite the rake, and that lifestyle isn’t cheap. Property owners have it easier than a lot of folks in terms of financing an extravagant lifestyle. It’s easy for them to pay the bills, because all they have to do is sell off something, like lots in a subdivision. He took an interest in horse racing in the 1830s. Marigny founded the Louisiana Race Course, located on what now is the Fair Grounds Race Course. The first races at his track were held in 1839. Borrowing money in 1836 fits with the timeline for this project.

This is mortgage document is written in French, so I don’t know the details. I’m quite curious to see what he was borrowing against. Marigny would have been fifty-one in 1836 (he died in 1868, at the age of eighty-one).

One of the cool things about primary sources such as this is that they bring larger-than-life characters like Marigny down to earth. Here’s the guy who had connecitons to the Battle of New Orleans, brought the dice game Hazard to the New World, where it morphed into what we now know as “craps”, and expanded the city’s footprint. Did he run out of property to sell by 1836? What did he own that he could borrow against? Analyzing antebellum mortgage documents is an interesting twist on forensic accounting.

If any of y’all can read the French here (and the script it’s written in), please, please let me know! Will pay in beer or burgers for some insight into Marigny. 🙂