Chalmette Battlefield and the end of the War of 1812 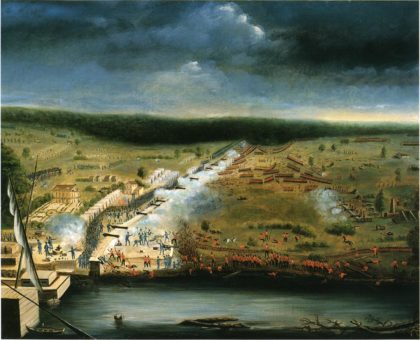 “The Battle of New Orleans at Chalmette” Painting by Jean Hyacinthe de Laclotte (1766 – 1829), a member of the Louisiana Militia who participated in the battle; painted by him after the victory based on his sketches made at the scene

Chalmette Battlefield, was where the main clash between the forces of the United States and Great Britain in the Battle of New Orleans took place. The land battle occurred on Jan. 8, 1815. That action didn’t end the campaign. In the aftermath of the battle, stories and myths surrounding it popped up. The real story, while not as colorful as the rumors, is still fascinating. 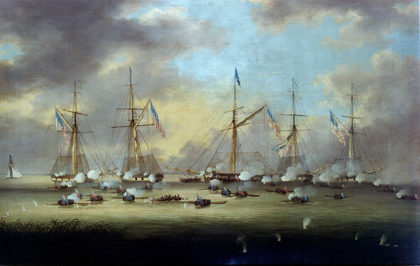 Many think of the “Battle of New Orleans” as one confrontation in January 1815. It was actually a campaign that began in September, 1814, in Mobile Bay. Major General Andrew Jackson made the strategic decision to fall back from Mobile. So, he decided to defend the most important city on the Gulf Coast — New Orleans. The British advanced in his wake. The first engagement near New Orleans was on Dec. 14, 1814. It was the Battle of Lake Borgne. Sir Edward Pakenham arrived on the scene on Dec. 25. Pakenham ordered a reconnaissance-in-force for Dec. 28. This set the stage for the main engagement. Even on Jan. 8, the British advanced on the city from both sides of the river. This forced Jackson to set up defenses on the West Bank as well as Chalmette. 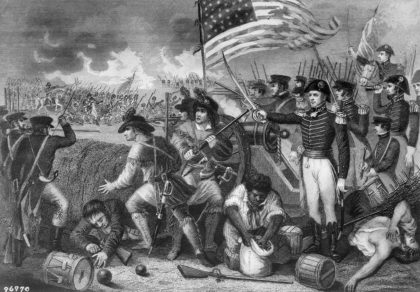 The land battles of the New Orleans Campaign ended Jan. 8, 1815. It was a decisive victory for the American forces under the command of Jackson. That didn’t end the campaign, though. Vice Admiral Alexander Cochrane, in overall command of the British expedition, sent a squadron of four ships up the Mississippi River to attack Fort St. Philip. The fort (there was no “Fort Jackson” yet, across the river). Fort St. Phillip was the main point of defense on the river. It was located in what is now the East Bank of Plaquemines Parish.

The importance of Fort St. Phillip diminished over time, as the larger Fort Jackson was built and became the focal point of the defense of New Orleans in the Civil War. The Royal Navy ships bombarded Fort St. Phillip for 10 days. The fort’s defenders did not give up. The distance bombardment was unsuccessful, which meant the RN ships could not move further upriver. This was the last chance the British had: even though Jackson found success on the battlefield, warships anchored in the river across from the French Quarter could have compelled him to surrender the city. 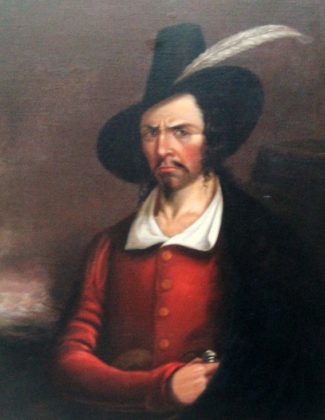 There are many stories and legends surrounding the pirate Jean Lafitte at this time. Some attribute the failure of the Royal Navy to get upriver and assist the army to some sort of intervention by Lafitte and his crews. There’s no clear evidence to support this. Since Lafitte was not present at Chalmette, speculation continues. Lafitte’s influence on the outcome was significant. Lafitte provided two companies of skilled artillerymen to Jackson, one under the command of Dominique Youx.

Youx was one of Lafitte’s captains and a trusted subordinate. Jackson’s original concern, and his original plan for Lafitte’s men, was to place them at Fort St. John. Locals know this fort as “Spanish Fort”. It’s located where Bayou St. John meets Lake Pontchartrain. They were there to block any attempt by Cochrane to penetrate New Orleans from the north. It became clear that the British would advance from the east, via St. Bernard Parish. So, Jackson moved Lafitte’s men to Chalmette. Their expert handling of artillery batteries along the Rodriguez Canal redoubt made a major contribution to the British defeat.

Lafitte’s crews made a much more significant contribution than the “Kentucky Riflemen” of legend. On Jan. 4 and 5, Jackson’s command at New Orleans was reinforced by a large contingent of men from Kentucky. Accounts place the size of that contingent at anywhere from 1,000 to 2,300 men. All accounts indicate that those men were poorly clothed and mostly unarmed. Fewer than 100 of them had their own weapons, so the overwhelming majority of these men had to be armed with whatever could be scraped together in the city.

When Jackson ran for president, the story of Kentuckians supporting New Orleans was embellished a great deal to make the general look more the hero. While the additional manpower along the redoubt certainly did not hurt, its impact was significantly less than the legend claims. The “Kentucky Riflemen” were no doubt good shots and could fire with accuracy from longer distances than their musket-bearing opponents, but there just weren’t enough of them. What caused the most carnage on Jan. 8 was artillery fire from the batteries along the redoubt. The American artillery fired volley after volley of “grapeshot,” turning the cannons into massive shotguns. All those smaller balls and pieces of lead cut down the British officers.

Jackson kept his army in the field for two weeks after the carnage on Chalmette Battlefield. After the deaths of Major Generals Pakenham and Gibbs on the field at Chalmette, as well as Lt. Colonel Dane of the 93rd and a significant number of other field-grade officers, the command-and-control of the British force was destroyed. With no orders to either advance or retreat, soldiers withdrew from the rain of death coming from the American batteries, but then froze in place. By the time Major General Lambert arrived and assumed command, it was too late. The British had already suffered horrific casualties, and lacked officers to turn the commander’s orders into specific tactical instructions at the company level. All Lambert could do is order a withdrawal from Chalmette. He then pinned his hopes on the Royal Navy.

Map of the British Advance on New Orleans, December, 1814 (USMA)

When it became clear that the naval attack would not give the British the city, Lambert sent a messenger to Jackson on Jan. 18, suggesting an exchange of prisoners. Jackson agreed, and the British began a full retreat. Jackson was not in a position to pursue Lambert and the British survivors. Most of his “army” consisted of volunteers capable of holding a defensive position, but not acting as an attacking force.

Jackson did send a squadron of cavalry to harry the British, “encouraging” them to continue their retreat. Jackson finally allowed the rest of his force to return to the city on Jan. 21, arriving to a hero’s welcome on the Jan. 23. The last of the British force made it back to their ships by Jan. 27, 1815, marking the end of the New Orleans Campaign.

On the way out, Cochrane and Lambert made one last attempt at establishing a British foothold on the Gulf Coast. On Feb. 12, 1815, the British captured Fort Bowyer, on Mobile Bay. Word of the Treaty of Ghent came to them as they prepared an attack on the city of Mobile, so they packed up and sailed for Britain.

Changing the Course of History

There are several big takeaways from the Battle of New Orleans. The biggest is that the American victory brought the War of 1812 to a clear conclusion. Had the British captured New Orleans, they might not have acknowledged the end of the war. New Orleans was the second-largest city in the United States, and control of the Mississippi River was essential to the nation’s security and growth.

A British occupation of New Orleans may still have only been temporary, but it could have forced a reopening of treaty negotiations. The British never recognized Napoleon Bonaparte as a legitimate ruler, so they might have challenged the validity of the entire Louisiana Purchase. Certainly the culture of New Orleans as a community would have changed dramatically, under the control of a British occupation force. 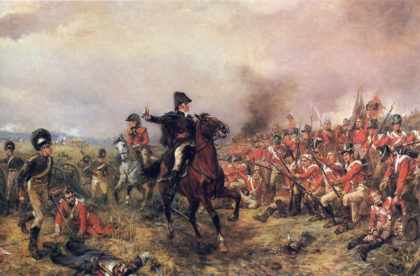 A second important outcome of the Battle of New Orleans was its impact on the Battle of Waterloo. The British have heralded the victory at Waterloo for almost 200 years now, but it’s important to remember that, at the time, Wellington characterized the battle as “a near-run thing.” An occupation of New Orleans and possible British expansion into the territory of the Louisiana Purchase would have stretched the British Army incredibly thin. Further speculation is the stuff of “alternative history” novels, but certainly things in Europe might have been quite different had the British not been sent home from New Orleans in defeat. 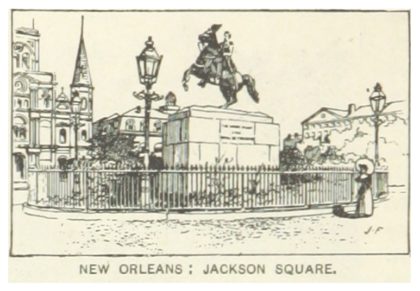 Jackson Statue, from King’s Hand-book of the United States planned and edited by M. King. Text by M. F. Sweetser

The single individual to benefit most from the New Orleans Campaign was Andrew Jackson. The victory on Jan. 8 made Jackson not only a hero in New Orleans, but a national figure.

He became Military Governor of Florida in 1821. Jackson led battles against the Seminole tribe. Success in the Seminole War returned him to the U.S. Senate in 1823. He ran for president in 1824. After losing an acrimonious campaign to Adams that year, he ran again, four years later. Jackson won, becoming the nation’s seventh president. In New Orleans, the Place d’Armes in front of St. Louis Cathedral was renamed “Jackson Square” in 1851. An equestrian statue of Jackson was commissioned and erected in the square five years later. 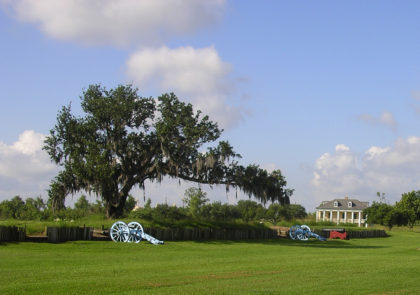 The final big takeaway of the Battle of New Orleans was its impact on tourism. The land that is Chalmette Battlefield, near the Rodriguez Canal, was considered hallowed ground by many in the city, and the State of Louisiana purchased this land in 1855. Plans began to construct a monument on the battlefield, which was finally completed in 1908. The state turned the battlefield over to the federal government in 1930.

Up to the start of the Civil War, Jan. 8 was considered a major day of celebration in New Orleans, and many would make the trek down to Chalmette to visit the battlefield. The Union Army sectioned off a portion of the “British side” of the battlefield property to make a military cemetery for both Union and Confederate troops in 1864. The cemetery, along with the battlefield, passed to the National Park Service in 1933.

NPS maintains the Chalmette National Battlefield as part of Jean Lafitte National Historical Park and Preserve. It is open year-round. Early January is a busy time at the battlefield. Volunteers gather to present “living history” demonstrations, include a re-enactment of the 8-January-1815 battle. Events for 2017 are from January 4-8. This is typical for the annual commemoration of the battle.

While it’s a lot of fun to get down to the battlefield, many folks don’t have time. Be sure to check out the exhibits at The Cabildo, one of the Louisiana State Museum’s properties. Located next to St. Louis Cathedral at Jackson Square, the Cabildo features a number of BNO-related items. Additionally, take a look at tours, lectures and other events sponsored by the Friends of the Cabildo.