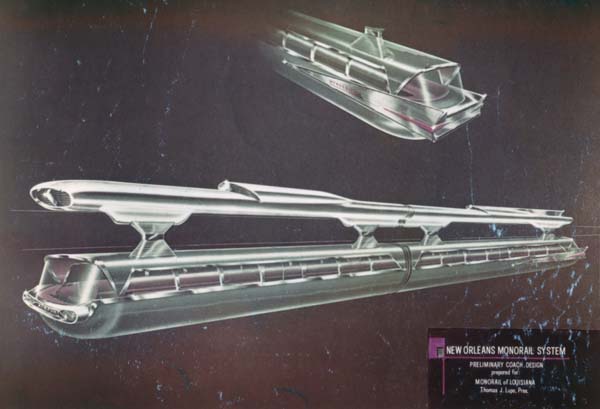 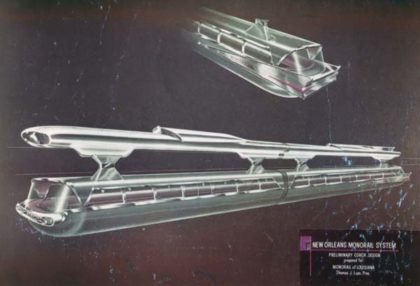 Concept sketches of a monorail system for New Orleans, 1960

I came across the New Orleans Monorail Project back in 2004, when I was doing research for my Canal Streetcar book. The concept was to connect the Central Business District with Moisant International Airport (MSY – now Louis Armstrong New Orleans International Airport). When Walt Disney debuted the Disneyland Monorail System in 1959, a number of cities investigated the feasibility of monorails in their backyards. The difference between fantasy and reality set in quickly, however, as studies showed the difficulty of building overhead rail in established neighborhoods. Disney didn’t have to contend with the numerous complications of urban mass transit. All Walt had to do was draw lines on a blueprint, and his people made magic. 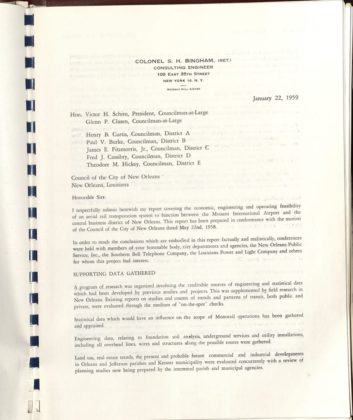 The monorail project never became reality, although City Hall commissioned a study, by a consulting engineer, Col. S. H. Bingham (ret), of New York. Like ambitious projects of this sort, no doubt the politicians weighed the obstacles and cost and decided it wasn’t feasible. In the long run, though, this was the sort of project that should have been taken on. Like the Louisiana Superdome project, ten years or so later, there are big payoffs. The Dome was paid off by the city’s hotel-motel tax. Had the mayor and council chosen, they could have found a way to finance a monorail that would likely still be in operation today.

Streetcars to the Airport 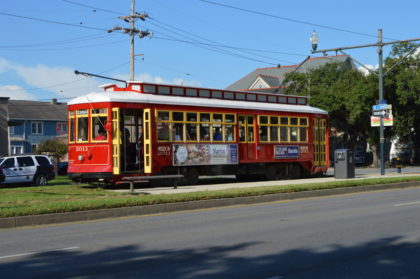 So, the city never connected the CBD and the airport via overhead rail. That didn’t stop the dreamers. When the Earhart Expressway was constructed, one of the plans was to continue the road further west. The existing expressway comes to an end at Hickory Street in Harahan. There were plans laid out to keep going, all the way to the airport. When the New Orleans Regional Transit Authority (NORTA) re-constructed the Canal streetcar line in 2003-2004, the notion of streetcars to the airport came up. Elmer Von Dullen, then-manager of NORTA’s Rail Department, designed the 2000-series streetcars used on Canal with a maximum speed of over 40mph. You’ll never see a streetcar on Canal go that fast! The idea was that the 2000-series would be able to handle the challenge of going out to the airport.

Alas, that project also never came to pass. Those of us who go to MSY regularly can still dream.