We’re on the @BeyondBourbonSt Pod!

Beyond Bourbon Street and the Battle of New Orleans

Catch us on the latest ep of Mark Bologna’s “Beyond Bourbon Street” podcast this week. We had a great time talking about the Battle of New Orleans, out at The Original Fiorella’s Restaurant, in Gentilly. 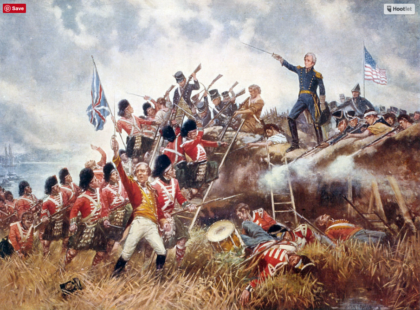 Battle paintings from the 19th Century

When you go over to the show page, you’ll see Mark used the Edward Percy Moran painting of the battle as the page’s main image. It’s a fantastic depiction of a Napoleonic-era battle, but it’s got a few factual inaccuracies.

So, why did Moran paint the battle this way? After the Summer of 1815, and the Hundred Days’ Campaign in Europe, painters across Europe romanticized the final battles of Napoleon’s reign as Emperor of the French. British painters focused on Wellington’s victory at Waterloo. It’s only logical to romanticize the biggest American victory of the war of 1812 in a similar manner.

The same thing happened with paintings of naval battles. Just as British artists made epic paintings of Lord Nelson’s victory at Trafalgar, American artists painted the naval victories of the United States Navy in a similar fashion.

Not that any of this talk of paintings lessens the importance of the American victory at New Orleans. As we discuss in the podcast, the implications for both North America and Europe were huge. Had the battle gone the other way, the maps of both continents may be totally different today. In fact, now I’ve got some ideas on alternate-history stories!