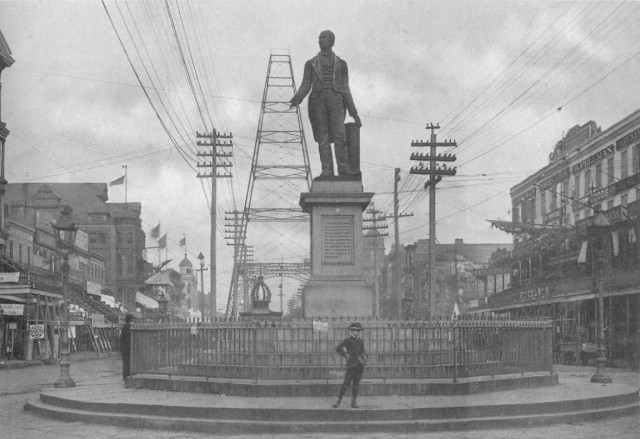 Dr. Campanella wrote a piece for da paper today on “moonlight towers”, the big structures erected in urban centers in the late 1800s, as a first step in providing electric street lighting. When Susan Granger shared it to our New Orleans group on Facebook, Froggy added a link to some photos in the Commons, showing moonlight towers. 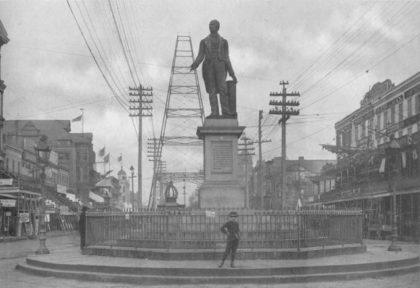 This photo of the Clay Monument is from 1892. The moonlight tower is visible in the rear. If the size of statues is any indication, Henry Clay was incredibly popular in antebellum New Orleans. The massive monument to him, located on Canal Street, at the intersection of Royal Street and St. Charles Avenue, remained in place until it was moved to Lafayette Square, in 1901. 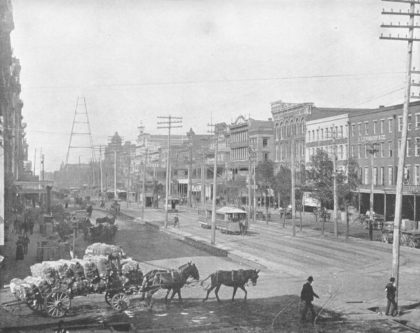 A big cotton wagon crosses Canal Street at Carondelet Avenue, in 1890. Better view of the moonlight tower. The cupola of the Mercier Building, later Maison Blanche Department Store, is visible in the background, through an electric pole’s cross beams.

Cut down to size 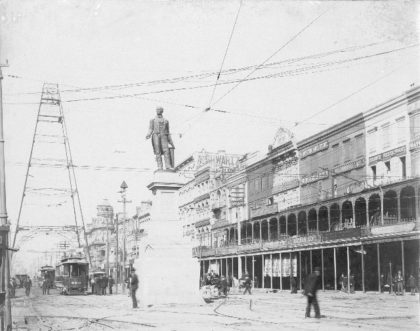 Here’s Clay again, sometime after the Canal streetcar line was electrified, and the statue was relocated. You can see the base of the monument has been removed, so tracks would run straight through the intersection. Even then, the cars passed too close to the statue.

Location of the tower on Canal

The tower on Canal Street was positioned at Canal and Dauphine, It cast its light in a 360-degree radius, extending for blocks around. This meant it illuminated the street as far back as Basin Street and the Southern Railway terminal. Even though electric lighting evolved from this format into storefront lighting and individual street lamps, most stores closed around 5pm-6pm in the evening at this time. Night hours were still decades away.