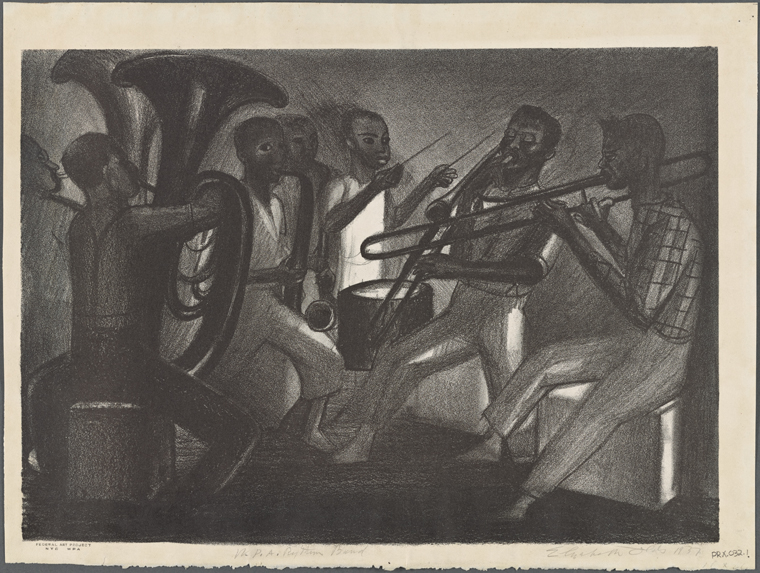 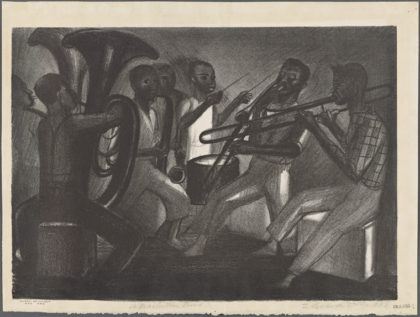 This is a wonderful lithograph by Elizabeth Olds, done as part of a WPA-funded project in New York. From Olds’ bio on Wikipedia:

From 1935 until the early 1940s, Olds was a nonrelief employee for the Works Progress Administration-Federal Art Project (WPA-FAP) in the Graphic Arts Division in New York,[8] where she helped younger artists in the silkscreen unit.[9] She also joined the American Artists’ Congress, Artists Union, and other groups with similar interests.[6] Olds became friends with Harry Gottlieb, another nonrelief artist who also focused on industrialism.[6] Together, they observed the mining and steel industries of New York, and their research lead to Olds’s creation of her award-winning print, “Miner Joe.”[10] Olds used both silkscreen and lithography for the prints for ‘‘Miner Joe,’’ but it was her lithograph that won first place for the Philadelphia Print Club competition in 1938.[10]

Jazz speaks to us in many ways. Olds, working with younger artists in New York, She’s teaching them how to do silkscreen and lithos, is inspired by a jazz band. The traditional brass band is an archetype; this scene could be from NYC, Baltimore, Chicago, Los Angeles, or here in New Orleans.

I hesitate to say “especially New Orleans,” because sometimes we forget just how far jazz spread after Bolden. The musicians who left during the Great Migration went far and wide. We hear about King Oliver, Dutt, Pops, and the other icons of jazz, but there were journeyman musicians and others who left, bringing their horns to factories and other jobs in the north. They played casually, maybe on a stoop, passing the music on to others in their new neighborhoods.

I like to think this is what Elizabeth Olds captured, as she did her own part in passing on skills that encourage art and creativity.

The WPA kept a lot of folks going in dark times. It wasn’t about just roads and bridges, and our culture is much the better for that.