The Ashton Theater in Hollygrove – a classic neighborhood movie palace 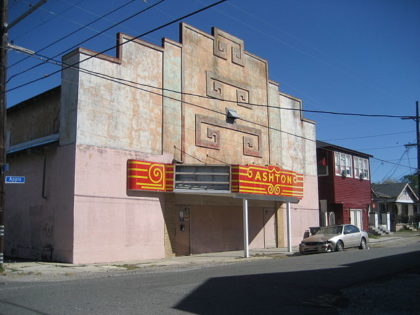 A friend asked me yesterday what I knew about a theater in her new neighborhood, The Ashton. Hollygrove/Leonidas isn’t my ‘hood. So my answer was, not much. My curiosity was piqued, though. I did some basic research. It’s not all that unique but interesting. The building was a typical neighborhood theater. You found these all around the United States in the days before television. It opened in 1927, a time when radio was just coming on the scene. The average American got their news from the local paper, and radio was speeding up that process. Movies made it possible to add visuals to that knowlege base. Theaters would show “newsreels” before the feature film. The news in those newsreels was way dated by the current standards of the 24/7 media beast we feed today, but they satisfied the public’s need to see what was going on.

The Ashton Theater was designed by Ferdinand L. Rousseve. Rousseve was a New Orleans native who was a descendant of a Battle of New Orleans veteran. He attended Xavier University, as well as Coyne Trade and Engineering School in Chicago. Rousseve received an engineering degree from Coyne in 1924. So, the Ashton was one of his first design jobs. He went on to have a distinguished career, both as an architect and a civil rights leader. In 1947, Rousseve became the provisional chairman of the Urban League of New Orleans. Upon moving to Boston, Rousseve remained active with the Urban League. He earned a Ph.D. from Harvard University in 1948. Rousseve became chairman of the Fine Arts Department at Boston University in 1958. He died in 1965.

The Ashton is located at 8437 Apple Street, which is one block off Leonidas, two blocks off Claiborne, in Hollygrove. Hollygrove is an “uptown backatown” neighborhood. It’s close to both S. Carrollton and S. Claiborne Avenuses. So, that makes the area easily accessible by bus and streetcar. Hollygrove endured some tough times economically, with crime being problematic. As gentrification hits other neighborhoods, it’s naturally spreading into Hollygrove as well.

Ashton Theater had a Reproduco pipe organ installed. I don’t know if the organ is still in the building. It closed in 1958. The building is now privately owned. While this neighborhood got a good bit of flood water during Hurricane Katrina, it survived. It’s now an artist’s studio.