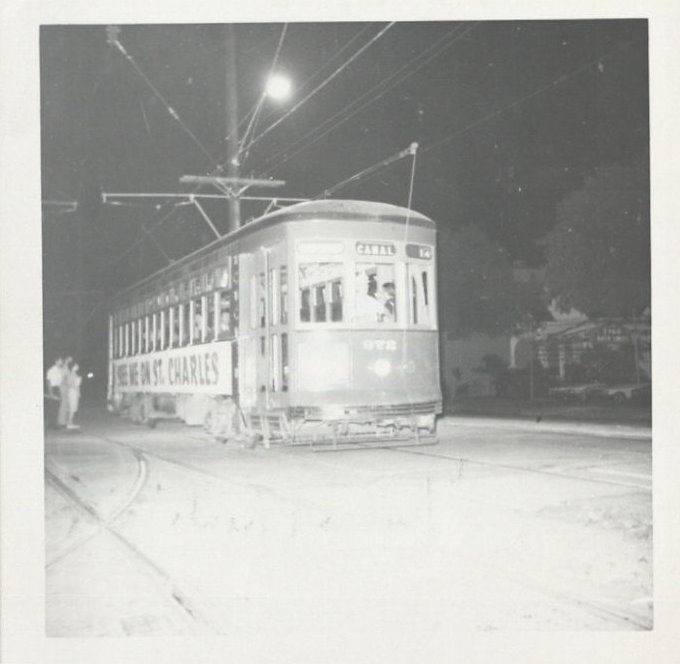 The Last Streetcar on Canal (for forty years) 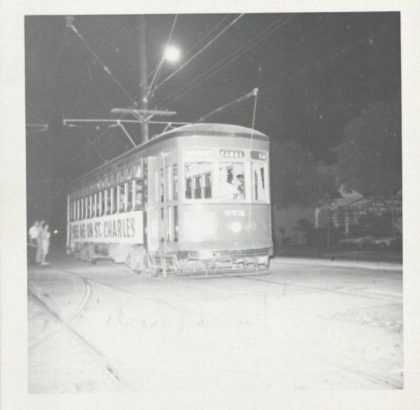 NOPSI 972, coming out of the barn on Canal Street for the last time. (Courtesy Tulane LaRC)

The last day of regular service on the old Canal line was May 30, 1964. There are a number of interpretations as to which run was the “last” streetcar. Irby Aucoin’s famous photo from the night before is arguably the last “revenue” run. This car, 972, the next morning, was the last streetcar on the two-track main on Canal. That wasn’t a “regular” run, however. NOPSI started cutting down the overhead wire right behind 972. There were slowdowns to the point where that last trip took hours instead of minutes. Still, that banner on the side was big news, as 972 switched off of the Canal main track. When the car turned onto the third track that makes the turn to St. Charles Avenue, Canal service was gone.

When 972 turned onto St. Charles that morning in 1964, plans that were long-made came to completion. NOPSI kept 35 of the arch roof streetcars of the 900-series for operations on the St. Charles line. They earned the nickname  “Charlie cars.” Some of the remaining 800- and 900-series cars were donated/sold to museums and private collectors. The rest were unceremoniously cut in half and scrapped. NOPSI had no interest in fighting with the so-called “streetcar activists” that appeared on the scene after the announcement that Canal would be discontinued. So, they cut down the wires, cut up the streetcars, and deployed a fleet of green, air-conditioned, modern Flixible buses.

NOPSI promised the people of Lakeview and Lakeshore “express” bus service that would enable them to get on a bus within blocks of their homes, then ride into the CBD in air-conditioning. No transfer at the foot of Canal Street, to ride a streetcar in sorry shape. No crowds bunched together in the heat, humidity, and rain of the spring and summer. Nothing the uptown folks could do or say would convince the people who actually used the Canal line at the time to change their minds.

Bus ridership changed dramatically during the forty years of no streetcars on Canal. When the red Von Dullen cars took to the street in 2004, people were ready for a ride from City Park Avenue into town. Air conditioning doesn’t hurt, either.

Check out my book, New Orleans: The Canal Streetcar Line, part of Arcadia Publishing’s “Images of America” series, or check out our podcast on “Riding the Belt.”