The Maison Blanche Building – Since 1907 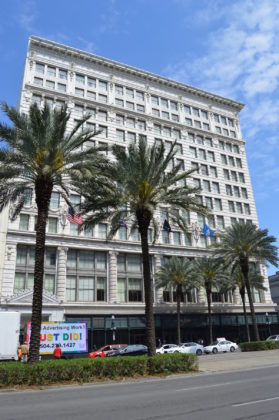 In 1906, S.J. Shwartz’s department store, Maison Blanche, felt growing pains. The Mercier Building, in the 900 block of Canal Street, was home to MB, but Shwartz envisioned something grander. He decided to demolish the Mercier building and build a larger building. The plan was to have five floors of retail space, and seven floors above that for offices. Shwartz demolished the Mercier building in stages, tearing down the back of the building first, so the office tower closer to Iberville Street went up first. With the back finished, they moved the store into the new space. The front of the old building then came down. The facade generations knew as Maison Blanche on Canal went up. Maison Blanche truly lived up to its motto, “Greatest Store South.”

The two towers above the retail floors contained offices for various small businesses. Many doctors and dentists opened offices in the “Maison Blanche Office Building.” A set of elevators and a separate entrance took folks up to the office floors. So many doctors leased space in the MB building, the store opened a pharmacy, so patients could get prescriptions filled before leaving the building. This concerned the Katz and Besthoff drugstore so much, they opened a K&B directly across the street, in the 800 block of Canal.

Maison Blanche operated on Canal Street until 1982. The company closed the original store, but continued to operate the suburban locations. The Canal Street store re-opened in 1984, but Dillard’s closed it permanently when they acquired MB in 1997. The building was sold and re-developed (along with the S. H. Kress building next door) as the Ritz-Carlton New Orleans. The hotel opened in 2000.

After the original building was completed in 1909, the company continued to expand the store. The company acquired the property facing Iberville Street, joining that to the store. During the renovations to turn the store into a hotel, the Iberville side became a separate Marriott hotel. Now, the entire property operates as the Ritz.