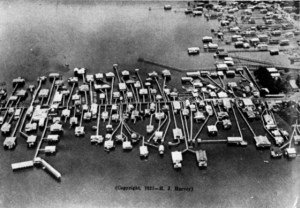 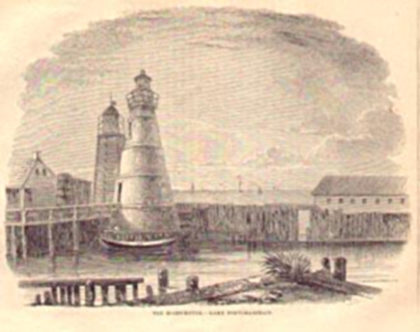 A short drive or bus ride from downtown out to the campus of the University of New Orleans brings you back to one of the oldest neighborhoods in the city, Milneburg. The area is all commercial-use now, but it began as port area, then resort, then an important part of the city’s contribution to the war effort in the 1940s.

The area at Elysian Fields and the Lakefront was swampland when the French established New Orleans near the Mississippi River. The Spanish colonial government, seeing little value in the land, sold it to a Scottish businessman, Alexander Milne. Milne came to New Orleans in 1776, where he started a brick making business. That business became quite profitable after the great fires of 1788 and 1794, when the Spanish ordered the city be rebuilt with brick structures, rather than the wooden ones built by the French. Milne worked to develop his lakefront property, particularly on the eastern side of the city. By 1830, he had encouraged a group of businessmen to form the Pontchartrain Rail-Road Company, which built a five-mile right-of-way, connecting Faubourg Marigny with Milneburg. 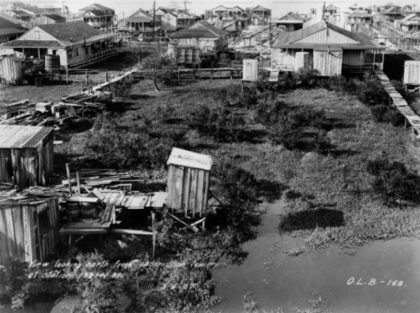 Fishing camps along the lake in Milneburg, 1923 (photo: public domain)

Milne constructed a small port on the lakefront, building a pier which extended out into the lake far enough that ocean-going ships could dock there, and their cargo could be taken by rail to the city. The path from the Gulf of Mexico, through Lake Borgne, to the Rigolets Pass, into Lake Pontchartrain and finally to Milneburg, was attractive to ship captains, since it was faster than coming up to New Orleans from the mouth of the river. To improve safety at the port, the Port Pontchartrain Lighthouse was constructed in 1834. 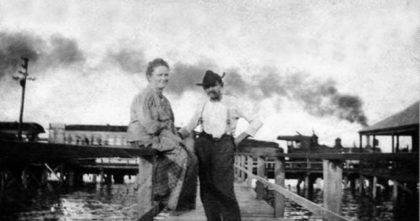 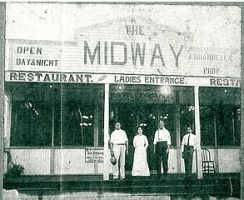 Commercial use of Milneburg boomed during the antebellum years, and continued through the Civil War. The U.S. Navy so totally dominated the Confederate forces in 1862 that New Orleans surrendered without a land battle. Milneburg’s use as a commercial port waned in the late 1800s, but the area continued to be a popular day trip from the city. Saloons, clubs, and restaurants popped up in Milneburg as early as the 1840s. By the 1900s, the area was a network of fishing camps, resorts, and restaurants.

Milneburg also became known for its music. In his biography of Edward “Kid” Ory, Creole Trombone, John McCusker writes of Ory’s memories of busking for tips in Milneburg. Ory and his band would come into the city from LaPlace, and would head out to Milneburg during the day, going from fishing camp to fishing camp, playing for tips. Perhaps it was Ory and his band that influenced a number of Italian-American boys like Sharkey Bonano, who lived in Milneburg to play Jazz. Either way, Jazz stayed in Milneburg even after Ory’s band became well-known and played paying gigs uptown and in Storyville. Younger musicians would ride the “Smokey Mary” (as the Pontchartrain Rail-Road was known locally) out to the resort area, hang out, and play.

Food and music kept Milneburg popular long after its usefulness as a port had diminished. The railroad continued passenger operations until 1932. When land reclamation projects around Bayou St. John and Spanish Fort pushed Pontchartrain Beach further back from the the lake shore, Harry Batt persuaded the city and the WPA to build bath houses and a beach area at Milneburg. He re-opened Pontchartrain Beach at the end of Elysian Fields in 1939. 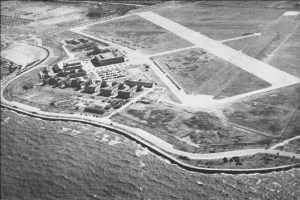 World War II changed the character of Milneburg and the overall lakefront dramatically. The War Department appropriate the land on either side of the amusement park. Naval Air Station New Orleans opened on the western side of Pontchartrain Beach.  On the other side, the Army built Camp Leroy Johnson, a supply depot. The aircraft manufacturer, Consolidated Vultee, built an aircraft factory at the end of Franklin Avenue. Consolidated built  PBY seaplanes there. The assembly line ended at the lake. The planes rolled right out into the lake for testing.

After the war, the Navy moved the air station down to Belle Chasse. They returned the Lakefront base to the Orleans Levee Board. The OLB leased it to LSU. The school opened Louisiana State University in New Orleans, now UNO. The Army gave back the western section of Camp Leroy Johnson to the OLB. The board developed that parcel into what is now the Lake Oaks subdivision. The Consolidated Vultee aircraft plant on Franklin Avenue became an American Standard factory. The Army also gave the eastern portion of Camp Leroy Johnson back to the state. That area became the University of New Orleans “East Campus.” That parcel is now home to the UNO Lakefront Arena and the Privateer Park baseball stadium. The Department of Defense retained the eastern section of the Army base. It’s now home to the Army and Navy Reserve centers, and the local FBI headquarters.

Milneburg the port was long gone by the end of the 19th Century. Milneburg the resort vanished by World War II. Pontchartrain Beach closed in 1983, so now all that’s left of the original town is the lighthouse. Well, that and “Milneburg Joys.”