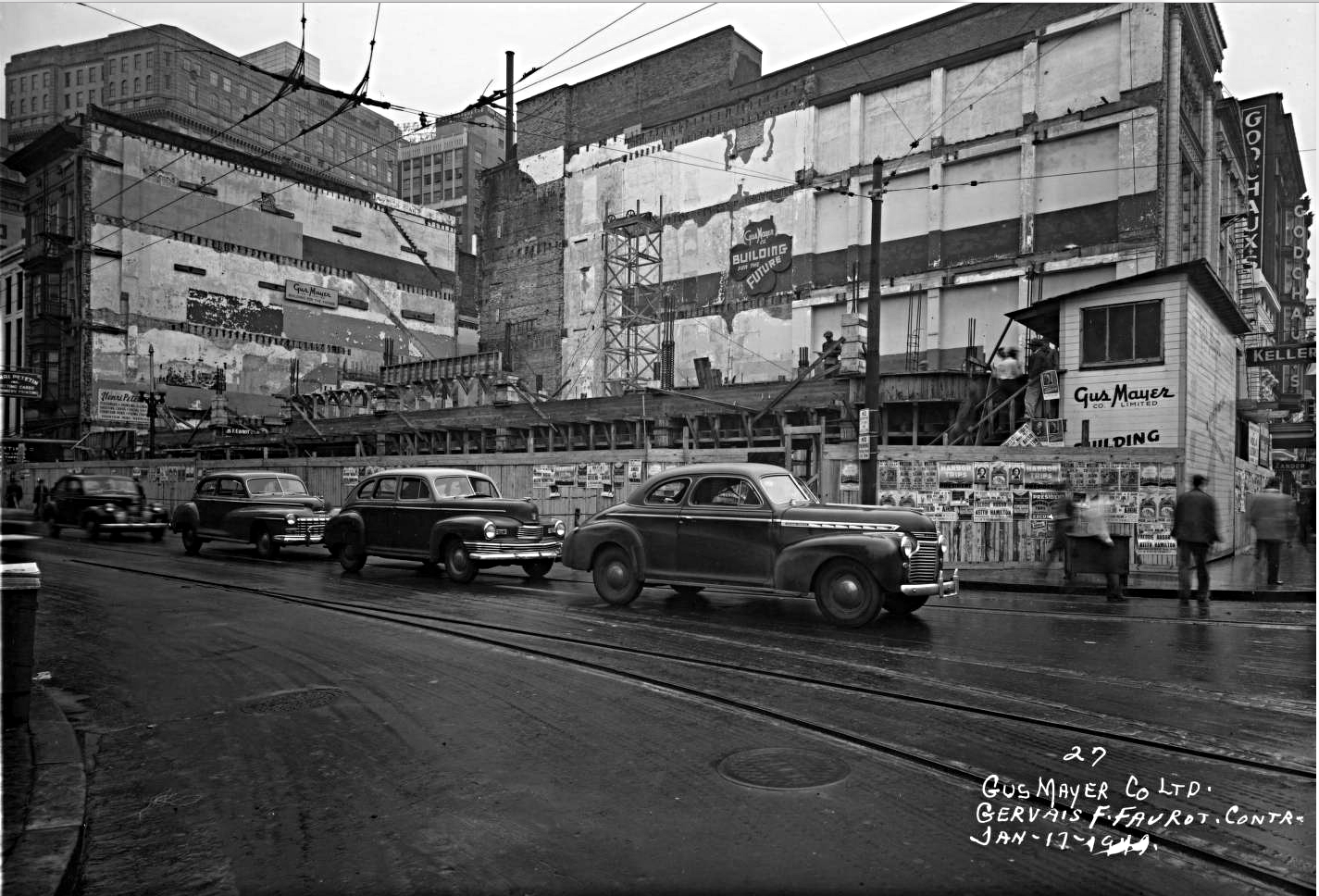 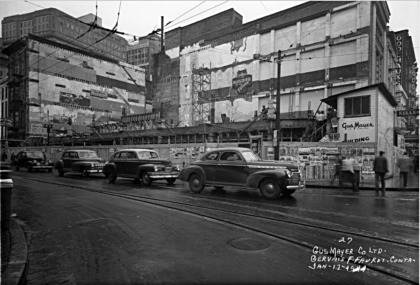 The corner of Carondelet and Canal, January 12, 1949. The old Pickwick Hotel building tumbles to the ground. The New Gus Mayer building appears. The Pickwick Hotel gets its name from the Pickwick Club. So, the club is a private social club that was closely associated with the Mystic Krewe of Comus carnival organization. The building went from hotel to department store in 1897. The 800 block of Canal Street has long been a significant part of New Orleans’ retail scene.

In the 1890s, the two main tenants of the Mercier Building at 901 Canal Street (corner Canal and Dauphine) were dry goods stores owned by Simon Shwarz and Leon Fellman. In 1897, Simon Schwarz pitched a concept for New Orleans’ first department store to his father-in-law, Isidore Newman. So, Newman bought into the idea. As a result, he put up the money to back Schwarz’s concept. All Simon had to do was acquire the entire building. He succeeded, at the expense of his competitor, Leon Fellman. Fellman split with his brother in 1892, leaving the shop they owned in the Touro Buildings (the block of Canal between Royal and Bourbon Streets). Leon opened his own store with a junior partner. They did well in the 900 block, right up until Schwarz got them evicted. Fellman received notice in March of 1897 that he had to be out by October.

Move to The Pickwick

While the Pickwick Club sold the hotel years before, the name stuck. Fellman negotiated with the current owners to convert the building into retail space. He held a going-out-of-business sale over the summer of 1897, and opened on the other side of the street. While Schwarz’s Maison Blanche was flashier than Leon Fellman’s, the latter store offered quality merchandise at discount prices. Fellman rolled with the change.

When Leon Fellman passed away in 1920, his family changed the name of the store from Fellman’s to Feibleman’s. Leon Fellman came to the United States from Germany as Lippman Feibelman. The family operated the store as Feibleman’s on Canal Street until 1931. They moved the store to Baronne and Common that year. In 1936, the family sold their stores to Sears, Roebuck, and Company.

With Feibelman’s now around the corner, the Pickwick Hotel building became Stein’s Department Store. So, after WWII, Gus Mayer wanted to open on Canal Street, but wasn’t interested in the time and expense involved in renovating the 800 Canal building. Gus Mayer purchased the property and demolished the building. Construction began in January, 1949. The Gus Mayer Building is still there. It’s a CVS Drugstore now.