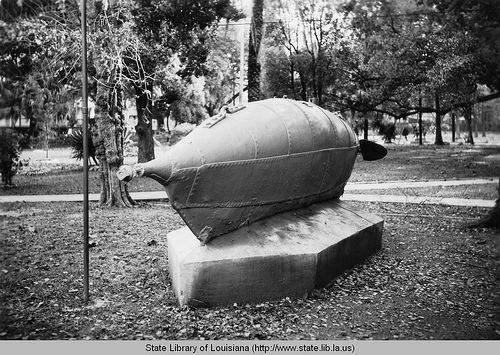 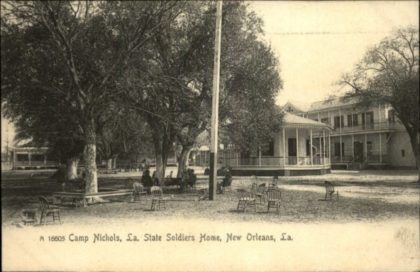 Camp Nicholls along the bayou

New Orleans has always been good to its native sons returning home from wars. After the Civil War, an “Old Soldiers Home” was founded as a refuge for veterans, located on Bayou St. John. That tract of land has had interesting and historical uses ever since as an escape for soldiers from both the Civil War and World War II and then as the property of the National Guard.

Since New Orleans was spared most of the ravages of war experienced by other cities, locals were able to look to the future of the post-war world. Caring and housing returning veterans was already on the minds of folks in 1866. The State of Louisiana appropriated funds to establish a home for these men. As Reconstruction politicians acquired control of state government, however, the continuing appropriation for the home was cut off. The home continued as a privately-funded institution, but struggled. 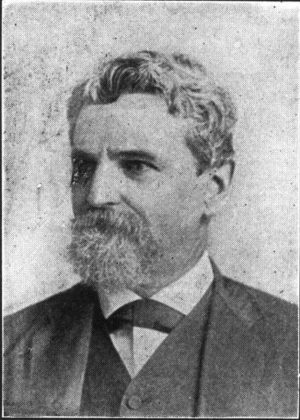 The cause of a Confederate Veterans Home grew by the 1880s. Veterans’ associations petitioned the state for financial assistance. The state re-enacted the original 1866 legislation. The project was funded. In 1883. The leader of the project’s board was Francis T. Nicholls. Nicholls served a term as governor, and was a lawyer in New Orleans. During the war, Nicholls was a CSA Brigadier. He lost his left foot at the Battle of Chancellorsville in 1863.

This board purchased a large lot, located on Bayou St. John. Joseph R. DeMahy sold the property DeMahy was, a former Lieutenant in the Confederate Navy. The board worked with several veterans associations, parish police juries and private citizens for money, They held fund raising events such as battle re-enactments on the property. They raised enough money to hire architect William A. Freret. Freret designed a complex of several buildings.

The home accepted its first inmate, James Adams, on February 5, 1884. Adams was a veteran of the 1st Louisiana Infantry. Dedication of the site as “Camp Nicholls” took place on March 14, 1884. Over 600 people attended that ceremony, including the daughters of CSA Generals Robert E. Lee, “Stonewall” Jackson, and D. H. Hill. Nicholls’ success in fund raising for the home became a model for other veterans’ associations in various states, and helped propel him back into the Governor’s office in 1888. 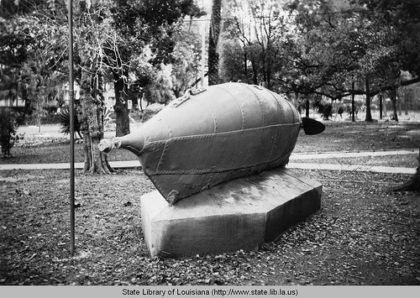 CSA “submarine” found in Lake Pontchartrain, after the war, at Camp Nicholls in the early 1900s

The Old Soldiers Home then became a fixture in Faubourg St. John. So, it received listing in tourist guides as a place to visit along the bayou. In 1909, construction workers discovered a prototype “submarine” in Lake Pontchartrain, by the mouth of Bayou St. John. They raised the wreck and cleaned it up. The salvage company donated the vessel to the Camp Nicholls. The home displayed the submarine for years. When Camp Nicholls was in decline, the home donated the boat to the Louisiana State Museum. LSM displayed it at the Presbytere in the French Quarter. It’s now on display at the Old State Capitol in Baton Rouge.

With so many of the Confederate veterans passing away, Camp Nicholls lost its original purpose. While the US Army ramped up for war in 1917, Camp Nicholls changed control. The complex housed the First Louisiana Infantry, the Washington Artillery, and the First Separate Troop Cavalry. After these units deployed to Europe, the home calmed down once again, housing just old veterans. 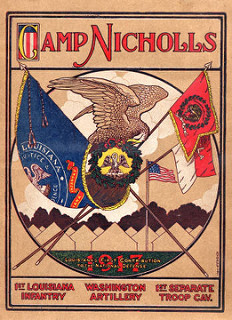 Cover of a pamphlet documenting the use of Camp Nicholls prior to WWI. (Photo courtesy of Tulane University Howard-Tilton Library)

The tradition of the “Lost Cause of the South” remained strong in New Orleans, and the former Confederacy as a whole, even going into the 1930s. In 1932, as part of an effort to preserve the oral histories of surviving Confederate veterans, the Times-Picayune newspaper arranged to gather a number of veterans together at Camp Nicholls and film them doing the infamous “Rebel Yell.” The group gathered along the bayou on February 11, 1932, and a number of veterans, clad in their Confederate uniforms, stepped up to a microphone and did the battle cry.

There were no living Confederate veterans at Camp Nicholls by 1940. The Old Soldiers Home formally closed. The Louisiana National Guard took over the complex. The Guard used Camp Nicholls as an armory and vehicle depot throughout World War II. The Guard turned the facility over to the City of New Orleans in the 1960s, who used it to house the NOPD’s Police Academy and 3rd District Headquarters until the 1990s. 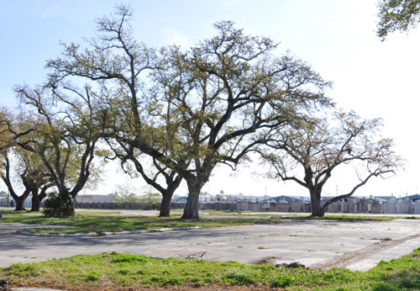 Camp Nicholls property, as it is today. (Photo courtesy of Mid City Messenger)

The complex sustained heavy damage in Hurricane Katrina. In 2009, after determining that the remaining buildings all dated from the 1950s, the city was granted permission to raze the site, and it’s been an empty lot since. Last year, Deutsches Haus, a non-profit organization whose mission is the preservation of German culture in New Orleans, leased the property. They plan to build the “new Deutsches Haus” along the bayou.

The Camp Nicholls property is fenced off and not accessible to visitors, but if you take the Canal Streetcar Line to City Park, you can cross over Bayou St. John and look through the fence. Maybe you’ll even feel the spirit of one of the “old soldiers,” as many have reported in the past.