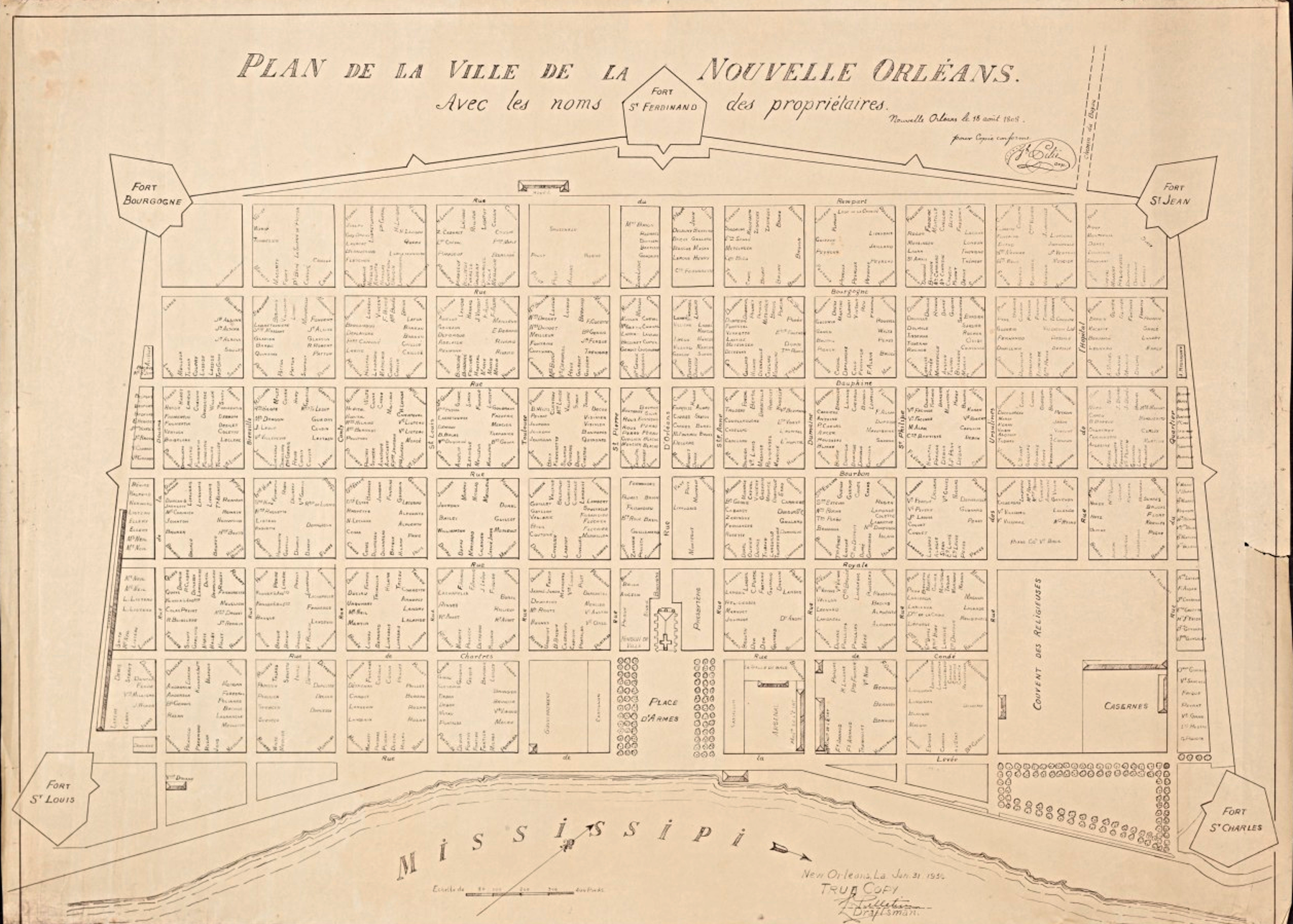 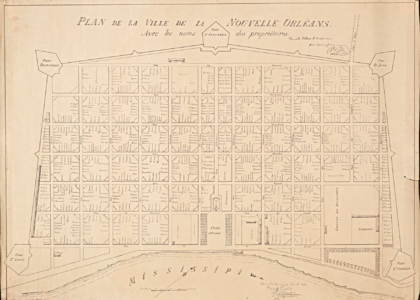 My Facebook friend Cathe Mizell-Nelson shared this fascinating map from The Historic New Orleans Collection. While there are several maps showing the streets of the French Quarter in the 18th/early 19th centuries, this one lists property owners. The cartographer is Gilbert Joseph Pilié. Here’s HNOC’s bio of Pilié:

Elected city surveyor of New Orleans 1818-1842. He surveyed New Orleans area lakes and helped establish forts between Bayou St. John and Mobile, Alabama. Gilbert Joseph Pilie began his New Orleans career as a teacher of drawing on Royal street, and as a scenic artist for the St. Philip Street Theatre and Olympic Circus. In 1818 he was elected city surveyor, a post he held until 1842. He was responsible for several memorials such as a triumphal arch honoring General Lafayette, and designed the riverfront vegetable markets. He was also involved in surveying the New Orleans area lakes and the establishment of forts between Bayou St. John and Mobile, Alabama.He married Therese Anne Deyant and had several children, including his son Louis Joseph, who succeeded him as city surveyor. DOB ca. 1789 DOD 1846-06-29

The breakdown of property owners is an awesome resource, putting families on specific blocks of the Quarter. This isn’t a hi-res image, so it fuzzes out. You’ll need to contact HNOC to dig deeper.

A significant feature of this map is what’s not there on the eastern edge. The City of New Orleans comes to halt at what is now Esplanade Avenue. The Marigny Plantation is to the right on this map. Bernard Mandeville de Marigny began subdividing the plantation at this time. So, what we now know as Faubourg Marigny isn’t of interest to Pilié.

The area around what we now call the “Old Ursuline Convent” is also interesting. The present-day convent/museum is at the corner of Ursulines and Chartres. The property runs down Chartres to St. Mary’s Italian Church. On this map, the convent property runs from Ursulines, all the way to Rue du Quartier, which is now Barracks street. Notice that Rue Hospital (now Governor Nicholls Street) doesn’t even go through the property. Since Pilié’s interest was identifying property owners, this block wasn’t of interest. The block between Governor Nicholls and Barracks was owned by the government, prior to the Louisiana Purchase. Just before the transfer of Louisiana to the Americans, the Spanish shifted ownership of this property to the church. The archdiocese owned that block well past the Civil War. 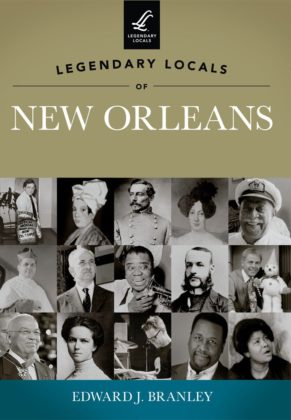 Since its founding in 1718 by the LeMoyne brothers, New Orleans has cemented its status as one of the busiest ports on the continent. Producing many unique and fascinating individuals, Colonial New Orleans was a true gumbo of personalities. The city lays claim to many nationalities, including Spaniards Baron Carondelet, Don Andres Almonester, and French sailors and privateers Jean Lafitte and Dominique Youx. Businessmen like Daniel Henry Holmes and Isidore Newman contributed to local flavor, as did musicians Buddy Bolden, Joe “King” Oliver, Louis Armstrong, and Louis Prima.