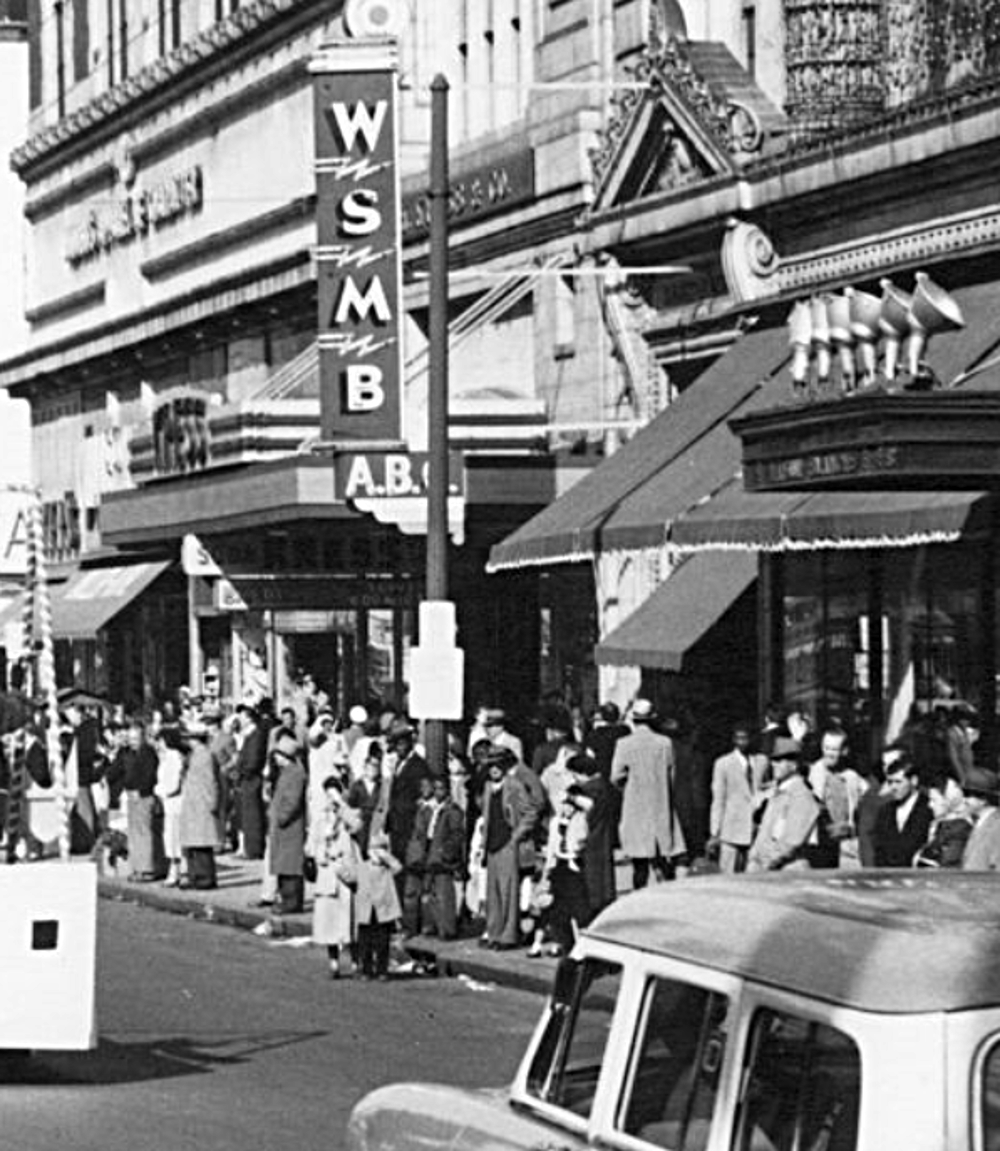 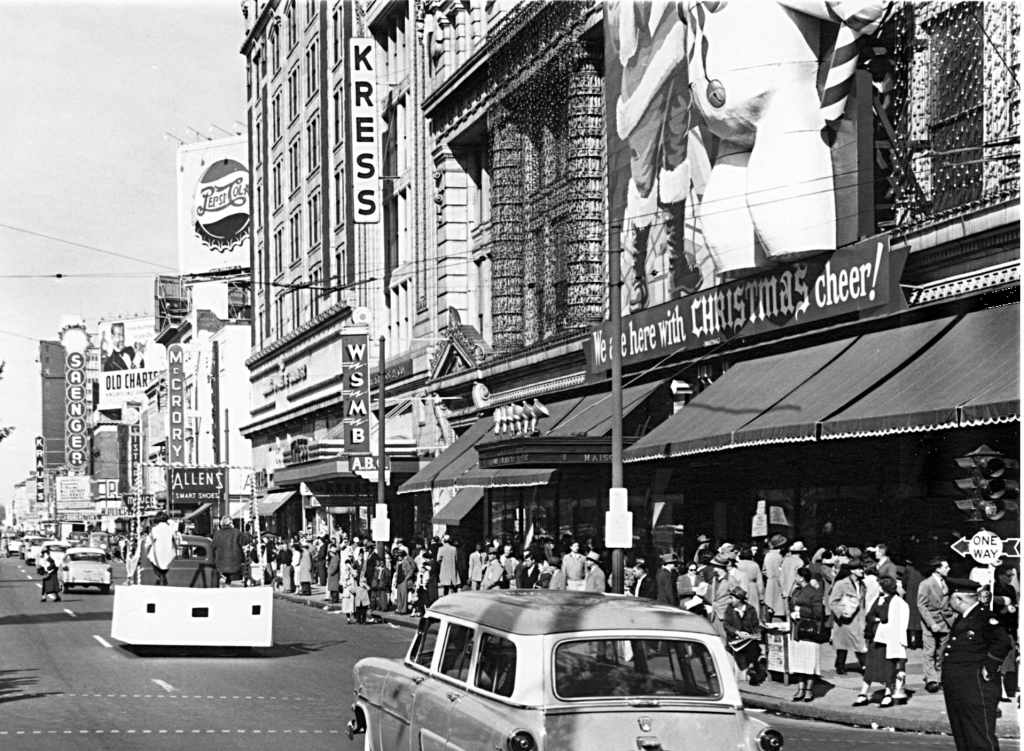 New-model Fords parade up Canal Street, Christmastime, 1953. We’ve had numerous versions of the Canal Street Christmas parade over the decades. Commercial parades such as this don’t happen like they used to, mainly because permit costs have risen dramatically. The modern non-Carnival parade in New Orleans is the “wedding second line” we see almost daily in the Spring and Fall. This is where a just-married couple stops their motorcade three or four blocks from their reception venue, then have a second line parade from there to the hotel/restaurant. It’s good fun and easy money for the bands, even if everyone else complains about stopped traffic in the Quarter.

Lots of interesting stuff going on in this photo. This is the first-generation “Big Bingle” on Maison Blanche’s flagship store. Mister Bingle is only six years old at this point. This is why he’s teamed up with Santa Claus. As Bingle got older, locals pushed Santa aside. For the first few years of Mr. Bingle (Emile Alline of MB created him in 1947), he was a drawing in advertisements. Then the Bingle puppets appeared. Oscar Isentrout pulled the strings on the puppet. 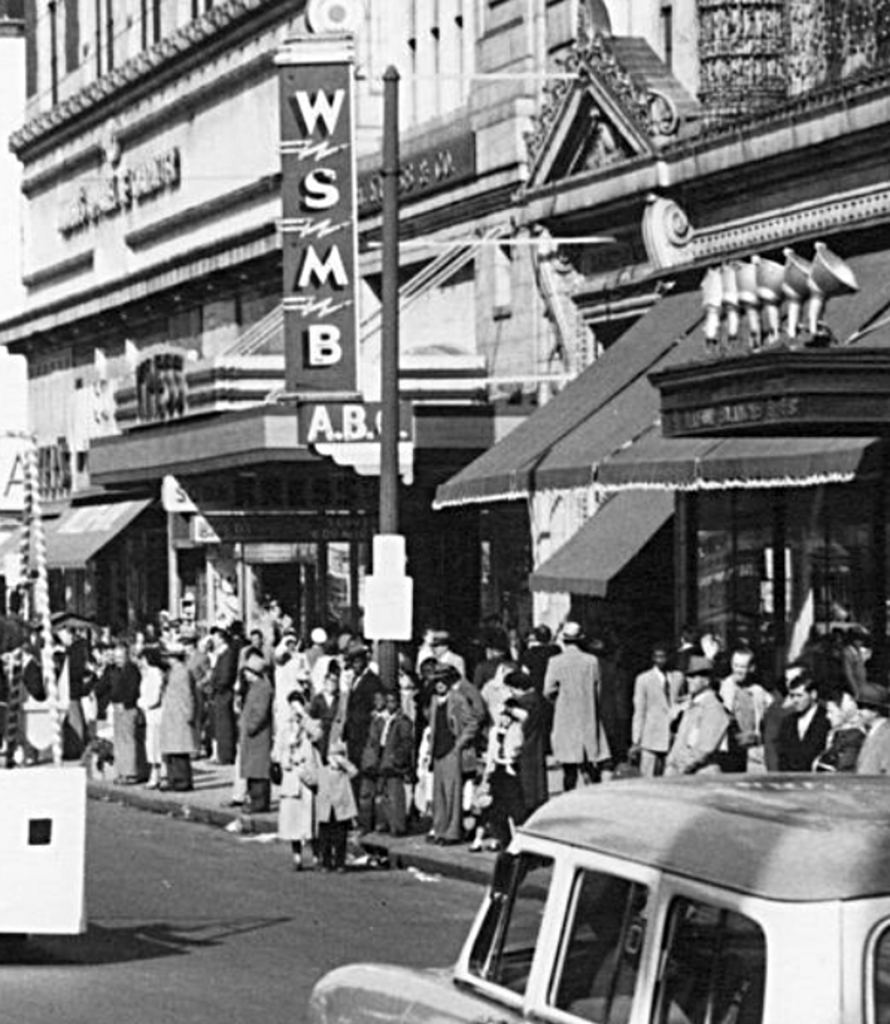 Another interesting item in this photo is the WSMB sign. I’ve got a bunch of MB photos, and this is the first time I’ve noticed this sign. My MB book includes a wide shot of Santa and Mr. Bingle from this time. The WSMB sign is right in front of the “Office Building” entrance. That entrance stood at the lake-side end of the building. It opened into a lobby with elevators that took folks up to the office floors above the five floors of retail space. The radio station was on the thirteenth floor. When the elevator doors opened, visitors looked into a big glass window, into the studio. This ground-floor entrance is the main entrance of the Ritz-Carlton Hotel.

I’m awful at identifying automobiles, so if you can spot the types of cars in the parade, please do in comments!

On October 30, 1897, S.J. Shwartz, Gus Schullhoefer, and Hartwig D. Newman with financial backing from banker Isidore Newman opened the Maison Blanche at the corner of Canal Street and Rue Dauphine in New Orleans. Converting Shwartz’s dry goods store into the city’s first department store, the trio created a retail brand whose name lasted over a century. In 1908, Shwartz tore his store down and built what was the city’s largest building 13 stories, with his Maison Blanche occupying the first five floors. The MB Building became, and still is, a New Orleans icon, and Maison Blanche was a retail leader in the city, attracting some of the best and brightest people in the business. One of those employees, display manager Emile Alline, created the store’s second icon, the Christmas character Mr. Bingle, in 1947. Mr. Bingle continues to spark the imagination of New Orleans children of all ages. Even though Maison Blanche has become part of New Orleans’s past, the landmark Canal Street store lives on as the Ritz-Carlton Hotel.