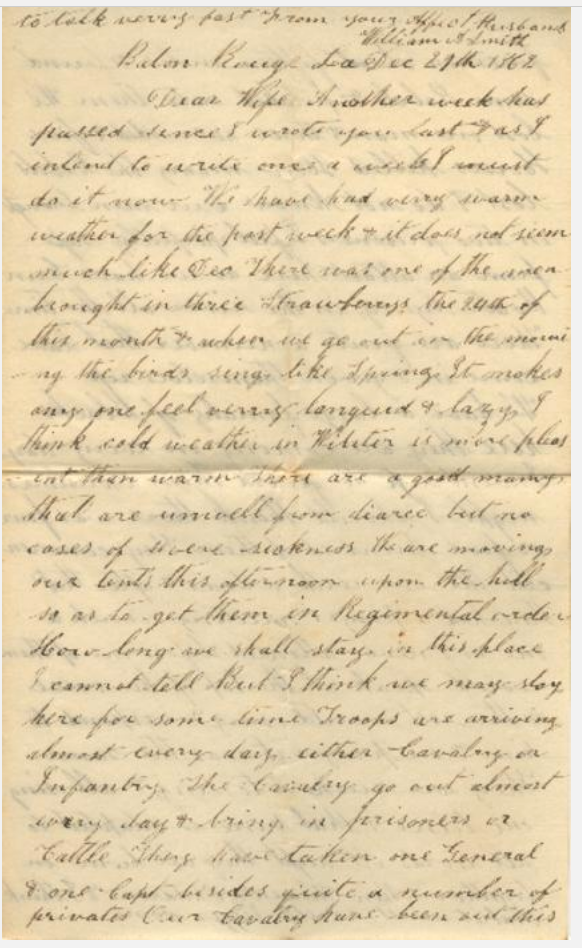 I’m sure most of you know that, in addition to my history books, I write fiction. I’ve written two YA novels and an Urban Fantasy story.

One of my longer-term fiction projects is a novel set in Civil War New Orleans. So, I regularly save primary sources from the period, to get a better feel for the period.

New Orleans during the Civil War fascinates me, because the city was taken out of the action/fighting early, in April, 1862. As the war raged, the city went back to being a busy port, albeit for the Union. While access to the city from the north was a challenge, waterborne commerce resumed when US Navy lifted its blockade. Therefore, goods and people came back to the city. Intrigue and excitement came with them!

From the North to Ship Island to Baton Rouge

Since I’m more interested in the “feel” of the time and the tactics of the regiments, I haven’t looked into the Smiths at all. He’s clearly in a Union regiment, since he talks about Ship Island. Ship Island, in Mississippi Sound, was the staging area for Butler’s troops. They moved up from the swamps near Forts Jackson and St. Phillip, then into New Orleans. Eight months later, this regiment fought in the area around Baton Rouge.

There are numerous stories and legends about Benjamin “Beast” Butler in New Orleans. Most of them are inaccurate, being part of the “Lost Cause” mythos. So many schools taught the Lost Cause as fact over the last 150 years, folks in the South have it backwards. While Butler is important to the story, I see him as the least interesting. Accounts like Smith’s letter here make far better stories. Since they’re part of the written record, as opposed to tall tales passed down, they’re more valid.

Source for this letter

This letter is available from the Howard-Tilton Memorial Library at Tulane University.