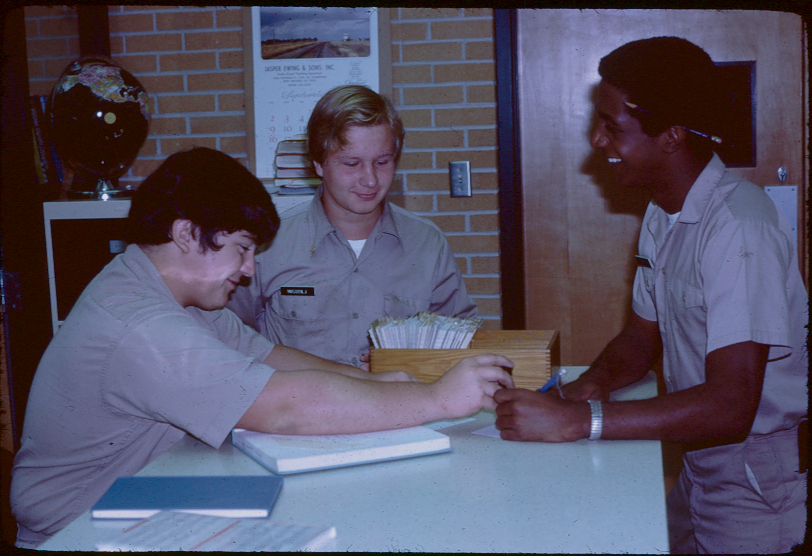 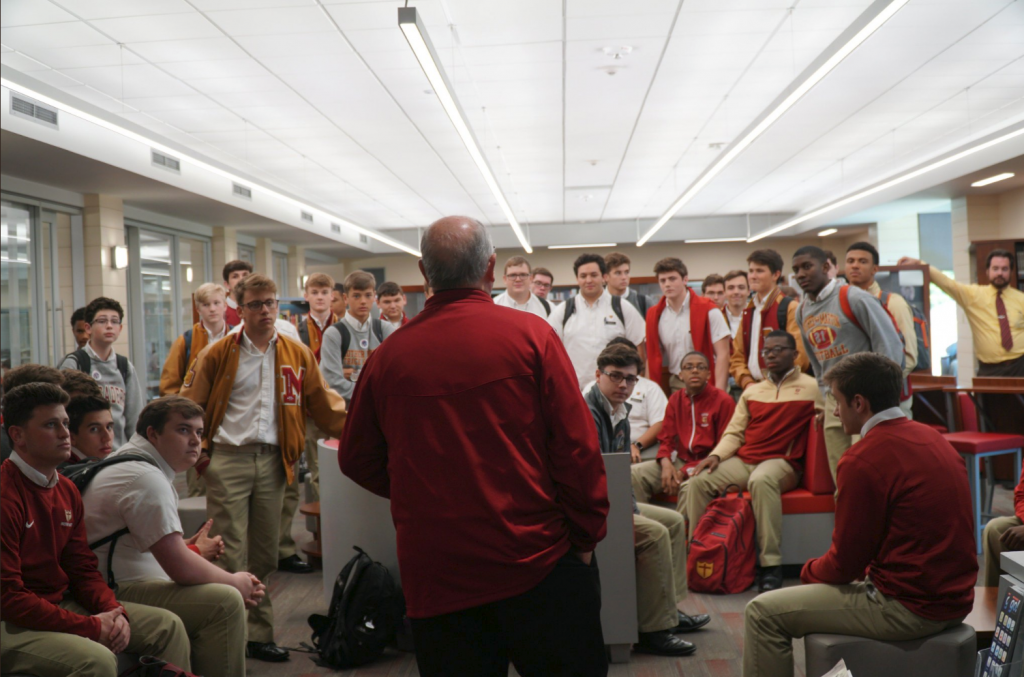 I stopped by Brother Martin on Monday, to bring Mrs. Aucoin, the Library’s Director, the photos from the BOSH book, so they can have more digitized “old stuff”. It was great to see the “new” library. 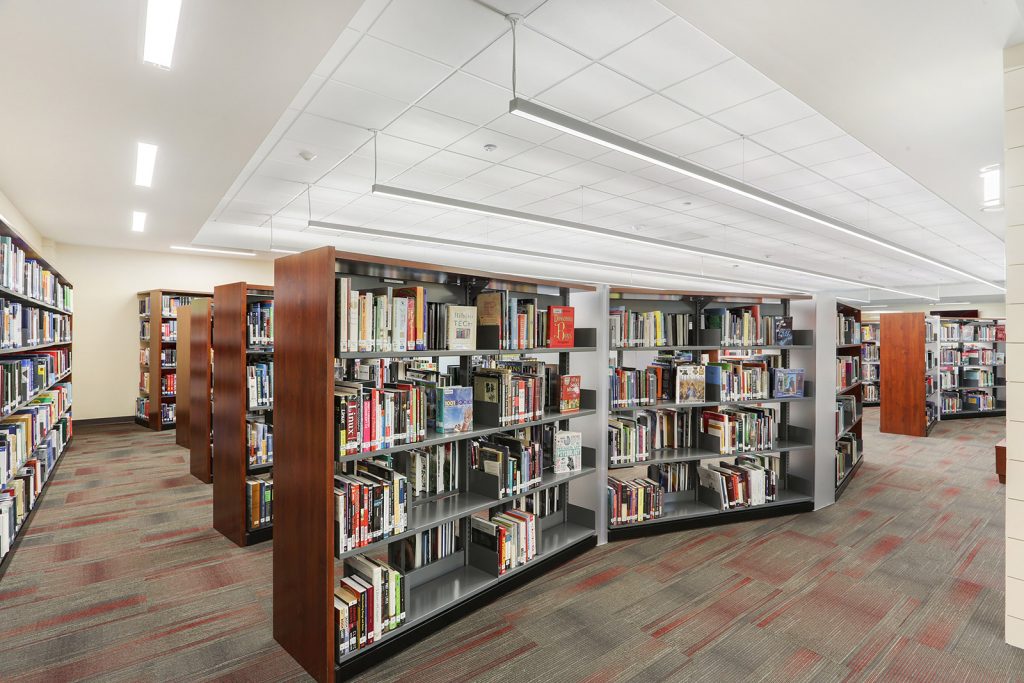 I went up the stairwell in the old building to get to the second floor. Back in the day, that stairwell put you out into the second floor Resource Center, or you could turn around and go back down the Cor Jesu building hallway. Now, the first thing you see when hitting the top of the stairs is the door to the new library. Mrs. Aucoin greeted me at the door, and we immediately came to the circulation desk, where I met Ms. Lauren Rhodes, her colleague. I got the tour, and waved to Mr. Craig Zeller (’02), who is a Computer Science teacher and moderator of the Academic Games team, among other things. Craig was giving an orientation talk to new faculty members, in the open space behind the circulation desk. 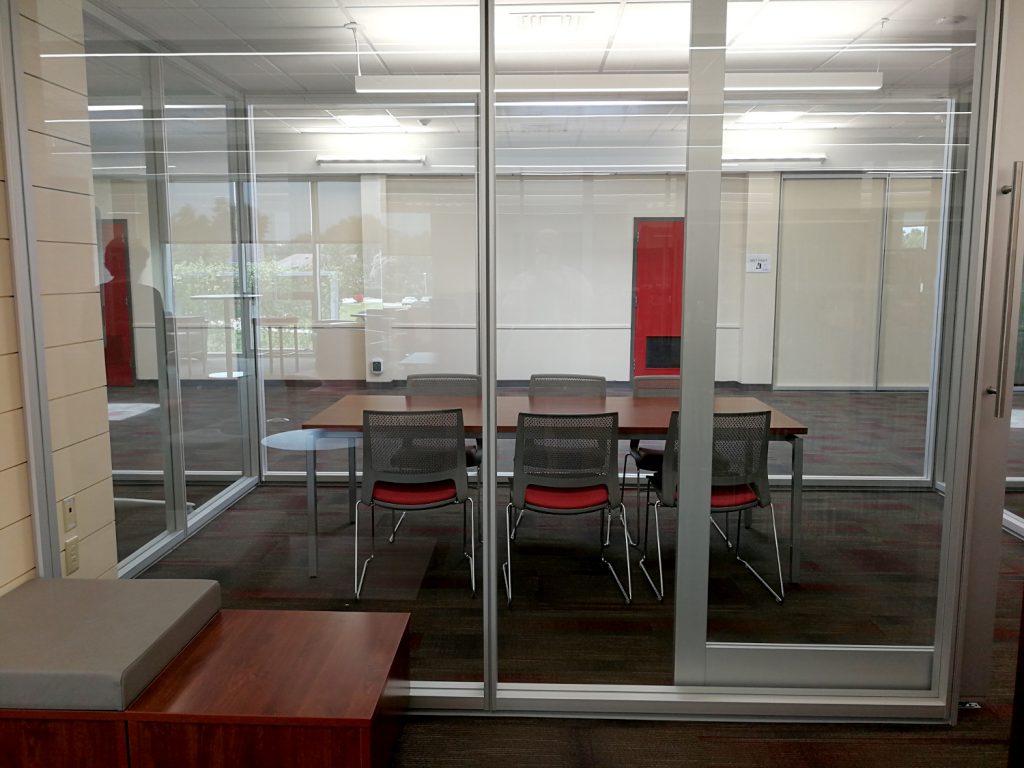 The space is very open, modular, and flexible. The teachers listening to Mr. Zeller sat at round tables, but then I noticed the tables pulled apart, so library patrons could work individually, or in smaller groups.

The wall connecting the library to the rest of the resource center is glass. The space includes several meeting/study rooms like the one above. Mrs. Aucoin, being the consummate professional, expressed concern about a minimal line of sight to the last meeting room down the hall. That attention to detail is why the school succeeds. 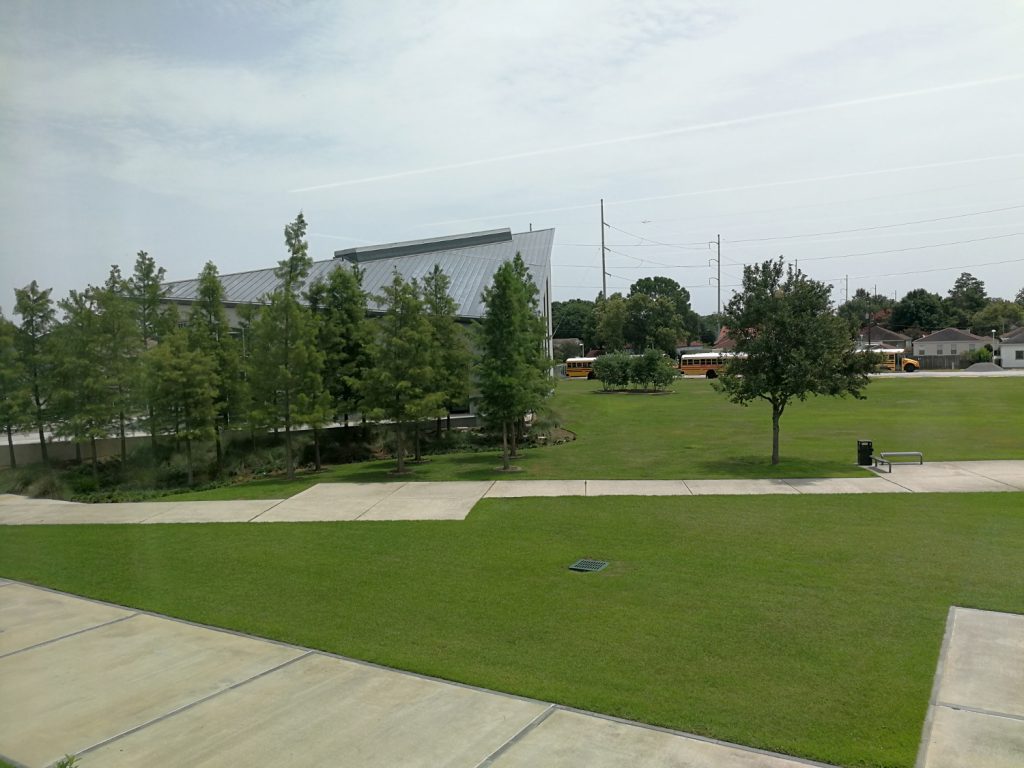 Looking out at the Branton Chapel from the “new” library. (Edward Branley photo)

The innovation that struck me most was the windows! In the mid-70s, the resource centers were A New Thing. The classrooms were carpeted and better-lit than the older, traditional classrooms in the 1950s-vintage Cor Jesu building. Frankly, that almost-brand-new environment was what won me over to BMHS, touring the school in the fall of 1970. St. Aloysius closed in 1969, so BMHS was almost brand-new. I was a seventh grader at the time, and it was so much newer than any other school we visited. The classrooms didn’t make good use of natural light, though. The view out to the back yard stunned me!

The new library is an excellent innovation!

Be sure to check out Edward’s book on BMHS, Cor Jesu, and St. Aloysius, Brothers of the Sacred Heart in New Orleans, on the sidebar.

Brothers of the Sacred Heart in New Orleans by Edward J. Branley

When New Orleanians ask Where did you go to school? they aren’t asking what university you attended but what high school. That tells a native a lot about you.