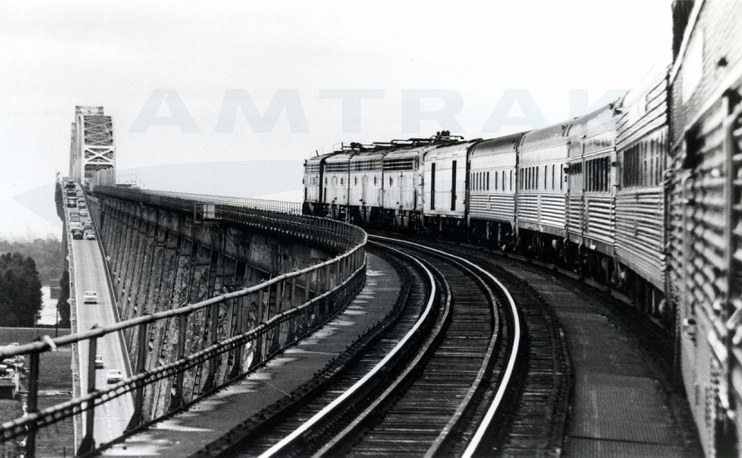 When Amtrak took over passenger rail service in the United States in 1971, they continued the Sunset Limited service. The Southern Pacific Railroad began the Sunset Limited in 1894. It was the second “transcontinental” railroad in the United States. The train traveled over Santa Fe and Southern Pacific track, from New Orleans to Los Angeles and back.

It’s possible for rail travelers to start in the east, as far north as Maine and travel to Los Angeles. While passengers commute through the Northeast Corridor, “long haul” travelers join them to Penn Station, in New York City. There, they board Amtrak’s Crescent (#19). The Crescent takes them to New Orleans. From there, they transfer to the Sunset Limited (#1).

The Sunset Limited in New Orleans.

The Sunset Limited originally used the Trans-Mississippi Terminal on Annunciation Street. This station was uptown, close to the Mississippi River. The train pulled out of the station, then traveled across the river on a railroad ferry. When the Huey P. Long Bridge opened in 1935, the Sunset Limited operated out of Union Station, on Howard Avenue. In 1954, the train shifted operations to Union Passenger Terminal.

The Pullman Company provided sleeper cars to many of the railroads running passenger trains. Therefore, travelers could board a Pullman sleeper coach in the east, and stay on it all the way to Los Angeles. The different railroads would pass the car along as service changed. So, Southern Railroad customers would travel from New York City to New Orleans on the Crescent. Southern Pacific picked up the sleeper, connecting it to the Sunset Limited.

This photo (courtesy Amtrak) shows the Sunset Limited, crossing the bridge  in the 1970s. When Amtrak started, the company used equipment given to them by the other railroads. So, this photo shows E-8 locomotives (A-B-B-A) from Southern Pacific. Budd “streamliner” cars make up the consist.

Currently, Amtrak uses a pair of P-42DC “Genesis” locomotives to pull a consist of Streamliner coaches up the Huey and out to Los Angeles.