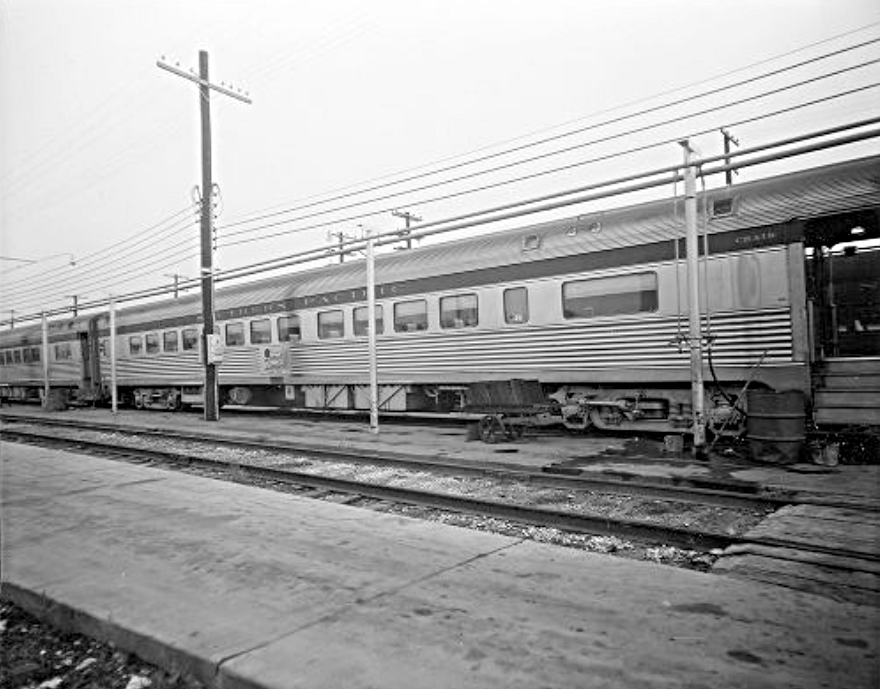 In 1970-1971, the last Sunset Limited trains operated by Southern Pacific, the consist was significantly scaled down. By the end of SP operation, both of the sleeper cars were discontinued, as well as the diner.

This fits with the photo. The coach is the last car of the consist, and closest to the terminal building. (Consist via Wikipedia.)

The locomotives used to power the train were Alco PAs and EMD F-7s, which bore the “bloody nose” livery that matched the “Daylight” trains.

The database entry for this photograph says it’s a Franck Studios photo, added to HNOC in 1979, but the photo is otherwise undated. This makes it an interesting to narrow down the date. We know that the streamliners began service in 1950. Union Passenger Terminal opened in 1950.

The Sunset Limited’s consist in the 1950s and 1960s included five Pullman sleeper cars. So, the train ended with three of those sleepers. While the 1970 consist included a sleeper, it wasn’t at the rear. So, the Southern Pacific tried hard to get out of the passenger rail business.

Amtrak inherited “heritage” equipment from the original operators in the 1970s. So, these cars ran in 1979. Amtrak re-painted all the cars with their red-white-blue livery. Therefore, it’s a good bet this photo is from 1970 or 1971.