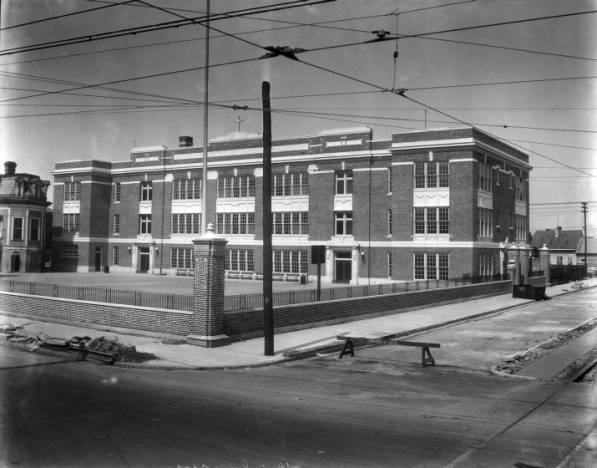 St. Aloysius College moved into their new home on Esplanade and North Rampart in 1925. The original building was a lovely mansion that was owned by the Ursuline Sisters. In 1892, the Ursulines decided to move their school uptown. The Brothers of the Sacred Heart were in a house on Barracks and Chartres at the time. The BOSH jumped on the Esplanade Avenue house, The Aloysius student body grew now that the Institute had some room to grow.

The corner of Esplanade and Rampart was an active transit location. The Canal and Esplanade Belt lines turned there. When the streetcars ran in “belt” service, they ran continuously in one direction. In this case, the Canal Street line ran out Canal, then turned right onto City Park Avenue at the Cemeteries. The streetcars went down City Park Avenue to the Bayou Bridge, then crossed Bayou St. John. They then went down Esplanade Avenue to N. Rampart. From Rampart, they turned right to go up to Canal Street. The streetcar turned left, went around Liberty Place, which turned them around do it all again.

The Esplanade line did the opposite run. From Canal and Rampart, Esplanade streetcars went down Rampart, then turned to go up Esplanade to the Bayou. From there, they went up City Park Avenue, turning left at Canal Street. They then went down Canal, to Liberty Place.

That’s why they were called “belt” lines. The St. Charles and Tulane lines are the more well-known belts in town, since they operated into the 1950s. Canal/Esplanade belt service was discontinued in 1931.

Streetcar ridership increased through the early 1920s. New Orleans Public Service, Incorporated (NOPSI) worked with the city to expand and improve the streetcar system. When it came to Esplanade and N. Rampart, NOPSI wanted to expand the neutral ground on Rampart. They sought city approval to widen the street. That required the city to acquire about a foot of right-of-way from the property owners.

The Institute were smart men. They didn’t voluntarily sell that foot of ground on the corner. The BOSH forced the city to use its “eminent domain” authority. They made the city pay to demolish the old mansion when buying the right-of-way. The Brothers then built the building most of us know as St. Aloysius College.

This is one of the earliest photos of the new building. Franck Studios took it for either the city or NOPSI. You can see the street work just completed on Rampart. The boys started the 1925-26 school year in their new home. By the 1960s, the rush to build caught up with the school. That’s the prologue to the story of Brother Martin High School, which began its 50th year, educating young men, this week. 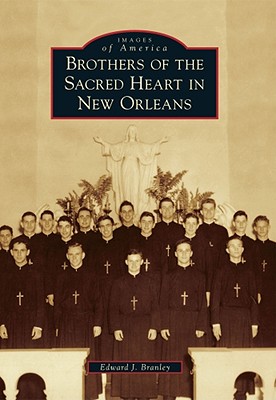