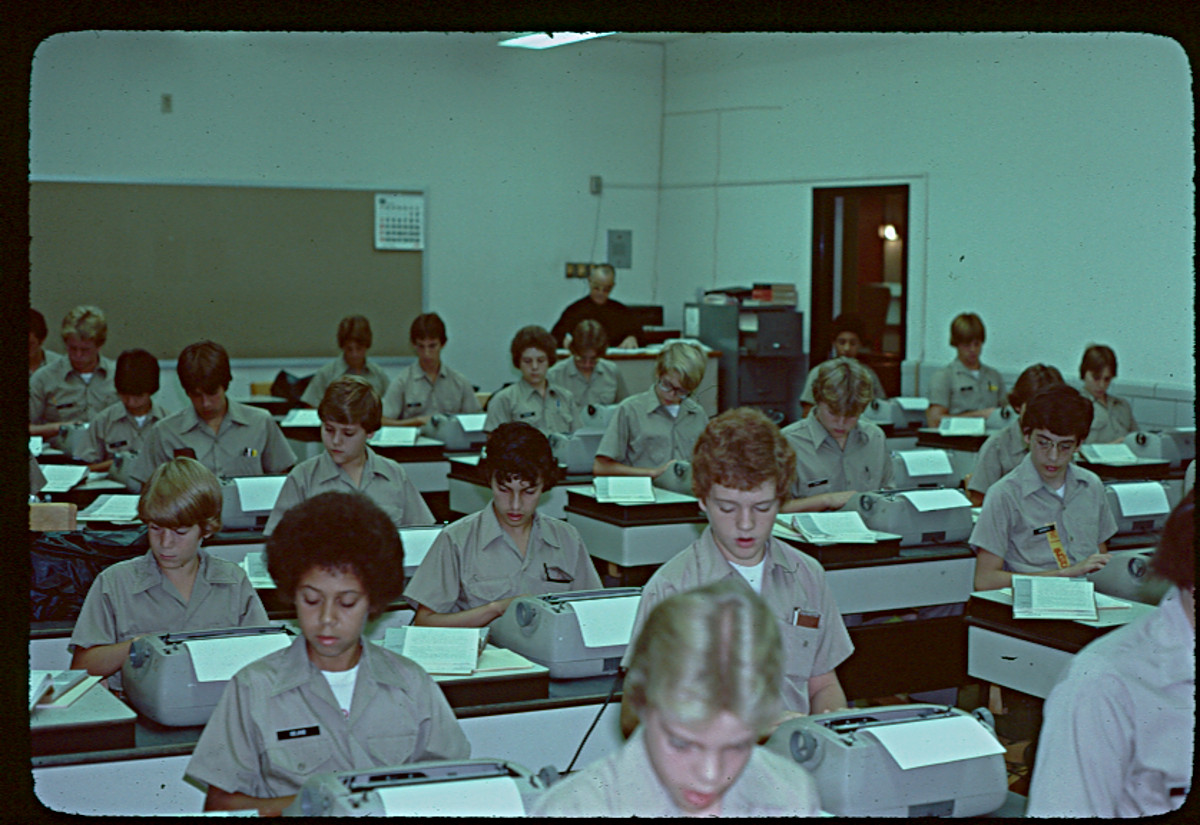 Buy the book, Brothers of the Sacred Heart in New Orleans 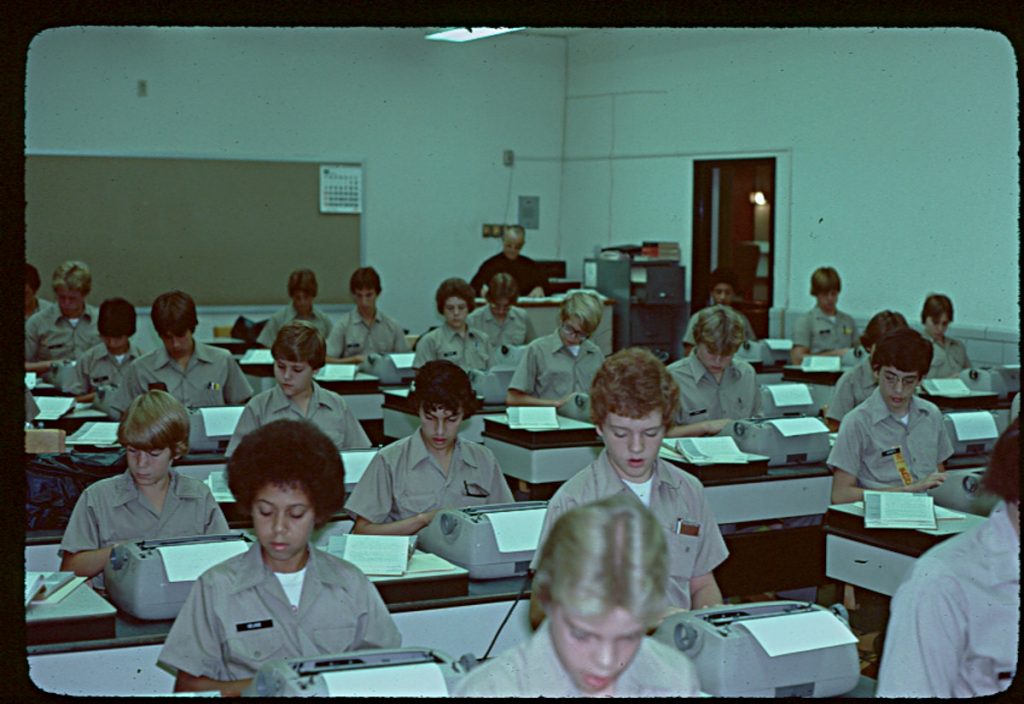 Brother Lloyd LeBlanc, SC, observes his students in Typing class 1979. The “typing room” you see here was located on the inside side (further away from Elysian Fields) of the old building. You could access this classroom from either the CJ side, or from the second floor resource center.

Rolling a sheet of paper into a typewriter, then tapping on the keys was still how documents were produced in 1979. Personal computer usage grew dramatically at this time. Still, when I submitted a paper to one of my professors at UNO in 1979, it was typewritten, on the little Smith-Corona we owned at home. I learned how to type in the room in this photo, in 1972-73. The scene wasn’t much different from the photo. 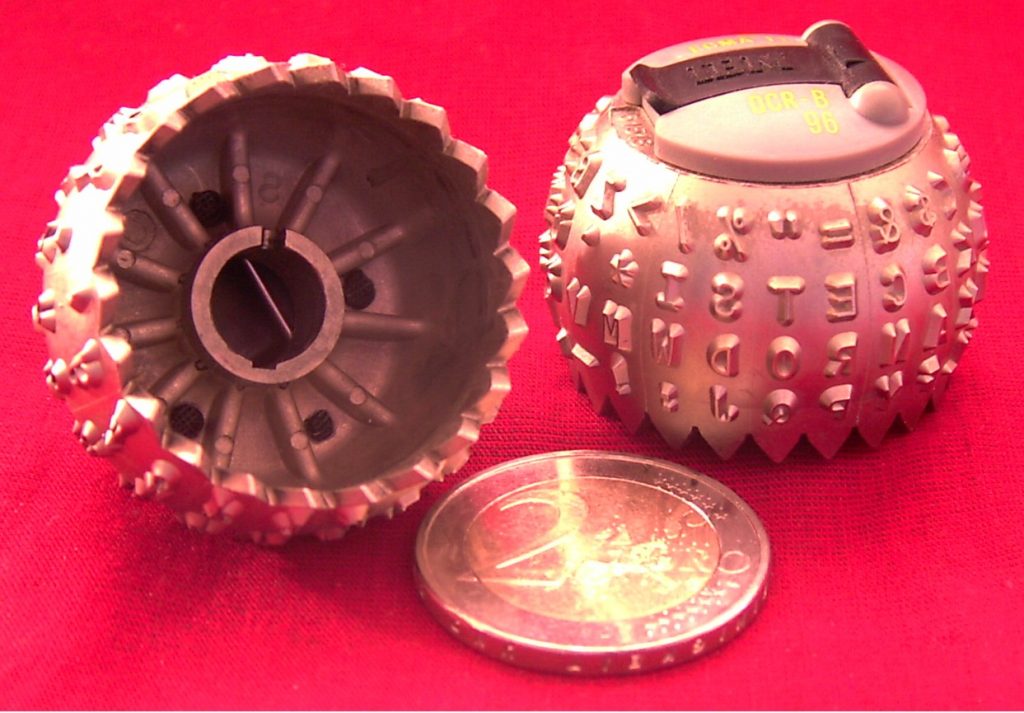 The element, the ball with the letters on it, was interchangeable. Well, not at Brother Martin, though, since we used just the basic element. Students typing chemical formulas, however, could switch out the basic element with one with, say, chemical symbols, or the Greek alphabet. IBM made a lot of money on this concept. The student of Russian history needed only one machine. She switched from one alphabet to another with ease.

Brother Martin freshmen failed to see the significance of this in the 1970s. That’s OK, we sorted it out quick enough in the real world.

Brother Lloyd LeBlanc, SC, was a wonderful man and teacher. He attended Loyola in the 1950s, with my mom. I’ve told the story before of how my mom knew many of the Brothers from teaching them at Loyola, or, like Brother Lloyd, as classmates there. Loyola is a Jesuit college, of course. She appreciated the skill of the Jesuits. While Brother Jean Sobert, SC, was the front man for the school in those days, men like Brother Lloyd projected a quiet impression.

The typing room’s volume setting was up there. Your typical classroom was a quiet place. All those typewriters hummed, whirred, and clacked. Brother Lloyd sat in the back of the room, supervising it all. He carried a stick, a pointer, one of those wooden ones with the rubber tip. On the first day of class he held up that pointer. Brother announced he never hit students with that pointer. It was a tool for correcting our posture. The first time the pointer poked me was a bit unnerving. Brother wanted me to adjust my hands as I typed. After the first experience, the pointer helped improve your typing.

Brother Lloyd adopted an all-business teaching style. You came in, sat down, and got to work. Outside of class, however, he lightened up. Talking to Brother Lloyd, between classes, passing by the typing room, or catching him downstairs occasionally, was fun. He lived in one of the houses around the corner from the school. Just a quick walk home meant he was around more than a teacher heading for the car after class.

Brother Lloyd led the Typing staff. Others taught the class, most notably, the Conlin Brothers, Bob and Dan. Coaches taught Typing, since it wasn’t an “academic” subject. The course material was laid out in the book and in the recordings used to keep rhythm. With more coaches than Physical Education classes, coaches needed class assignments. I never heard anything bad about either Conlin with respect to Typing. The noise level of the room made the usual distract-the-coach banter difficult.

As the 70s morphed into the 80s, those Selectric typewriters hit ten-plus years in the classroom. Brother Martin retired the typewriters. “Keyboarding” became the subject. The State of Louisiana required students take a class in basic computer skills. Typing simplified the transition. The spot in the freshman schedule changed names.