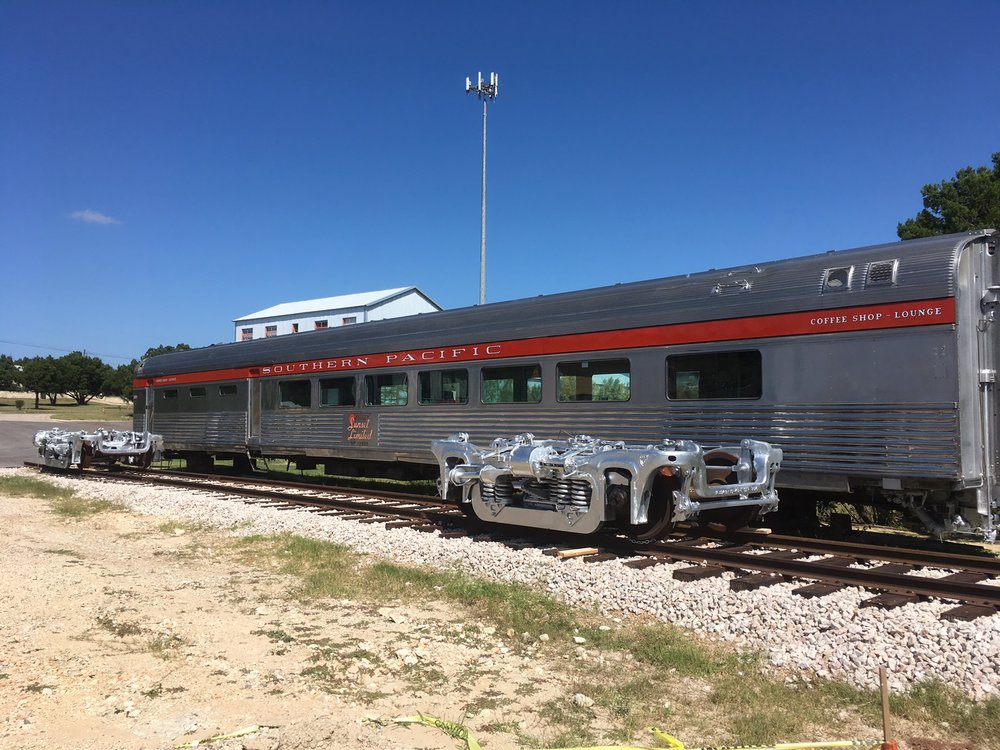 Sunset Limited dining across the West 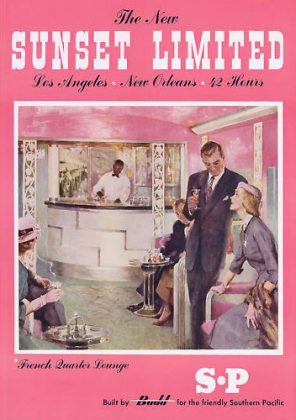 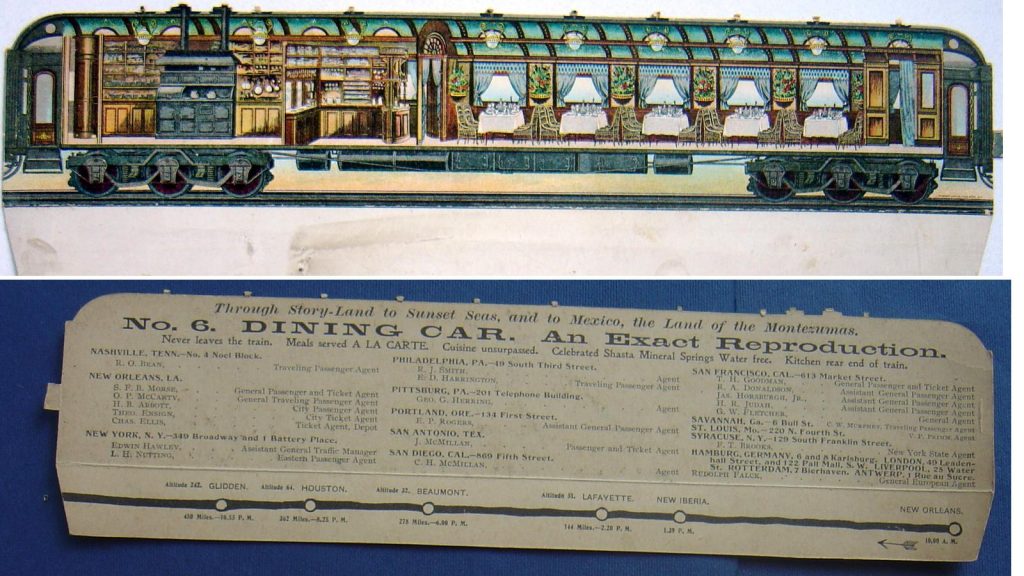 Traveling from New Orleans to Los Angeles on the Sunset Limited is a two-night affair. The Amtrak incarnation of the train departs New Orleans at 9am. The train stops in Houston in the afternoon. Passengers enjoy lunch near El Paso the next day. They then travel overnight through New Mexico and Arizona. The train terminates in Los Angeles in the early morning. 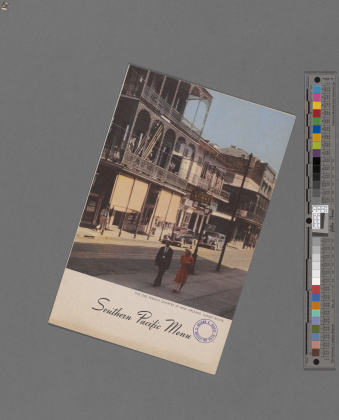 The Sunset Limited changed to “streamliner” service in 1950. Southern Pacific offered older, “heavyweight” service prior to 1950. The heavyweight train operated with steam locomotives. SP switched to diesels in 1949.

The heavyweight version of the Sunset Limited included a dining car and a lounge car. Passengers chose between full service meals, or a limited menu in the lounge. 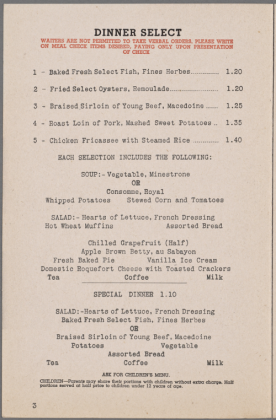 This 1946 menu has some New Orleans touches, like fried oysters remoulade. The menu requires diners to check their choices. This is likely because most of the stewards on trains in the 1940s were African-American men. The best way to avoid confusion and complaints from white customers was to limit their interaction with the stewards. Note that this doesn’t mean the stewards were unable to take an order. It’s more likely the railroad heard complaints from passengers looking to blame someone for their own issues. 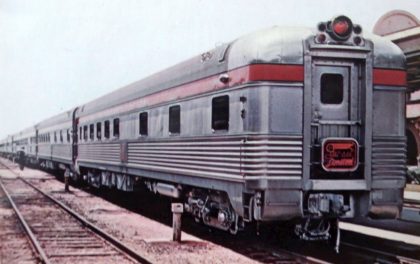 Sunset Limited dining changed radically with the debut of streamliner service in 1950. One of the trainsets featured two New Orleans-named cars, a diner, “Audubon Room” and a lounge, “French Quarter”. Both matched the streamliner livery, corrugated steel with a maroon stripe across the top of the cars. 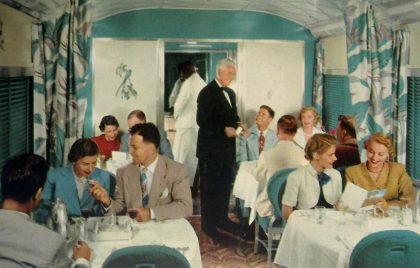 Fine dining continued on the streamlined Sunset Limited, in the Audubon Room. The blue tones of the brand-new Budd diner encouraged passengers to enjoy meals. The car also featured some of Audubon’s bird paintings. The menu in the new diner likely wasn’t much different from the 1946 version above. So, diners feasted on their oysters in a more modern setting. 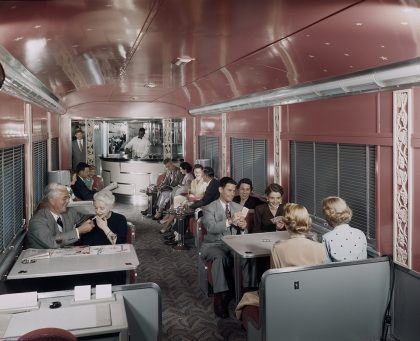 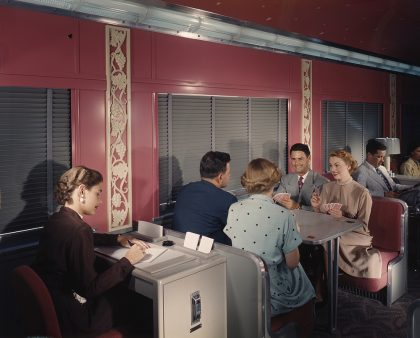 The lounge’s “wrought-iron” around the bar and along the walls gave the car the feel of a New Orleans club. 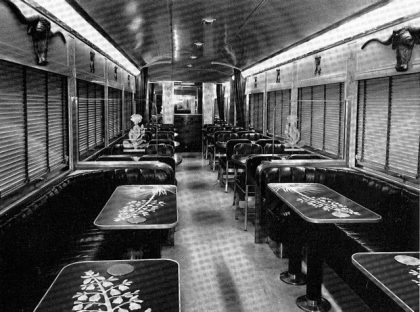 In addition to the restaurant and lounge, the Sunset Limited offered coffee and snack service. Sunset Limited dining meant several meals while crossing Texas. They named the coffee shop the Pride of Texas. The decor here focused on common Texas themes, such as the longhorn on the wall. 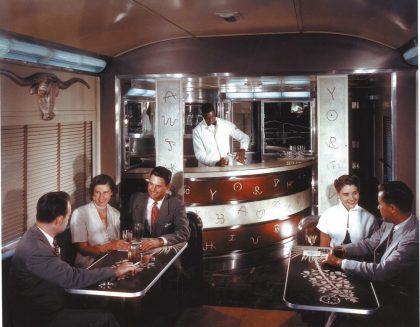 Southern Pacific ordered five streamliner trainsets from Budd for the Sunset Limited. It’s unclear if the railroad named all of the diners, lounges, and cafes the same, or if the other trainsets had different names. 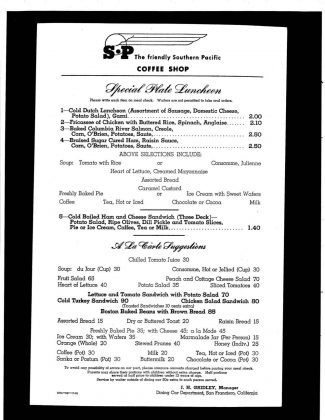 Passengers welcomed the chance to get up and walk around. The sleeper compartments offered as much comfort as possible. While they provided privacy, sometimes you need to get up and around. 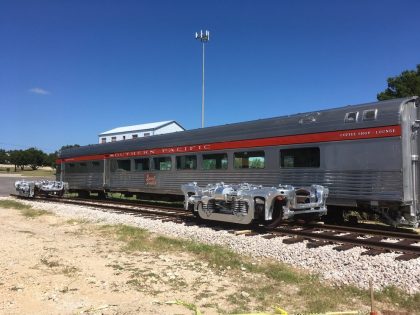 A real estate development project, Texas Compound, restored Pride of Texas. They display the car at their location. 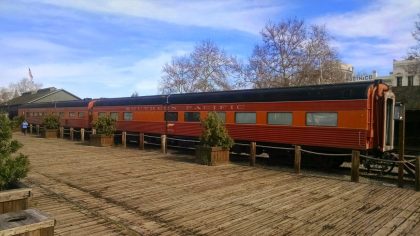 Southern Pacific transferred the Sunset Limited to Amtrak in 1971. The national company operated the “heritage” equipment on the route. They eventually switched to Superliner service. They sold the hertiage cars. Some became private varnish. Others became museum exhibits. SP retained French Quarter (Budd #2987, SP #291) as a business car. The railroad painted the car in Daylight livery. They donated the lounge car to the California State Railway Museum in 1998. The museum also acquired Audubon that same year. As of 2015, both cars operated in private service. It would be an interesting experience to ride in the original French Quarter, tagging along behind the current Sunset Limited! 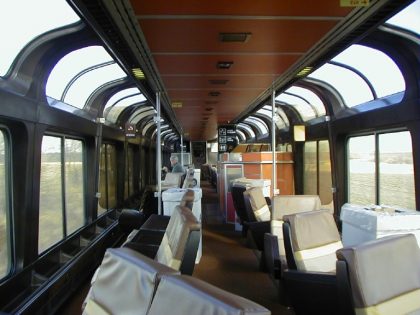 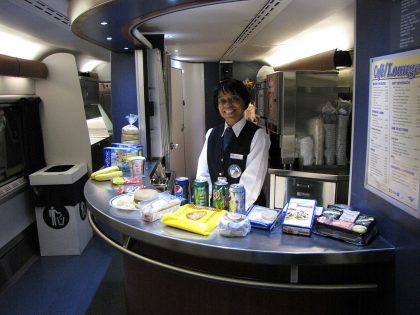 While the cars no longer have unique names, they offer quality service. 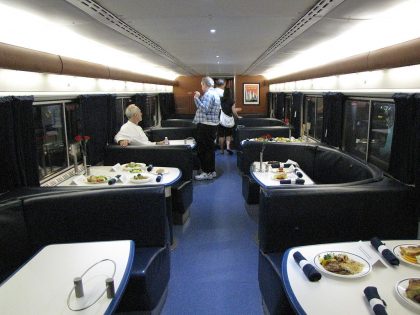 Passengers enjoy full meals in the dining cars and snacks in the lounge cars.