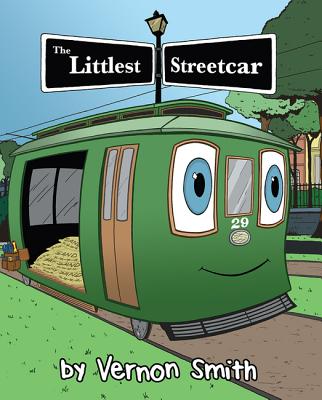 I had the privilege of attending a book event last Friday, at St. Francis Xavier Parish, on Metairie Road. There were over twenty authors there. I knew many of the authors. I also enjoyed meeting some new folks, like Mr. Vernon Smith. 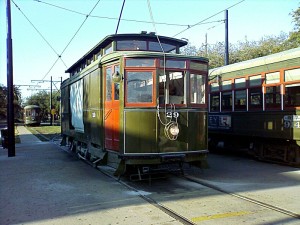 Vernon sat behind a poster-sized illustration of “the sand car”, also known as NORTA 29. The sand car is the last remaining Ford, Bacon, and Davis streetcar. The FB&Ds date back to 1894. Ford, Bacon and Davis were engineers. They won a contract to advise several streetcar operators in New Orleans. Electric streetcars rolled the streets, beginning in 1893. The transit companies used mule-drawn cars for decades. Electric streetcars meant they had to install overhead wires along their routes. The engineers offered consulting services.

After working on track plans, interchanges, etc., FB&D learned a lot about streetcars. They designed a streetcar for the New Orleans systems. Several companies liked the design. So, they ordered these streetcars in 1894. They first appeared on the St. Charles Avenue line. Then they rolled on Canal Street. From there, the companies put them on the backatown routes.

By the 1910s, the operators needed streetcars larger than the FB&Ds. They replaced the single-truck, smaller streetcars with double-truck cars from Brill and American Car Company. New Orleans Railway and Light Company ordered the first arch roof double-trucks in 1915. The 800- and 900-series arch roofs came to New Orleans in 1923.

The transit companies kept many of the FB&D streetcars for years. They ran well. Their smaller sized enabled them to run on routes with smaller ridership. The single-trucks were forty years old by the 1930s. NOPSI retired most of them. They kept a couple FB&Ds for special uses. NOPSI refitted #29 to drop sand on the rails on wet/icy days. NORTA 29 continues this job to this day. It is indeed the littlest streetcar in the NORTA fleet.