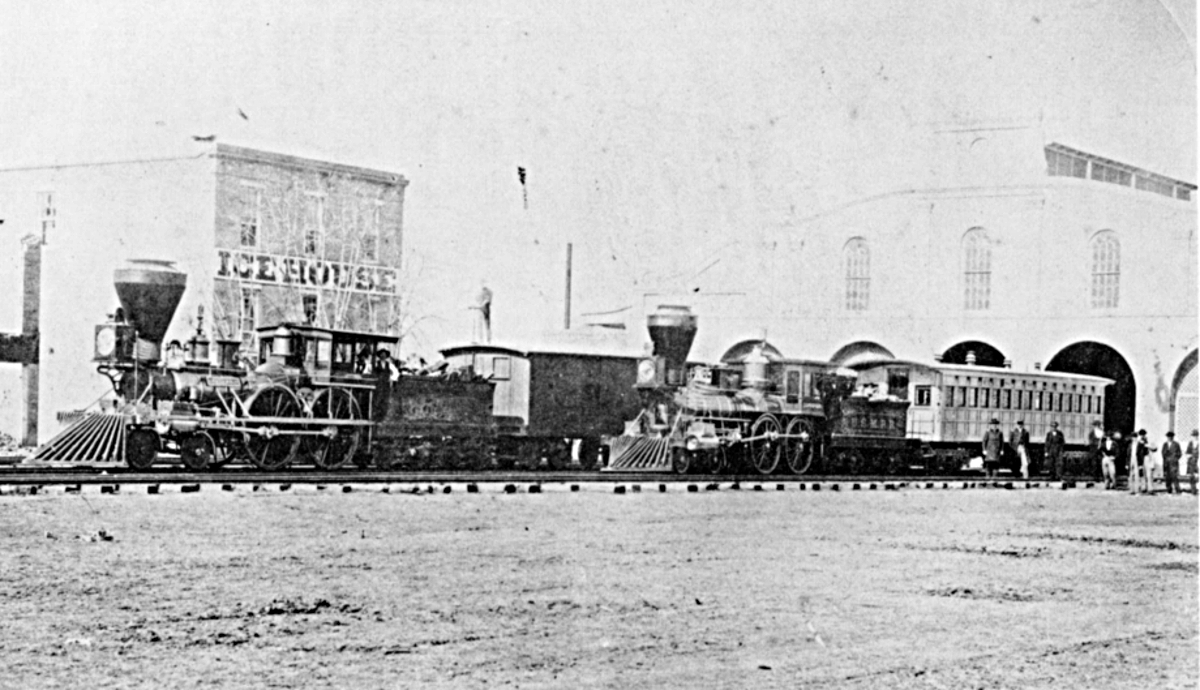 Algiers 1865, The railroads were a lifeline for the Union. 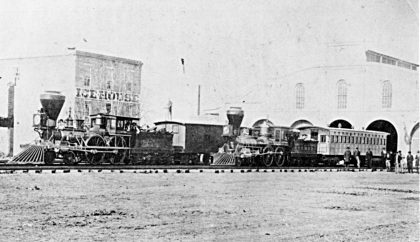 Trains at the Algiers Terminal of the New Orleans, Opelousas and Great Western Railroad, in 1865. The NOO&GW served the Union forces after the capture of New Orleans in 1862. 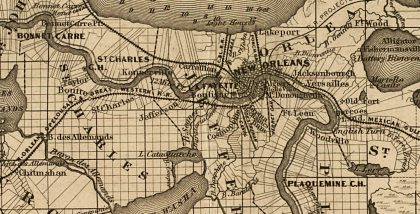 The railroad was chartered in 1852. Track construction began in Algiers. Track reached Morgan City in 1857. Morgan City was the western terminus for the company. NOO&GW used “Texas gauge” of 5’6″ until 1872, when Morgan converted the tracks to standard gauge.

Because it originated on the west bank of the Mississippi River, the railroad didn’t need ferries or bridges going west. Businesses using NOO&GW ferried their goods across the river to Algiers, then loaded them on trains. This made for an easy route west.

When Louisiana seceded from the Union, rebel leaders knew a blockade of the Gulf Coast was eminent. The state considered NOO&GW important as a land connection to Texas. The Union Navy captured New Orleans in late April, 1862. The Union Army moved immediately, taking control of NOO&GW in May, 1862. While rebel troops managed to re-capture some of the tracks near Morgan City in May, the Union troops regained complete control by November, 1862. From there to the end of the war, the railroad serviced the Union.

Benjamin Franklin Flanders founded NOO&GW. He sold the railroad to shipping magnate Charles Morgan in 1869. Morgan re-named the railroad, Morgan’s Louisiana and Texas Railroad and Steamship Company. He later sold the company to the Southern Pacific Railroad. The NOO&GW merged into the SP system, becoming part of its main line.

Southern Pacific expanded the original NOO&GW terminal in the 1890s. SP operated a large yard in Algiers, until the Huey P. Long Bridge opened in the 1930s. The railroad moved their yard to Avondale then, taking advantage of the new bridge. Even now, many Algiers residents refer to the area between Atlantic and Thayer streets as the “SP Yard.”