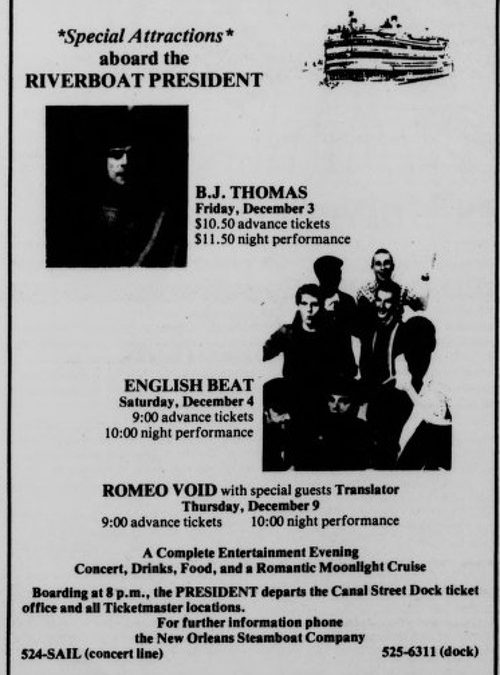 The last years of the Steamboat President in New Orleans 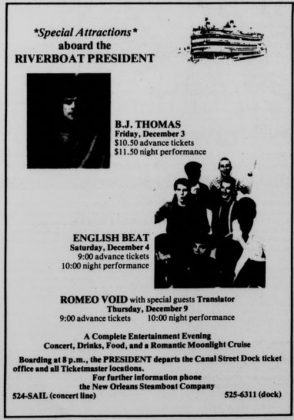 Ad for concerts on the Steamboat President in the Loyola Maroon, 3-December-1982.

Midland Barge Company built the President in 1924. The steamboat operated in overnight packet service, running from Cincinnati to Louisville. Streckfus Steamers acquired the steamboat in 1933. They renovated it and renamed it from Cincinnati to President. Streckfus originally operated the boat out of St. Louis. They moved President to New Orleans in 1941. World War II put constraints on purchase of fuel oil. Therefore, the company kept President close to home. They offered port tours and dance cruises. That business continued through the 1980s. The President left New Orleans in 1989.

The Steamboat President offered a mix of “dance” and “concert” cruises during its time in New Orleans. Touring bands and musical acts played the boat as they passed through town. When there were no headline acts in the area, the President featured local bands for floating dances. Ticket prices for these dance cruises were affordable, even for high school kids. A number of well-remembered local bands played the boat in their formative years. Occasionally, local “oldies” bands attracted older audiences to the President.

This ad from 1982 presents a lineup typical of the holiday season. With dozens of live-music venues, New Orleans attracted touring bands. Bands avoided the colder climes in the northern states by traveling I-10, from Florida to California. The Steamboat President offered a change of pace from the typical roadhouse venues these bands played.  B. J. Thomas, the English Beat, and Romeo Void all sat on the charts at one time or another. Thomas appealed to an older crowd. As a 24-year old in 1982, I can say with confidence, he wouldn’t be an artist I’d go out for a night on the boat.

The upside to an evening at a concert or dance on the President was that the evening was a cheap date. The biggest con was being trapped on the boat for the evening. One exercised caution who one went on the boat with. Blind dates on the President were risky. Double- and triple-dating provided safety in numbers, lest you end up stuck in a situation where you had nothing to talk about.

1989 marked the end of an era. The President was the last large riverboat used as a concert venue. While riverboats like the Natchez and Creole Queen offer dinner cruises, none of the current boats hold the same number of passengers.