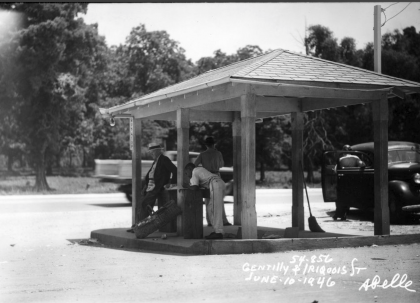 Bus stop at Gentilly Blvd. and Iroquois Street, 10-Jun-1946. This Franck Studios photo has a court docket number in the corner. I haven’t looked up why NOPSI lawyers hired their go-to photographers to shoot this location yet.

There wasn’t much in Gentilly, below Franklin Avenue, at this time. In May of 1946, the Southern Baptist Convention upgraded the New Orleans Bible College to a seminary. The increased interest in the school motivated the SBC. They moved the New Orleans Baptist Theological Seminary to its present location, directly across the street from this bus stop, in the 1950s.

The Broad line offered a lot of options to the rider. I used Broad to get from Brother Martin High School back to #themetrys in my high school years. 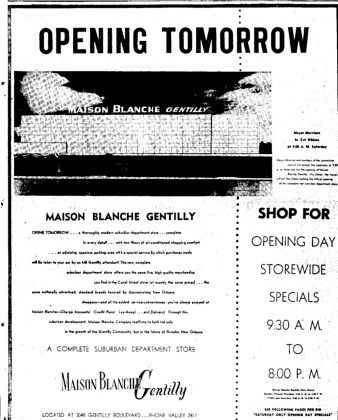 In 1946, Maison Blanche was still a year from opening their store in Gentilly. The store opened its second location, closer to Elysian Fields, in September, 1947. The store at Tulane and S. Carrollton Avenues followed a few months later. By the 1950s, the Gentilly Woods subdivision grew rapidly. Maison Blanche recognized this. They moved their Gentilly store, from Frenchmen and Gentilly Blvd., to just down the street from NOBTS. MB rode that boom, then moved on to the next boom, New Orleans east. They moved the store to The Plaza at Lake Forest mall in 1974.

Lots of photos of those stores in my book, “Maison Blanche Department Stores” – check it out!