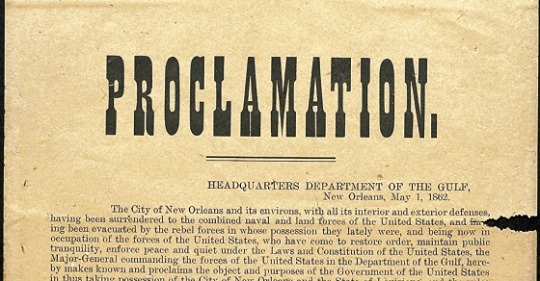 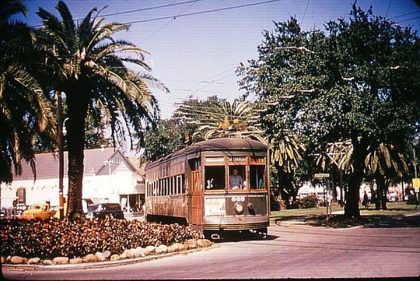 NOPSI 865, rounding the turn from S. Carrollton Avenue to St. Charles Avenue in 1960

Two segments this week. We talk about our pick of the week from Today in New Orleans History. Then we “unpack” a photo from 1960. 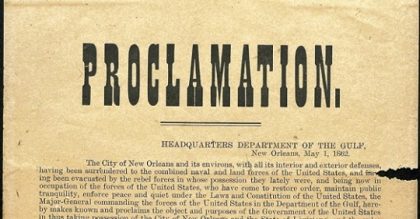 top of the broadside printing of Butler’s proclamation of martial law and occupation, 1-May-1862

While the United States Navy compelled the surrender of New Orleans on 25-May-1862, it was the Army that did the heavy lifting from there. Major General Benjamin Butler, USA, issued a proclamation on 1-May-1862, announcing that New Orleans was under the control of the federal government. He also declared martial law.

The rebels lost the war on the night of 24-25 April, 1862. While many people died and much was destroyed before the formal armistice, it was all over when New Orleans returned to Union control. Farragut forced the rebels to retreat north of the city. Butler came over from Ship Island with his invading force and moved in. Once martial law was established, most of the occupying force moved North as well, in pursuit of the rebels.

Butler was pretty much an awful person. He had a massive ego. To be fair, so did Farragut and Porter. All three commanders claimed credit for the victory in New Orleans. It’s hard to say who was the worst in this respect, but Butler received the most disparagement. The Lost Cause mythos plays out locally, portraying Butler as a venal man and petty thief. The “spoons” legend is an example. Butler and the USA had orderly procedures for occupying New Orleans. They confiscated gold and silver from residents. Butler didn’t pocket spoons, he sent his troops to loot entire houses!

May 1st is Inauguration Day in New Orleans. Two notable 1-May inaugurations were in 1978, when Ernest Nathan “Dutch” Morial officially became the city’s first African-American mayor. Last year, 2018, Latoya Cantrell became the city’s first woman mayor. It’s important to note that 1-May was set as inauguration day by the charter changes of 1954. As much as grumpy liberals who hate Mitch Landrieu want to slander him, he didn’t engineer a way to stay around through the city’s Tricentennial.

Our photo this week is of NOPSI 865, a vintage-1923 arch roof streetcar. This “Charley car” turns from S. Carrollton Avenue to St. Charles Avenue, on an inbound run. We unpack the photo in NOLA History Guy Podcast 4-May-2019.

I’m working on a long-form pod about Da Paper, now that it looks like John Georges is going to vaporize it. That will go up in 2-3 weeks. Working on preserving the memories of the “digital” years.