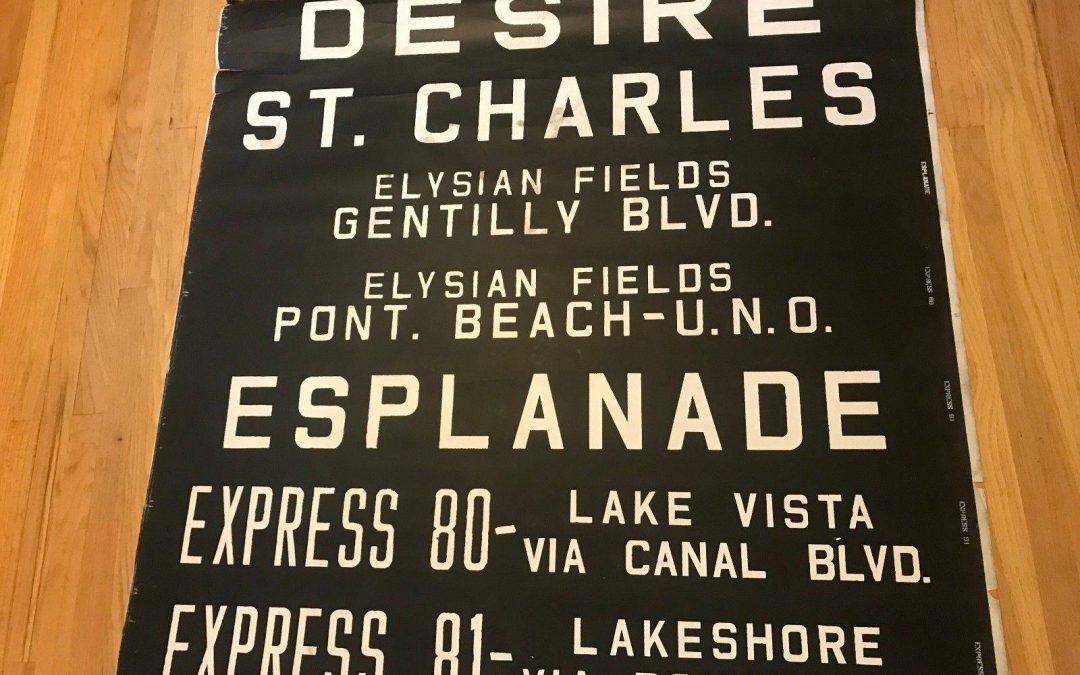 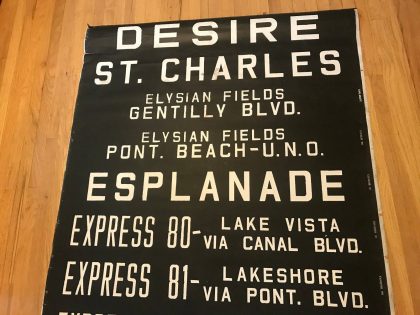 A different story today for #StreetCarMonday. Aaron Handy shared several “roll signs” from NOPSI buses to the Vintage New Orleans Transit group a while back. Through some Facebook strangeness, the images came across my phone, while reading another post in that group. I time-traveled immediately back to my peak bus-riding days, the mid-1970s.

The first (top) image shows a roll sign for several of the lines in the eastern part of town. They operated out of Canal Station I’m not sure why “ST. CHARLES” is there, since that line was (and still is) street rail. I rode the “Elysian Fields Pont. Beach – U.N.O.” line regularly. The other Elysian Fields line ended at Gentilly Blvd. Most of my rides covered Gentilly to the lake. On days when I wanted t go all the way downtown, I’d walk down to Gentily Blvd. and catch the first bus available. The UNO bus came from up the street. Te Gentilly Blvd. bus would be in the turnaround on the river side of the intersection. So, it was easy to see which line to take.

In the other direction, I rode the Elysian Fields line up to UNO, to hitch a ride with my dad. He worked at the university for over thirty years. I rode in from #themetrys with him. He dropped me off a Brother Martin, and then it was up to me how I got home. Some days, we’d hop the Elysian Fields bus, then jump off at Mirabeau, to catch the Cartier line. Other days, we’d go all the way up to Robert E. Lee Blvd., to stop at he comic book store, before catching the Lake line to Spanish Fort.

The Esplanade line opened in June, 1861. It ran mule-drawn “bobtail” streetcars, before electrification in the 1890s. Esplanade and Canal ran in “belt” service for a time in the early 20th Century. NOPSI discontinued that belt service in the 1930s. Esplanade converted to bus service. 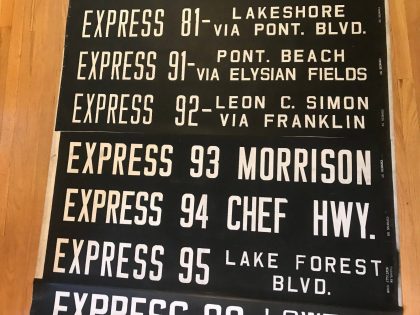 The lines with numbers operated in “express” service. For an extra nickel (when the regular fare was a quarter), riders bypassed a significant number of stops, on the way toward the end of the line. For example, the Canal express lines, 80 and 81, made no stops on Canal Street from City Park Avenue to Claiborne. Express 91 and 92 made no stops on their respective streets from Gentilly Blvd to St. Claude.

Express 80 and 81 occasionally fit into the going-home calculus. In addition to he NOPSI bus roll signs, expres buses used amber flashing lights. The rider saw the lights and knew whether to get aboard. We’d take the Cartier or Lake lines from Elysian Fields to Spanish Fort. Usually, the next leg was Canal – Lake Vista via Canal Blvd. If the only bus at Spanish Fort was express, you had to decide if it was worth the extra nickel. Most of the drivers did let us slide. They knew we planned to get off at Robert E. Lee and Canal Blvd., or at the Cemeteries.

Then the process repeated itself. At Canal Blvd., we transferred to Canal – Lakeshore via Pontchartrain Blvd. We rode that line to Veterans, by the old State Police station.

As time went on, NOPSI bus roll signs went digital, in the NORTA era. NORTA changed the route map dramatically in the wake of Hurricane Katrina. While these same trips require fewer transfers, there are fewer buses, too. It’s much more of a challenge.

If you like the content on NOLA History Guy, please consider being a $1 a month (or more) patron on Patreon.