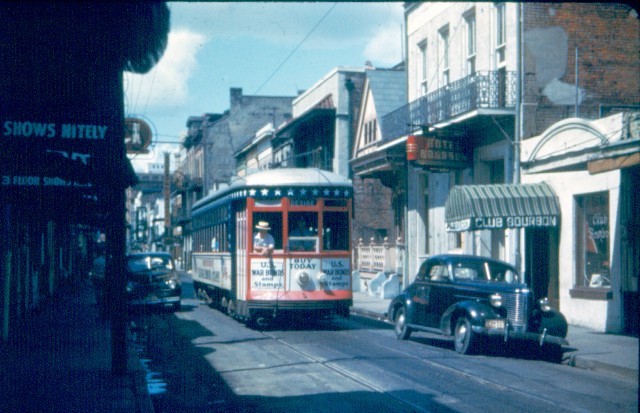 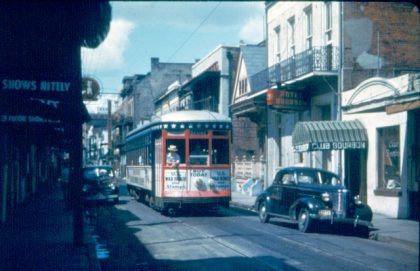 When America went to war in Europe, New Orleans stepped up and did her part to support the cause. In World War I, the retailers on Canal Street regularly used their advertising space to promote the sale of war bonds and war stamps. Those bonds and stamps paid for the war. Americans bought bonds. The government paid troops, and contractors with that money. After the war, the government paid bond holders back.

NOPSI patriotic support rose to a new level in 1942. The transit operator and utility company turned an entire streetcar into a war bonds ad. NOPSI 832 was an arch roof streetcar. NOPSI ordered the 800-series cars in 1923. The Perley A. Thomas Company of High Point, NC, built most of them. (Some were outsourced to other streetcar makers.) By the 1940s, the 800- and 900-series arch roofs replaced early streetcars running on the street rails of the city. While earlier streetcars sported colorful liveries, NOPSI standardized the look, using the familiar green we still see today. 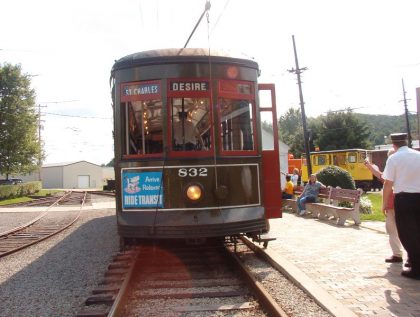 NOPSI discontinued use of the 800-series in 1964. The company converted the Canal Street line to bus service that year. They retained of the 900-series streetcars. While some of the 800s were sold/donated to museums, most were demolished.

NOPSI 832 was one of the lucky 800s. The Pennsylvania Trolley Museum acquired the car in 1964. The museum placed the car into service immediately, since their tracks are the same gauge as New Orleans. NOPSI 832 continues to delight visitors to the museum.

This week’s NOLA History Guy Podcast goes long-form! Listen to our conversation with S. Derby Gisclair about his book, Early Baseball in New Orleans: A History of 19th Century Play. Derby will be talking baseball and signing his books tomorrow night at Octavia Books at 6pm.