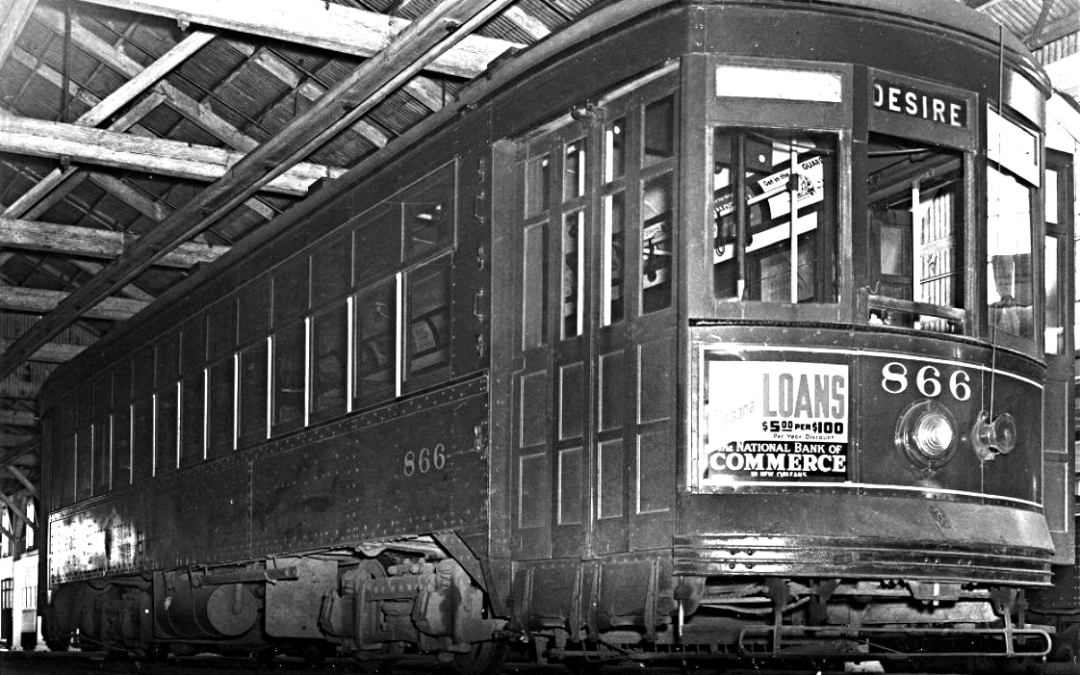 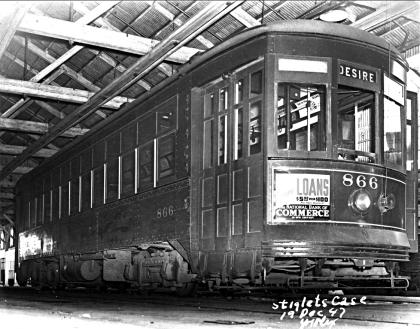 NOPSI 866, in the barn on 19-December, 1947. The note at the bottom says “Stiglets Case,” meaning Franck Studios shot the photo as part of a lawsuit. NOPSI lawyers used Franck Studios regularly to run out and shoot accident scenes. They also photographed streetcars involved in other types of lawsuits. NOPSI 866 appears undamaged. So, it’s possible the “Stiglets case” involved something like a slip-and-fall incident. Riders regularly filed legal claims against the transit operator. A lot of things happen on a moving public transit vehicle. Therefore, people claim damages. This continues under NORTA as well.

Streetcars running on Desire usually originated from Canal Station, rather than Arabella or Carrollton. Canal housed and maintained the streetars on the “downtown” and “downtown backatown” lines. Canal Station dated back to the creation of the New Orleans City Railroad Company, in 1861. That company operated most of the downtown-side lines. So, when the company merged into New Orleans Traction, the station remained in service. Canal Station serviced streetcars until 1964. NORTA demolished the original station. The A. Phillip Randolph bus facility replaced Canal Station. NORTA constructed a streetcar barn behind the bus station in 2004. The 400-series Riverfront and 2000-series Von Dullen streetcars operated from there. NORTA transferred the green arch roof streetcars to the Canal barn as well. So, Carrollton Station now maintains the streetcars, while Canal houses them.

This streetcar ran on all of the lines in the city, from 1923 to 1964. NOPSI converted the Desire line to buses in 1947. They transferred the streetcars to the Canal and St. Charles lines. The “roll boards” (the signs indicating which line the streetcar was running on) still had all the old line names. Both streetcars and buses used roll signs. In the 1950s, tourists would ask the motormen on the remaining lines to change the roll board to Desire. The riders photographed themselves with the “Streetcar Named Desire.”

NOPSI demolished all of the 800-series arch roofs in 1964. They converted Canal to bus service. Only a couple of 800s remain today.