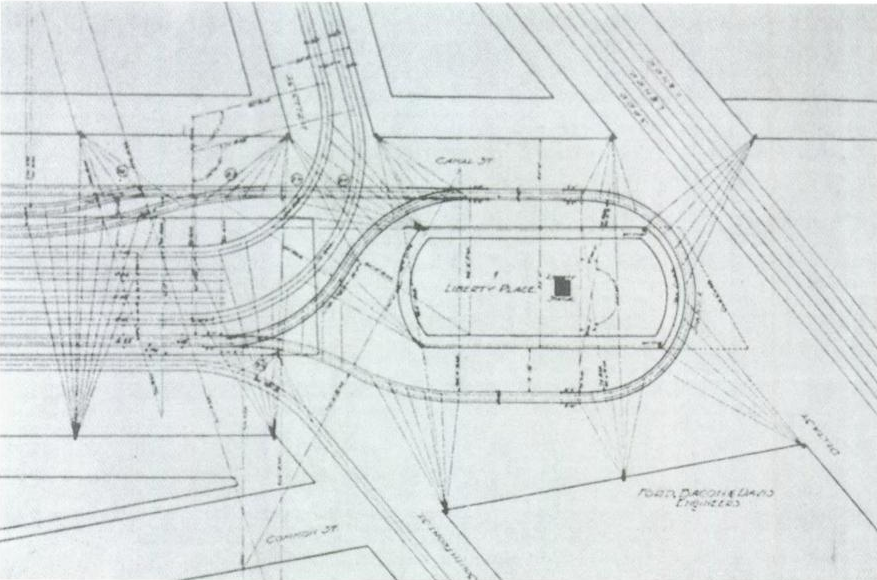 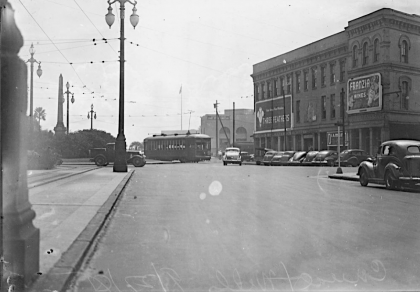 A NOPSI arch-roof streetcar makes the turn around Liberty Place. This charming photo from 1941 shows one of our classic “green” streetcars circling around the Liberty Monument. After completing the circle, the motorman parked the car in the four-track terminal. He and the conductor took their break, then proceeded on their outbound run.

The obelisk known as the “Liberty Monument” stood at Canal and Front Streets in a small, oval-shaped green space. The New Orleans Traction Company contracted the engineering firm Ford, Bacon, and Davis (FBD), to evaluate the street rail system in New Orleans in 1893. They made a number of recommendations, including a re-design of the streetcar tracks at the foot of Canal Street. 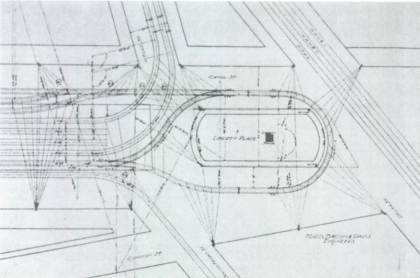 Plan of the Canal Terminal designed by Ford, Bacon, and Davis, published by Street Railway Journal, 1905

The city completed construction of FBD’s Canal Terminal design in 1900. By this time, all the mule-drawn tracks were removed from service. While the city cut back the  massive base of the Clay Monument at Royal and Canal, they left Liberty Place alone.  They cut down Clay to allow the tracks to run straight. FBD designed a loop around Liberty Place. Streetcars traveled down the Uptown side of Canal Street. When they reached Liberty Place, they looped around and parked on the French Quarter side. The 1900 version of the terminal included the loop and eight tracks. In 1930, the city implemented a “beautification” program that cut back the number of tracks to four. That 1930 street program also included installation of our fleur-de-lis street lamps, also visible in this photo.

Canal and the river

The buildings on the right display advertisements for liquor and wine. “Three Feathers” was a popular blend of Scotch. So, the name refers to one of the heraldic badges for the Prince of Wales. The badge includes a plume of three ostrich feathers and the royal coronet of the prince.

The second sign visible on the right is for Franzia Wines. Franzia still has a warm spot in the hearts of New Orleanians. Supermarkets sell Franzia as a “box wine.” Box wines are popular for Carnival parades, picnics under the interstate, or out at the lakefront.

The building background right is the Port of New Orleans office building, at Eads Plaza. Those buildings were demolished to make way for the International Trade Mart building and Spanish Plaza.

From the time of the Liberty Place loop’s construction to its removal in 1964, many routes used it to change directions. For example, the Canal Street/Esplanade Avenue “belt” service arrived on Canal Street at N. Rampart Street. The streetcars turned toward the river. They looped around Liberty Place, parked at Canal Terminal then headed outbound. Other lines, such as Gentilly and Desire, used the loop to change direction.

When NOPSI discontinued the Canal line in 1964, they city demolished Liberty Place. So, they placed the monument in storage. Therefore that began its tumultuous history as a civil rights flashpoint. When Canal Street service returned, NORTA constructed the current three-track terminal that exists today. NORTA connected the tracks for the Riverfront line to that terminal. Streetcars now run from the Cemeteries and City Park all the way to the French Market terminal.