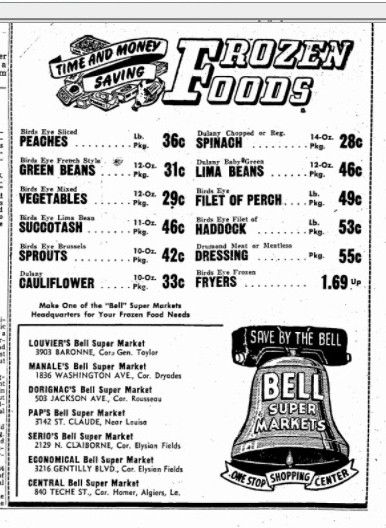 Economical Supermarket, on Elysian Fields and Gentilly, in the 1950s. (Zuppardo’s photo)

I’ve been going to Zuppardo’s  Supermarket, either the old store on Elysian Fields and Gentilly, or the Metairie store at Veterans and Transcontinental, since I was a kid. That’s going back to the days when the Gentilly neighborhood had an incredible number of groceries and supermarkets.

Peter Zuppardo came to New Orleans from Sicily in 1895. He took a job in the wholesale banana business. His son, Anthony Leo, saw an opportunity with over-ripe bananas. Anthony took those bananas around in a donkey cart. By 1930, the Zuppardo’s parked a truck at Gentilly Road at Elysian Fields. At that time, Elysian Fields Avenue was just a dirt road. The Pontchartrain Railroad closed in 1931, and Elysian Fields wasn’t paved until the end of the decade.

The Zuppardo’s bought the lot on that corner, establishing a permanent presence. The fruit truck expanded into a store in 1937. Those were the waning days of the city’s public market system. That system gave way to private stores after the war. The family made a good decision, as the neighborhood grew. After World War II, Gentilly’s population exploded, as men returning from the war looked to start their own families.Those strong ties helped Zuppardo’s Family Supermarket in later years, in their expansion to Metairie.

Economical became part of the Bell supermarket co-op. The idea was for independent grocers to join together to better advertise their stores. This was important, because John Schwegmann’s “giant” supermarkets became incredibly popular in the 1950s. Stores such as Economical, Dorignac’s uptown, and Pap’s in the Ninth Ward all sported the Bell logo.

Economical continued its popularity into the 1960s. That was my first personal experience with the store. My momma grew up in Gentilly, on Lavender Street, just off of Franklin Avenue. She and her grandmother made groceries at Economical. Even though my parents moved out to #themetrys when they came back from Boston in 1960, we’d still go out to see my grandma regularly, and I’d tag along for grocery runs.

Aerial view of Elysian Fields and Gentilly, 1961. Hebrew Rest Cemetery is middle-left. Cor Jesu High is across from the cemetery. Economical Supermarket is to the right edge, below Gentilly Blvd. (NOPL photo)

The Bell supermarkets expanded and re-located as population shifted. The Papania’s opened a “Pap’s” store on Mirabeau and St. Anthony in Gentilly. Dorignac’s and Zuppardo’s opened stores on Veterans Blvd. in Metairie. Dorignac’s built a store in the 700 block of Vets, near Martin Behrman, while the Zuppardo’s opened their Metairie location at Vets and Transcontinental. My family lived closer to Dorignac’s and Schwegmann’s in the late 1960s, so we shopped there.

I renewed my acquaintance with Economical when started at Brother Martin High School, just up Elysian Fields from the supermarket, in 1971. While we mostly stopped at the local convenience store, d’Mart, we occasionally walked down to Economical for things, particularly when d’Mart employees got annoyed with all of the students coming in. I met one of the current owners, Joey Zuppardo at that time. Joey was Class of 1973, I was 1976, so he was a senior when I was a freshman. (For a full run-down of the Zuppardo family tree, check this 2018 Ann Maloney article on the new supermarket in the Picayune.)

I took many a trip down to Economical with my Lambda Chi Alpha brothers from our house on Elysian Fields near Robert E. Lee in the late 1970s. Even though Ferrara’s was just a two-block walk, the prices were much better for guys on tight budgets, working their way through UNO. After I graduated in 1980, I taught at Redeemer High School on Crescent Street, near St. Frances Xavier Cabrini church. Even though Pap’s was closer to the half-double we rented at the time, I found myself heading back down to Gentilly Boulevard for various items.

In 1986, we moved out to #themetrys, near Clearview and Veterans. While my daddy had soured on Dorignac’s over the years and shopped at Schwegmann’s, Zuppardo’s Family Supermarket  at Transcontinental was so close, it became our grocery. My boys grew up coming with me to Zuppardo’s all the time. As they got older, cashiers would ask after them. I’d show photos of them as Brother Martin students and they’d sigh at how time passed. That little boy who pushed a Little Tykes shopping cart, loading it up with things important to him (cookies and fruit roll-ups) is now a Naval officer and submariner.

I’m not sure when they dropped the “Economical” from the name, becoming “Zuppardo’s Family Supermarket.” The original store closed in 2005, as Katrina left the store and all of Gentilly in pretty bad shape. To this day, my wife still says “Economical,” which I attribute to her growing up in Lake Oaks and transferring from the Broad bus line to Elysian Fields, on her way home from Dominican.

Two Saturdays ago, Zuppardo’s Family Supermarket closed. They knocked a hole into the side of the old store and moved everything into the new one. I’ve been an almost-daily grocery shopper for years. When your store is as close (about a mile) as Zuppardo’s is to us, it’s easy to blow off extended menu planning. Most of my “test kitchen” ideas start at Zuppardo’s Supermarket. The new store opened last Wednesday. Those four days drove me crazy, as I ended up at three different supermarkets to get things we usually pick up at Zuppardo’s!