Closing Time during the Southern Rebellion 1864 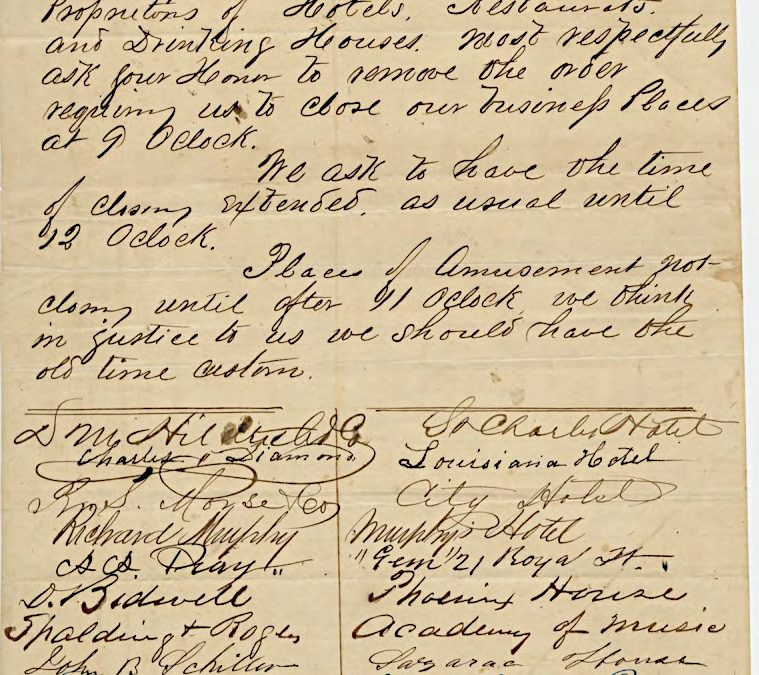 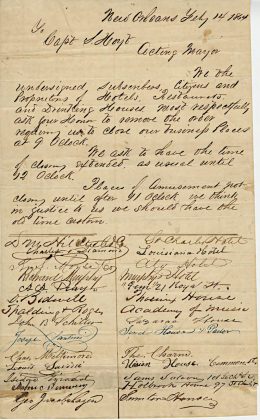 Petition to extend the opening hours of businesses in New Orleans during the Union occupation. (Tulane University Library)

Last week, during the CFP National Championship game, some guy on Da Twittah complained that the game was too long. He said folks at the game wouldn’t get out until after closing time in New Orleans.

The Twitterati of New Orleans, bless their hearts, dragged the guy mercilessily. After all, “closing time” is pretty much a foreign concept here. The tweeter lacked understanding of how things work in New Orleans.

We-never-close was not always business as usual in New Orleans. Establishments closed at midnight, prior to the Southern Rebellion. The Union Army restricted many public places, ordering them to close at 9pm.

Nine o’clock in New Orleans! The horror! The rebellion came to an abrupt halt, when the Union Army occupied the city in May, 1862. New Orleans chafed under occupation in many ways. Still, life in the city improved significantly when the port re-opened. Two years into the occupation, restauranteurs and hoteliers desired a later closing time. They wrote to the Acting Mayor, Army Captain Stephen Holt, with their request.

We, the undersigned Subscribers, Citizens and Proprietors of Hotels, Restaurants, and drinking houses, most respectfully ask your honor to remove the order requiring us to close our business places at 9 o’clock.

We ask to have the time of closing extended, as usual until 12 o’clock.

Places of Amusement not closing until after 11 o’clock, we think in justice to us we should have the old time custom.

The list contains an interesting cross-section of New Orleans businesses. It’s not just drinking houses. The number of hotels indicates that the port brought in visitors to the city, in spite of the conflict.

It’s unclear if the acting mayor agreed to the extension.

If you’d like to learn/share more about New Orleans in the 1860s, check out our Facebook page on the subject.