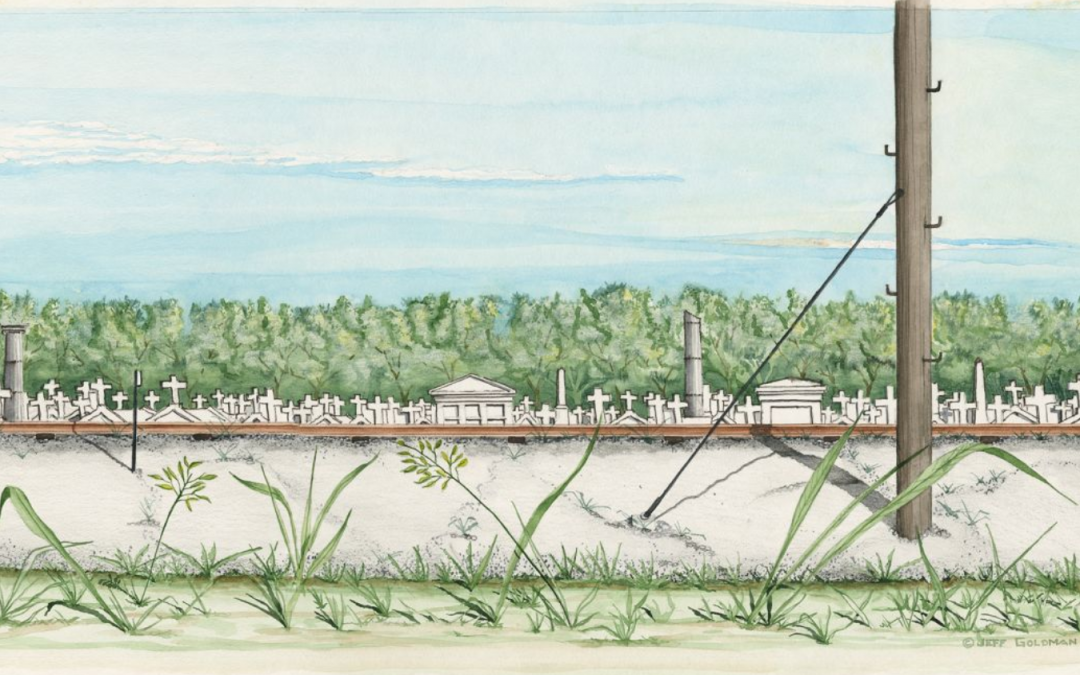 Cemetery scene with railroad tracks along I-10. (cross-posted to Pontchartrain Railroad – N Scale)

Local architect and artist Jeffrey H. Goldman painted this “Cemetery Scene” in 1985. It depicts a cemetery from the other side of a single railroad track. This painting and several others by Mr. Goldman are now held by the Historic New Orleans Collection.

I try to post three or four images of old New Orleans daily to social media. It’s a great way to promote my books. The process of choosing those photos is rarely simple. While it’s easy to find images and tie them to themes in my books, I end up going down rabbit holes. For example, I may find a great image of the Lakefront, then see another with details that merit further research. Then I look at other images related to that one, and down and down I go. It’s fun, even though it can be time consuming.

Finding this Goldman painting is typical. I sought Boyd Cruise paintings, since he did so many of buildings in the French Quarter. I expanded the search to include other artists, and Goldman came up.

This “Cemetery Scene” is of Greenwood Cemetery, viewed from the other side of the New Orleans Terminal Company track running parallel to the cemetery. Greenwood opened in 1852. Its western side was on the east bank of the New Basin Canal. The trains ran between the cemetery and canal.

This particular track connected old Union Station with the “back belt” tracks that run from Metairie, out to New Orleans East. Now, it’s only used by passenger trains coming and going from Union Passenger Terminal. While several trains used the track prior to the Amtrak consolidation, now it’s only used by the Amtrak Crescent. The video above shows the Amtrak Crescent traveling the track shown in Goldman’s Cemetery Scene. It’s shot from the other side of I-10, for safety reasons.

This video is from a couple of days prior to the cemetery scene. It shows the Crescent after it’s switched onto the Back Belt and is heading out of town.