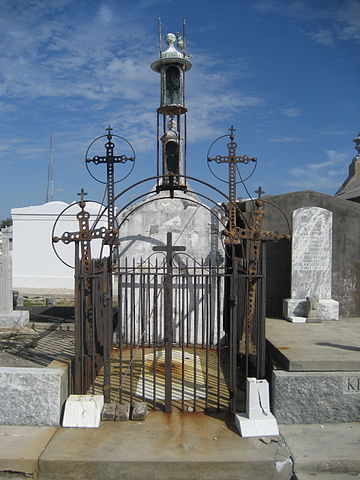 The above-ground cemeteries of New Orleans are one of our most interesting historic attractions. Visitors often tour St. Louis Cemetery Number 1 while touring the French Quarter. Many folks also walk through Lafayette Number 1, on Garden District tours. For folks into genealogy add a trip to “the cemeteries” at the end of Canal Street. There you see the stories of families told out over generations on tombstones.

Greenwood Cemetery and the “Canal Cemeteries”

From the Canal Streetcar heading outbound, get off at Canal and St. Anthony, instead of turning the corner to the terminal. Stand and look towards the lake. To the left is Cypress Grove, to the right, Odd Fellows’ Rest, and across City Park Avenue is Greenwood Cemetery.

Greenwood and Cypress Grove are two of the oldest cemeteries in the city. The Firemen’s Charitable and Benevolent Association (FCBA) built both. Many benevolent societies in New Orleans pooled the financial resources of their members. They built “society vaults” in the city’s established cemeteries. So, the FCBA built two full cemeteries. The FCBA was founded in 1834.

At the time, firefighting was a job for volunteers. It was just as dangerous a gig then as it is now. So, firefighters tragically lost their lives all too early. Immortal young people don’t often pause to consider buying into a benevolent society. So, these firefighters’ families often didn’t have the means to bury their loved ones. FCBA helped. While they could sell plots for graves and tombs to those with means, they generated the revenue needed to bury the heroes. 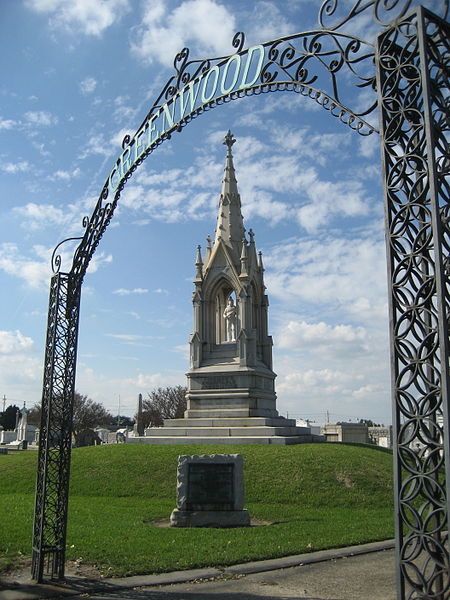 When you see Greenwood Cemetery from the streetcar, the most-visible fixture is the Firemen’s Monument. The FCBA commissioned the monument in 1884. It marked their 50th anniversary. Alexander Doyle sculpted the six-foot statue of a volunteer fireman. It’s the centerpiece of the monument. 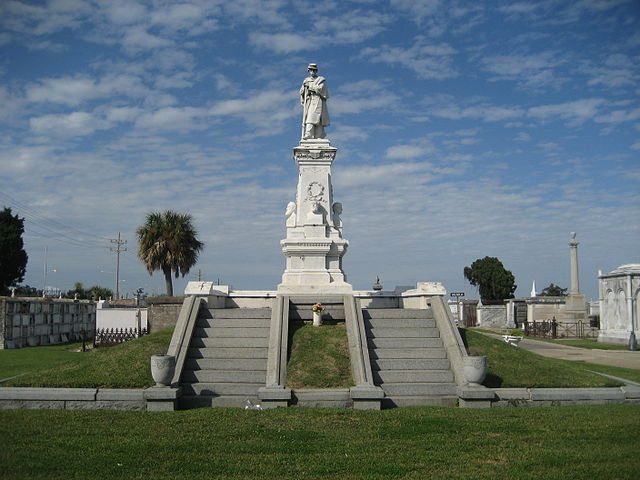 To the right of the Firemen’s Monument is a large, green mound topped by a bronze statue of an elk. This is the tumulus of the Benevolent and Protective Order of Elks, Lodge 30. The Lodge built it in 1912. A “tumulus” is a mausoleum where the burial vaults are covered by an earthen mound.

The other large memorial at the front of Greenwood Cemetery is the Confederate Monument. It was the first Confederate memorial to be dedicated in the city. The U.S. Government had already constructed the Chalmette Cemetery, behind the 1815 battlefield. So, it was the first Civil War memorial in the area. In 1874, the Ladies Benevolent Association of Louisiana took up the cause of creating a burial place for Confederate troops. Many were originally buried in Chalmette Cemetery. They wanted their loved ones removed from the Union cemetery.

The ladies re-interred the remains of those soldiers and others, about 600 altogether. The tumulus is a low mound, topped with a statue of a Confederate infantryman. He stands, resting on his rifle, atop an ornate marble pedestal. That pedestal includes four busts of Confederate generals: Robert E. Lee, Stonewall Jackson, Albert Sidney Johnston and Leonidas Polk. (An equestrian statue of Johnston stands atop a tumulus in Metairie Cemetery, and is visible from I-10 as one drives into the city from the West.) 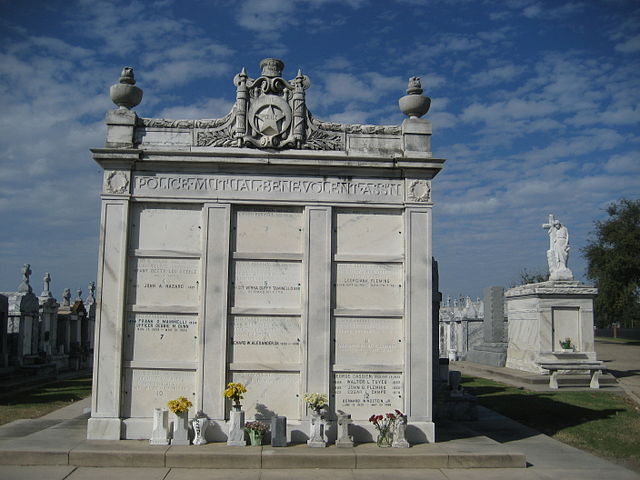 After the first row of monuments, Greenwood still has a number of interesting tombs, graves, and vaults. One of those is Police Mutual Benevolent Association. This was a burial society formed by  members of the New Orleans Police Department. Close by that tomb is one for employees of the D. H. Holmes department store. 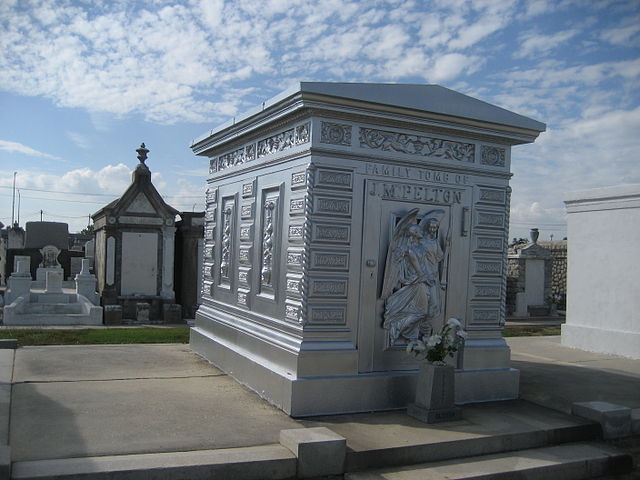 Another of the more interesting tombs is that of the Pelton family. Most tombs in New Orleans are constructed of brick-and-mortar. So, they get covered with plaster, and then whitewashed. It seems like they’re fancy, when it’s all just red brick. Families with more financial means often covered their tombs with stone. Granite or marble are common choices. The Pelton family constructed a metal tomb. They painted it silver, to prevent rust.

So, this tomb uses two plots. Greenwood’s plot size is small compared to many cemeteries. This made it more affordable for families to buy into the cemetery. It lacks the grand monuments in other cemeteries. The typical New Orleans burial vault is called a “double,”. It contains two vaults. Usually these are one on top the other. The law requires a year and a day waiting period before re-using a vault. So, a “double” gives a family the option of burying a second loved one in that time period.

Greenwood Cemetery is one of the largest in New Orleans 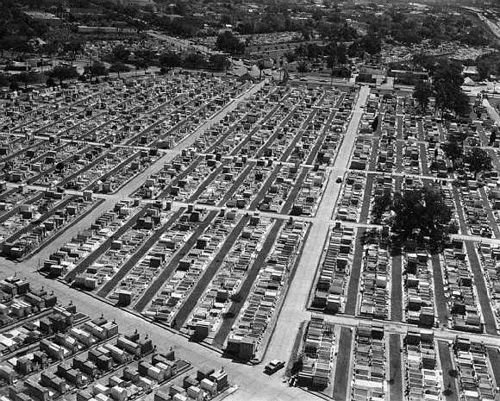 The sheer size of Greenwood Cemetery is hard to appreciate by just walking in the front. Therefore, this aerial view from 1967 shows the overall size. It extends far back from the City Park Avenue entrance. So, in addition to all these tombs, Greenwood has a large mausoleum in the back corner. As a result, Greenwood has space for generations to come.