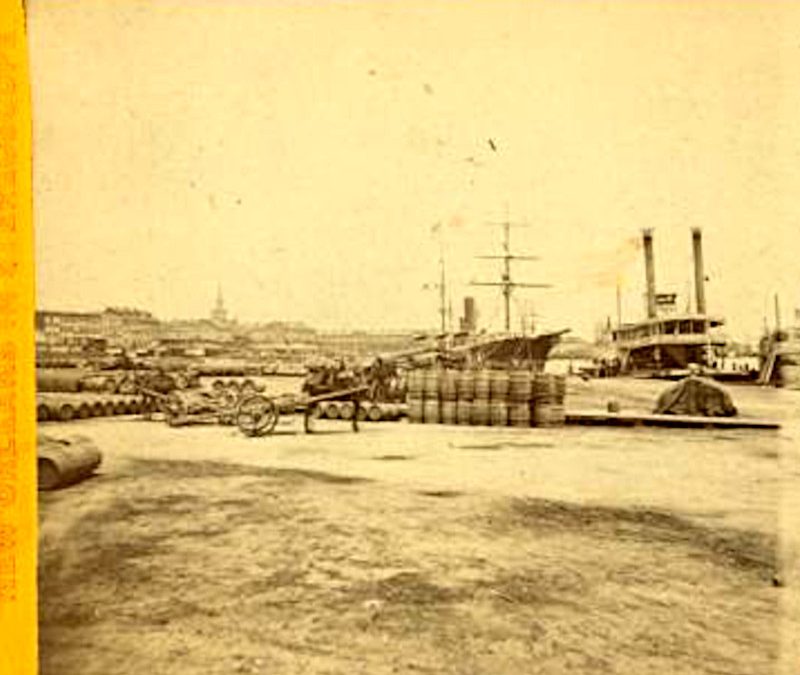 S. T. Blessing stereograph, titled, “View from Opelousas railroad ferry,” The image is essentially undated. The New York Public Library lists it as 1850-1930. The likely date is 1870s. The photographer stands at the Faubourg Marigny ferry landing, located at Elysian Fields Avenue and the river. The New Orleans, Opelousas, and Great Western (NOO&GW) railroad operated the ferry, connecting the east bank with their station in Algiers.

The NOO&GW railroad originated on the West Bank, in Algiers. It incorporated in 1853, with the mission of connecting New Orleans to points west. So, prior to the Southern Rebellion, the railroad grew west, to what is now Morgan City, Louisiana. The Union took control of the “Texas Gauge” railroad, from 1862 to 1865. Expansion continued during reconstruction. Additionally, we’ve written a couple of articles on the railroad. It started from a Louisiana operation to ownership by Charles Morgan, to becoming part of the Southern Pacific system.

Blessing captures an active riverfront scene. The vessel to the center of the photograph is an ocean-going ship. While this vessel may depart for the US east coast, like New York or Baltimore, the riverboat on the right will likely return up the Mississippi. Two mules stand in the foreground, resting after unloading barrels. Those barrels likely contain molasses. Sugar plantations processed raw sugar cane. They converted it to molasses, making it easy to barrel and transport. Longshoremen loaded those barrels on both types of ships.

In the background, a church steeple rises from the neighborhood. Given the position of the photographer, that is likely the spire of Sts. Peter and Paul Catholic Church. 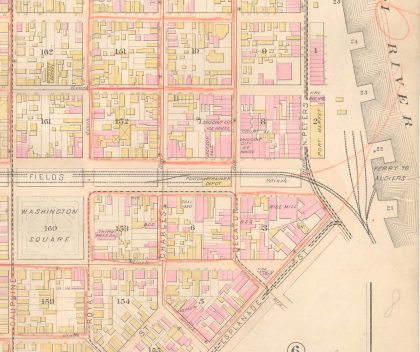 The NOO&GW ferry crossing enabled passengers to board trains on the east bank, cross the river, and continue westward. While Algiers was the railroad’s main station, getting passengers there was still a challenge. The railroad ferry gave passengers a more-comfortable ride, in their coach and sleeper cars.

After Charles Morgan sold the NOO&GW to the Southern Pacific system, trains crossed the river in Jefferson Parish. That ferry landing was near the location of the Huey P. Long bridge. Rather than traveling to the Faubourg Marigny railroad ferry, passengers boarded SP trains at Union Station. The departing trains headed north from there.

PATREON Note: So, today’s post is NOT behind the Patreon wall, in the hopes that some of the folks who see the links on social media will get a taste of what patrons get daily. While we present the first hundred or so words on each post to non-patrons, we felt it would be good to offer an entire post.