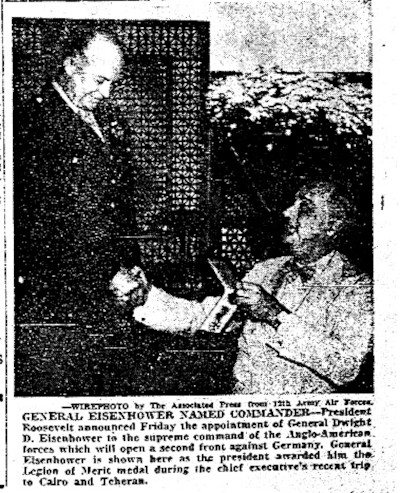 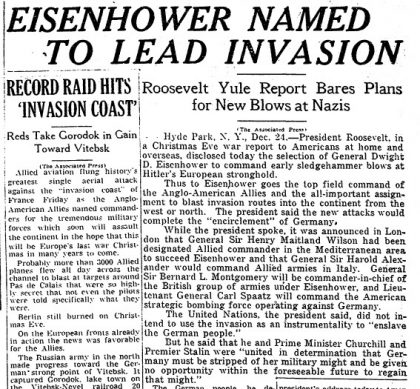 “Roosevelt Yule Report Bares Plans for New Blows at Nazis” was the subtitle for a page 1 story in the Times-Picayune, Saturday, December 25, 1943. President Roosevelt gave a report on the progress of the war, on Christmas Eve, via radio. In it, he named General Dwight D. Eisenhower as commander, “to blast invasion routes into the continent from the west or north.” Meanwhile, Churchill’s government in London announced the British generals who would join Eisenhower with invasion commands.

It’s difficult to look back now on what families in New Orleans were thinking on Christmas morning in 1943. While the Allies made advances in North Africa, Italy, and on the Eastern Front, there was no movement yet into Northern Europe. Hitler’s “Fortress Europa” was intact. Everything was high-level planning, involving FDR, Churchill, and Stalin.

As we now know from numerous monographs and movies, there was a lot of behind-the-scenes posturing among the Allied Generals. Churchill’s chose General Sir Henry Maitland Wilson to step into Eisenhower’s command in Italy. Montgomery appears in this announcement, but FDR mentions Americans other than Ike. We know now that Patton angered Ike over his command in Sicily. Thing was, the Germans sincerely believed Patton was the superior commander. The notion that Eisenhower would give command of the invasion to anyone besides Patton never entered into the German high command’s thinking. So, FDR omitting Patton fit the thinking. Why re-state the obvious? The British suffered the drama with Montgomery. The Germans followed Patton’s movements for the next six months, looking for clues. 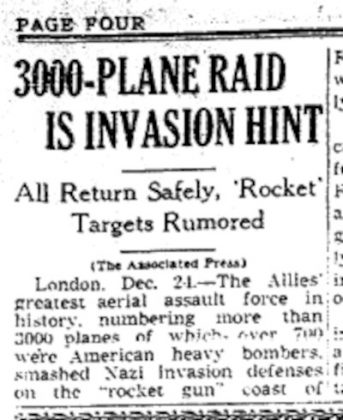 The page-one story just to the left of coverage of FDR’s address updates New Orleans on recent activity. The second graf offers insight into invasion planning. The Germans, including the northern commander, Generalfeldmarschall von Rundstedt, focused on Pas de Calais. Dover to Calais offered the shortest route across the channel.

Another AP story appeared on Page Four of the Christmas edition, reporting on a major Allied air raid. In the story, one pilot summed up the raid:

Lieutenant William S. Breiner of Akron, Ohio, said, “Airplanes were everywhere. I bet they thought the invasion had started.”

The story mentions an Army Air Corps communique stating there was minimal fighter opposition. That would change when Rommel assumed command of the Atlantic Wall in January, 1944. Additionally, the AP reported rumors of German “Rocket Guns,” and the need to destroy possible launch sites. This, of course, became reality, as the Germans launched their V-1 “buzz bombs” and V-2 rockets in 1944.

New Orleans fully supported the war effort. Manufacturing facilities, Andrew Jackson Higgins’ landing craft, major military hospitals, and shipbuilding kept the city busy. Retailers like the Krauss Corporation did everything they could to promote the sale of war bonds. Good news about air attacks and planning for the Summer of 1944 enabled New Orleans to have a cautious but happy holiday season.