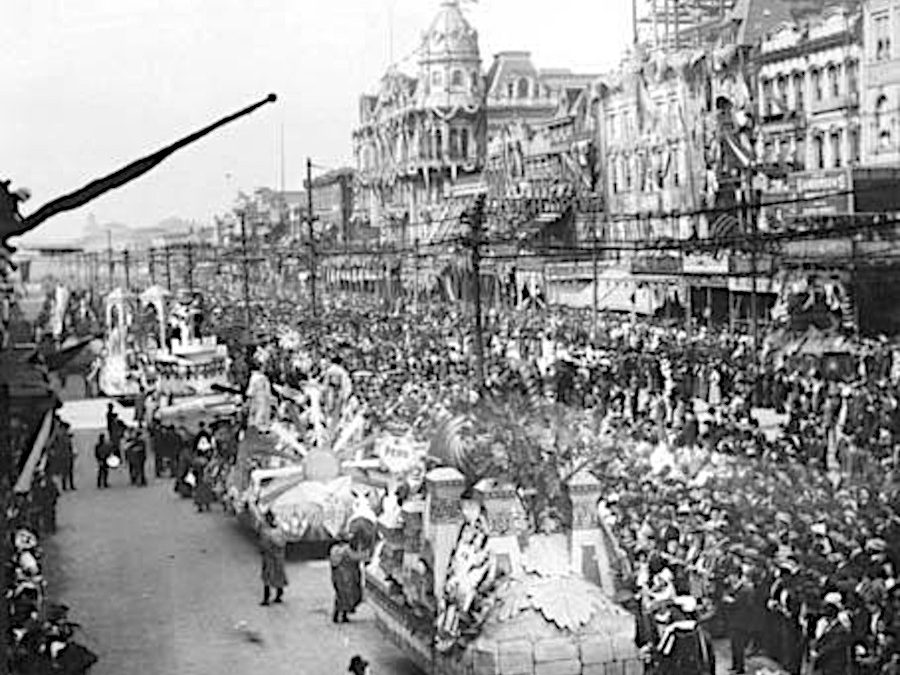 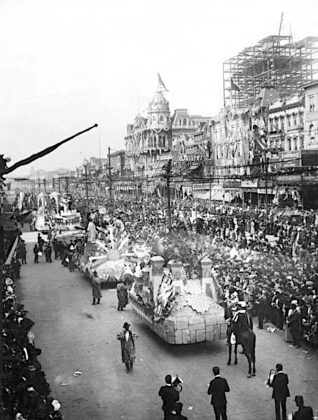 George Francois Mugnier also caught the Rex Parade in 1907. His photo shows the parade moving lakebound, in the 800 block of Canal Street. A “riding Lieutenant” stands behind a float. A classic jazz band is behind the rider. The stores of the 801 block appear background right. the Mercier Building, with its golden cupola, rises, background center. The crowd stands on either side of Canal Street, as the parade goes up the Uptown side, turns around, then goes down the French Quarter side. Mules, draped with white canvas, pull the floats. The flagpole, flag furled around it, is likely the Lazard’s store.

In our #AllisonUnpack earlier today, Alexander Allison caught the steel frame of the “new” MB building in distance of his 1907 photograph. Allison stood in the 500 block of Canal to catch this parade. Mugnier’s perspective, standing in the 700 block, offers more detail of the progress of the new store. The Mercier Building went up at 901 Canal in 1884. The Merciers acquired the corner from Christ Episcopal Church. The church chapter auctioned off their gothic-spire church that year. The sale netted the chapter enough to build the current Christ Episcopal Cathedral. That church towers over St. Charles Avenue and Sixth Street. That corner is also a busy area on parade days.

So, Shwartz opened the Maison Blanche in the Mercier building in 1897. Ten years later, he felt growing pains. He planned a building with five stories of retail space. On top of that he built two office towers. The towers brought the total height of the building to twelve stories. A thirteenth story was added to the rear tower later. This became the studios of WSMB Radio.

To keep MB operating during the construction, Shwartz moved everything from the store into the front half of the Mercier Building. The rear was then demolished. The rear tower rose in the empty space. When that tower was complete, MB moved into the new space. They tore down the front of the old building (alas, losing that magnificent cupola). In its place rose the front of the current building.

Mugnier may never have caught this transitional period for Maison Blanche, were it not for the Rex Parade. Allison’s and Mugnier’s photos are courtesy New Orleans Public Library.