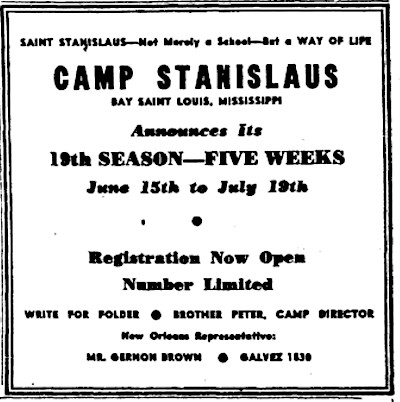 SAINT STANISLAUS — Not merely a school — BUT A WAY OF LIFE

We’ve featured Camp Stanislaus before, since it’s an integral part of the BOSH experience in New Orleans. St. Stanislaus is where it began:

Brother Martin Hernandez, SC, was fond of saying of the Institute, “We are not here to teach boys how to make a living but how to make a life.” This ad starts with a variant of that statement. In a modern context, this philosophy offers a stark comparison to another local Catholic high school. While the BOSH cherish the notion of academic excellence, the Institute and its schools recognize education is more than “book learning.” It’s an excellent response to recruiting blitzes featuring statistics like National Merit Scholarship Semi-finalist lists. Rather than saying, oh, well, all they do is teach the test, BOSH schools emphasize what really matters.

There were a lot more Brothers in 1928, but Camp Stanislaus is still strong. Check the program out on their website and on Facebook.