Dave McNamara, of WVUE FOX8 New Orleans, did a segment for his “Heart of Louisiana” series on the exhibition. Dave wanted someone to speak to the original, real Desire line. THNOC got ahold of me, and I got on the teevee.

Dave Walker at THNOC was familiar with my podcast segment on the Desire line. He connected McNamara and I. We got together at the Seignouret-Brulatour Building. Some folks may remember this building as the location of WDSU-TV for decades. Many of the station’s ID photos featured the courtyard at the Brulatour house. The building currently contains “Streetcar” exhibition. We walked across the street to the courtyard of THNOC’s Royal Street Campus. That’s where Dave interviewed me.

Tennessee Williams wrote “Streetcar” while living in an upstairs apartment on Royal Street. Since the Desire line serviced the French Quarter, he hard the streetcars coming and going. No doubt that influenced his creative process. Desire ran through the Quarter, Marigny, and into the Upper 9th Ward. Desire Street was the termination point of the line. 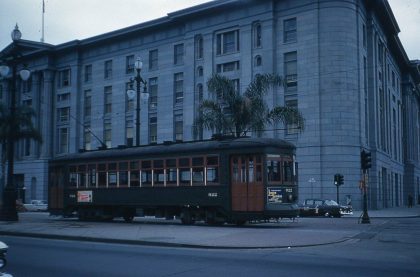 When the production company came to town to film “Streetcar,” they headed Uptown to Carrollton Station. The streetcar barn offers a practical route for filming. The streetcar emerges from the front of the barn. It turns left onto Willow Street, then left onto S. Carrollton, outbound. The car takes one more left, turning onto Jeanette Street. On Jeanette, it enters the barn from the rear. With the right lighting and camera angles, directors capture solid footage. The viewer remains unaware of the simple loop run. NOPSI 922, one of the 1923-vintage arch roofs received the call-up for “Streetcar.”

Additionally, this route appears in other movies. In “Runaway Jury,” John Cusack hops off of an arch roof on Jeanette Street, as if he’s heading home from work.

The “Other Desire Streetcar”

In the FOX8 segment, you’ll hear us talking about the “Streetcar Named Desire” the French Market Corporation displayed in the 70s and 80s. While NOPSI 453 was an older, Brill streetcar, it represented the city and movie for decades. That streetcar sat out of service for years prior to the movie, but every arch roof had “Desire” on its rollboard. So, in many ways, they’re all “Streetcars Named Desire.”

Thanks again to Dave McNamara for not leaving me on the cutting room floor (which now is the “delete” key on the computer), and to Dave Walker for thinking of me for this segment. “Backstage at ‘A Streetcar Named Desire” runs at THNOC until July 3, 2022.