Canal Street 1890, was a transitional period for the city’s main street. 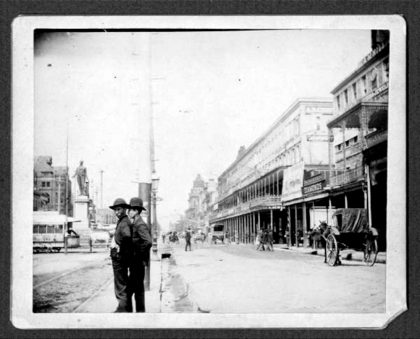 Lots in transition in this Canal Street, 1890 photograph. The photographer is William S. Howell. He shot it on March 25, 1890, at 3:45 PM. There’s lots to break down here, but let’s focus on Maison Blanche and its history. Howell stands at Canal Street and Exchange Alley, He’s looking up Canal: the upper half of the 600 block, then the Touro Buildings in the 700. The 800 block is bunched together, with the cupola of the Mercier Building in the 900 block visible in the background. In the neutral ground  mule-drawn streetcar circles the Clay Monument counterclockwise. Two men stand in the foreground, possibly waiting for a streetcar.

A. Shwartz and Son

Abraham Shwartz’s dry goods store reached its peak by 1890. Shwartz moved into the corner of the Touro Buildings at Canal and Royal Streets. He ran the store with his firstborn. Youngest son Simon served as the company’s buyer and New York representative. While he lived in NYC, he regularly traveled between the two cities. Simon learned a great deal about the retail business living in New York. He picked up on modern trends. While his father listened, A. Shwartz and Son was slow to change. Simon wasn’t ready to break from the family in 1890.

The Howell photograph presents an interesting perspective on the 701 block. As you can see, the entire block still stands four stories high. The original design of the townhouse-style buildings remains intact from the 1840s. The far corner of the block, Canal at Bourbon, was the second site of Christ Episcopal Church. Touro bought out the church, and the chapter moved to the 901 Canal, at Dauphine. That church no longer stands in this photograph. The building with the high cupola in the background replaced the third Christ Church, in 1885. So, by this photograph, Abraham Shwartz, Bernard Fellman, and B. Cohn operated from the Touro Buildings. Leon Fellman split with his brother in 1888. He opened Leon Fellman and Company in the 901 block in 1888.

Transit in transition! Well, not quite yet. The photo shows a “bobtail” streetcar, in front of Henry Clay’s statue. The base of the monument filled the three-way intersection (St. Charles Street on the left, Royal and the right, and Canal running river to lake). It formed a roundabout for the streetcars. That would change in five years, as electric streetcars took over. 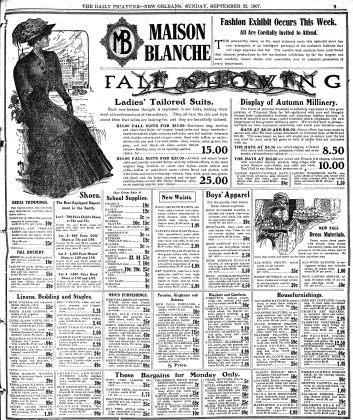 Ad for Maison Blanche in The Daily Picayune, 22-September-1907

Simon Shwartz’s department store doesn’t come to Canal Street for another seven years, but the Mercier Building stands ready for it. Here’s an ad for MB in The Daily Picayune from September, 22, 1907. This was the last Fall/Christmas for the store in the Mercier Building.

If you like the story of Maison Blanche, you’ll want to get my book, Maison Blanche Department Stores, available at all the usual suspects.