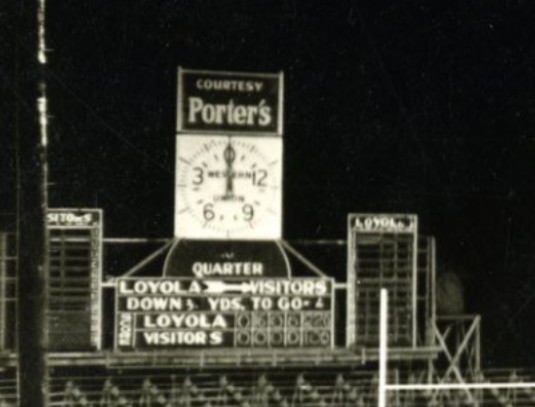 Located on campus, Loyola Stadium was home to the university’s football team in the 1930s. 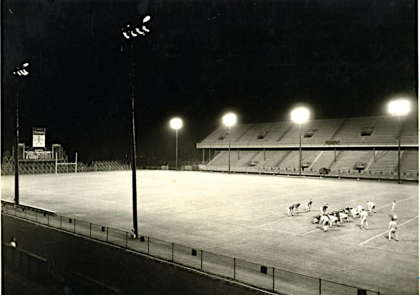 Night shot of Loyola Stadium at Loyola University, New Orleans, 1938. While the venue takes the name of the school, several photographs identify it as “Joseph Fromherz Stadium.” The venue opened in 1928. This photo–which is stamped on the back with, “Photography by // F. A. // McDaniels // NEW ORLEANS, LA.”–shows what is likely a night practice for the Loyola squad. There’s no crowd or support staff visible. Loyola Stadium was one of the first in the South to host night games. 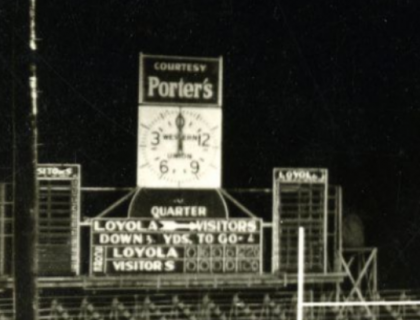 The end zone clock says, “Courtesy Porter’s.” Porter’s was a menswear store in the CBD. The stadium was demolished at some point after the 1939 football season. 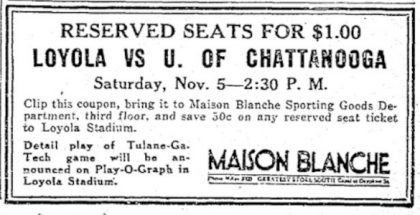 This article’s inspiration was a coupon printed in the Times-Picayune on 1-November-1932. Maison Blanche sponsored a deal for $1 reserved seat tickets to the Loyola-Chattanooga football game the following Saturday. I post ads from local newspapers to social media during the week, and shared this one. The ads spark conversation and help promote my books. A few people commented that they didn’t know Loyola had a football stadium. So, off to the Loyola archives I went. 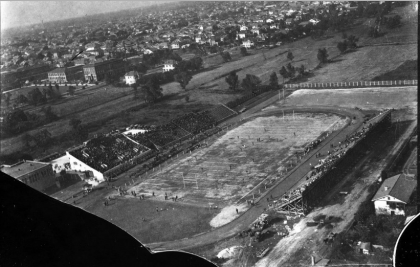 Here’s an aerial photo of the stadium by Franck Studios from 1924. Loyola Stadium stood at the back of the campus, on Freret Street, just off Calhoun. It’s unclear who Loyola is playing here, but the image offers a good view of Freret Street in the 1920s.

This action photo shows a billboard listing the Loyola football schedule. While it’s dated by the library as 1938, the stadium appears to only be a single-deck. That doesn’t fit with other photos. I’m wondering if this is from a different location.

Loyola discontinued its football program in 1939. The stadium was demolished some time after that. In its place rose the Loyola Field House. The university decided in 1954 that their intercollegiate basketball team needed a better home. So, up went the Field House. While nothing indicates that buildings were demolished to make way for the Field House in 1954, there’s no clear record of what stood on the site between the stadium and the arena.