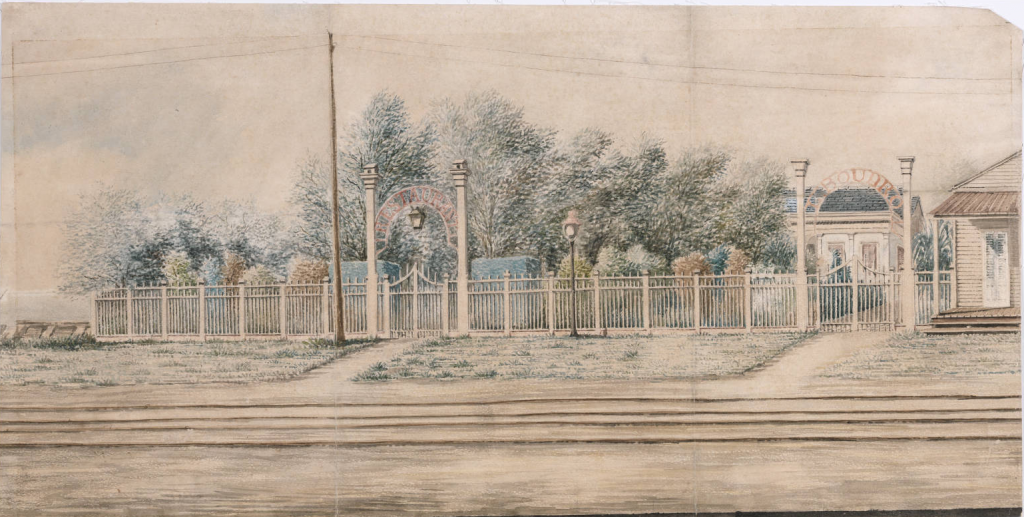 Lucien Boudro opened a seafood restaurant in Milneburg, in 1842. He passed away in 1867, and the restaurant closed a few years later. The restaurant was in a charming house with a gated garden. The train tracks in front of the restaurant were for the Orleans and Pontchartrain RR, known as the “Smokey Mary”. Milneburg was an active port area in Antebellum New Orleans. Ships could bypass the river passes by coming from the Gulf of Mexico to Lake Borgne, through the Chef Menteur Pass or the Rigolets, then into Lake Pontchartrain, docking at Milneburg. They’d get back to Faubourg Marigny by taking the train down Elysian Fields Avenue.

I haven’t found any restaurant reviews for Boudro’s, but surely they had access to a lot of good lake seafood.

Image is a watercolor on linen. Artist is unknown. 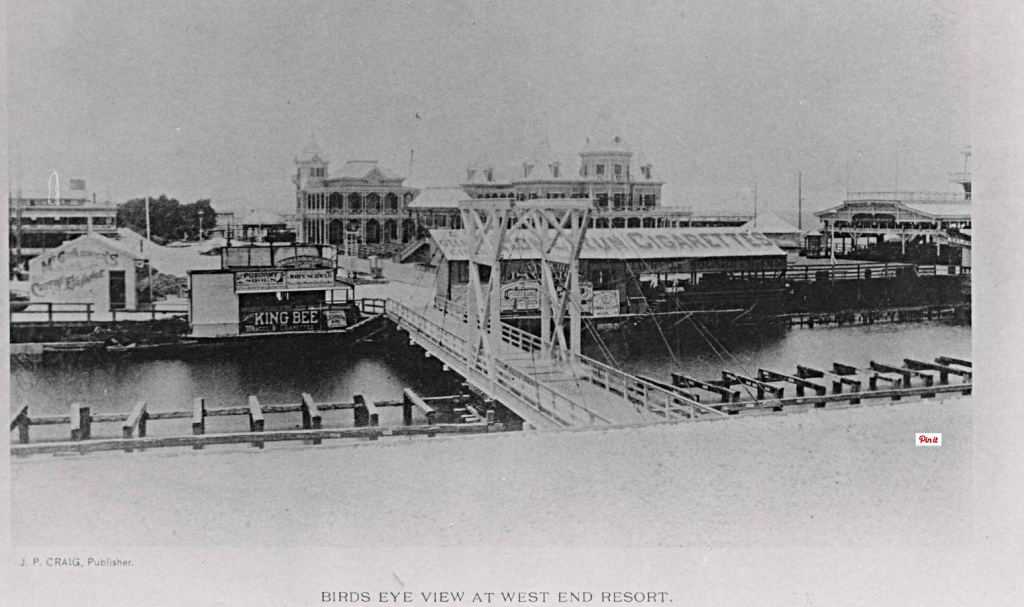 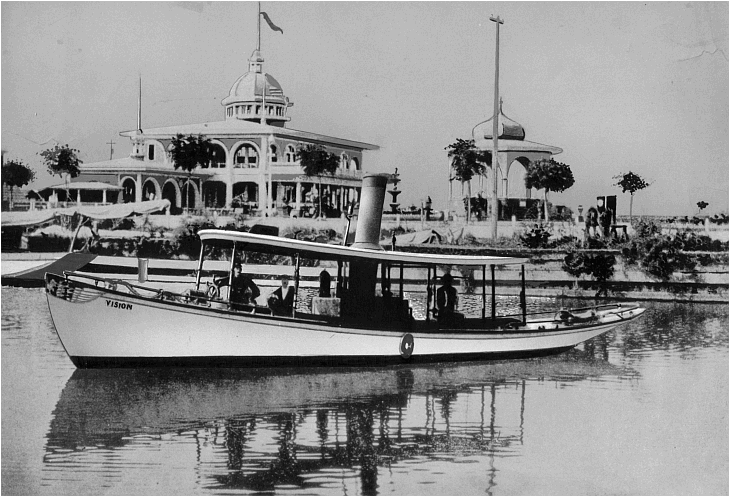 “Ain’t There No More” Restaurants 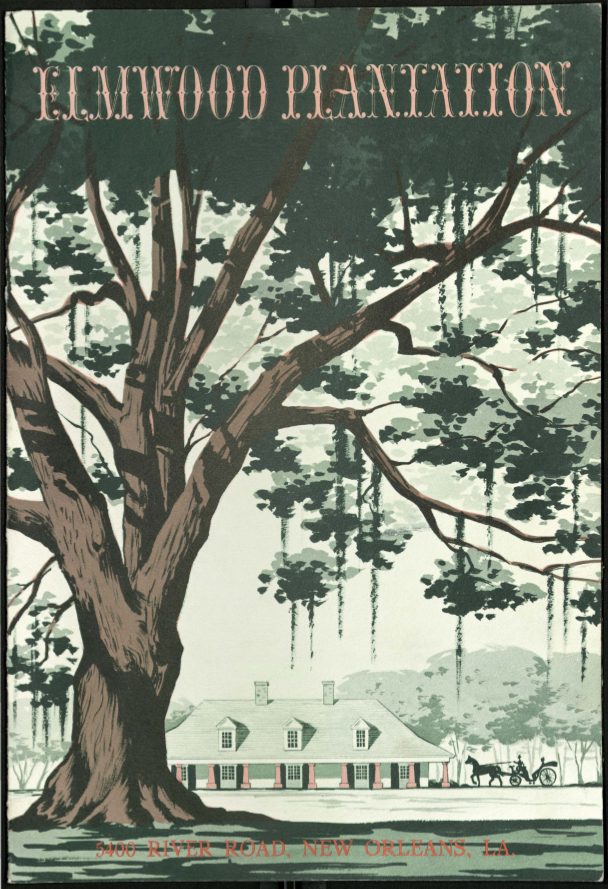 Elmwood Planataion dated back to 1762. It was built by Nicholas Chauvin, for the first American governor of Louisiana, W.C.C. Claiborne. The two-story mansion was a fixture on the river, just above New Orleans. The house caught fire in 1940, causing heavy damage. The house was re-built as a single-story building. In 1962, a group of investors acquired the house, refurbished it, and opened it as a restaurant. Elmwood Plantation was popular out-of-the-way dining destination from the 1960s to the 1980s, when a second fire destroyed the restaurant.

The image is a copy of the menu, from the State Library of Louisiana’s menu collection. It dates from the late 1970s. View the entire menu (PDF) here. 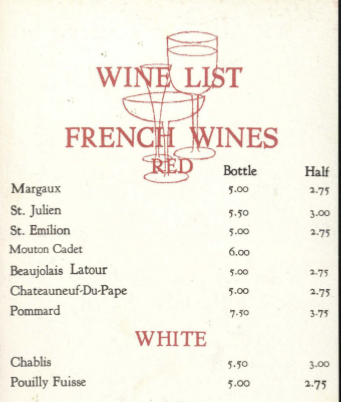 Wines are offered by location in France. For the Bordeauxs, there’s no breakdown by winery or vintage.

There’s a good section on the history of Elmwood Plantation in the book, Lost Plantations of the South, by Marc R. Matrana.

Disregard the oral history tradition at your peril…(re: @TPrice504 article) 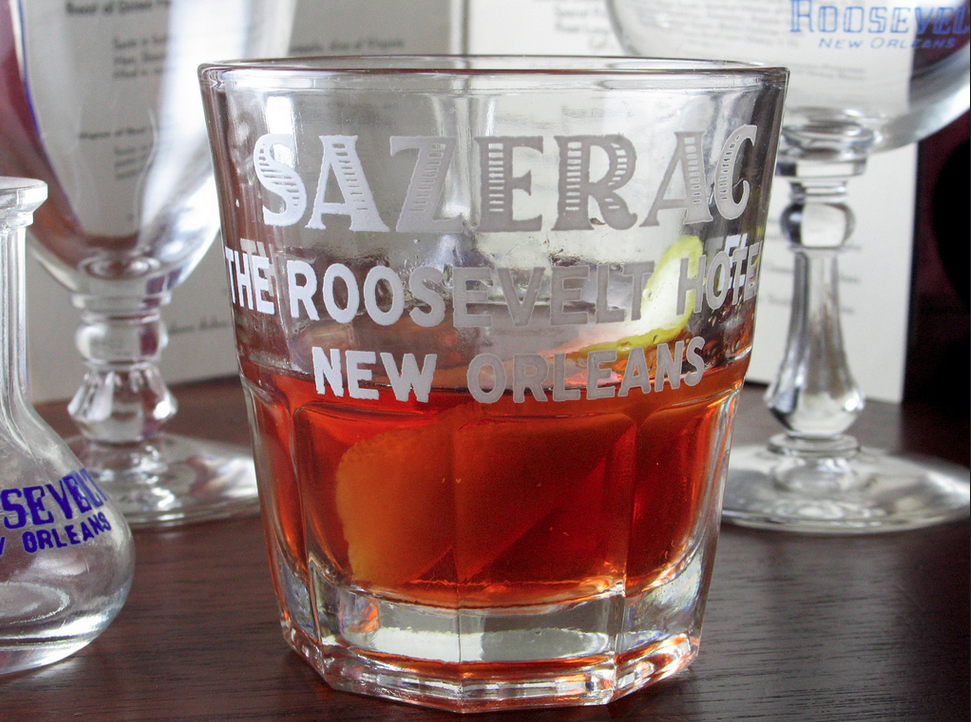 I’m a big believer in oral history. It’s a critical part of researching any subject. The biggest problem with oral history is that it’s difficult to assess it’s value when trying to establish a timeline. Memories fail, people deliberately change stories for various reasons. It can get complicated.

What concerns me, though, is when a writer outright disregards oral history, without an explanation of why they’re doing it. That’s the feeling I had when reading Todd Price of NOLA.com write-up of a Tales of the Cocktail seminar on the Sazerac cocktail given by David Wondrich of Esquire Magazine. The title of the article is Everything you know about the Sazerac is wrong, Esquire writer says. Well, I wrote a short article on cocktails for GoNOLA.com last summer, so I considered that, challenge accepted.

So, Todd’s introduction of Wondrich raised my eyebrows:

Wondrich has come to New Orleans before and tried to kill myths about the Sazerac. In the past, he has cited solid proof, despite what the tour guides will tell you, that the Sazerac was not the first cocktail. Hardly anyone in New Orleans seems to listen.

OK, sure, we all know New Orleans has a lot of “buggy ride history”, but we also have a lot of legitimate historians and tour guides. Someone swooping down and debunking us from out-of-town, well, now I’m starting to roll my eyes. But let’s look at what Wondrich has to say:

The standard story, which you will find on the website of the Sazerac liquor company, is that by the middle of 19th century, the Sazerac cocktail was a popular and recognized cocktail using Peychaud’s bitters. Originally made with a defunct brandy called Sazerac de Forge et Fils, in 1873 the recipe substituted rye and added a dash of absinthe. The cocktail, according to the oft repeated story, was created at the Sazerac Coffee House.

OK, here’s what I wrote a year ago:

Peychaud’s cocktail is widely regarded as the first cocktail invented in America, but he did not give the drink its well-known name, the Sazerac. The name comes from “Sazerac de Forge et Fils” brandy. In the 1840s, a local coffee house, the Merchants Exchange Coffee House, located in Exchange Alley in the French Quarter, picked up Peychaud’s bitters and his cocktail. The owner of the coffee house, Sewell Taylor, decided to use only Sazerac de Forge et Fils in the drink, so people began to ask for the “Sazerac Cocktail.” By 1850, Taylor saw more potential in importing the brandy than owning just one bar. He sold the coffee house to Thomas Handy, who moved the bar to Royal Street, changing its name to the Sazerac Coffee House.

This is based on the oral tradition from the liquor company. Wondrich says there were saloons named “Sazerac” in a number of other cities. Todd’s write-up doesn’t detail when this is, 1840s, 1850s, post-war, turn of the century. What we do know, however, is that a brandy-and-bitters cocktail in the 1840s. Did they call it a “Sazerac” then? Probably not. But consider this: A customer comes into the Merchants Exchange. He walks up to the bar and says,

“Give me that cocktail, the one with the Sazerac brandy in it.”

After a few years, it becomes the house special. People likely came in and asked for the speciality of the house. Didn’t need to call it a “Sazerac” when you were in the Sazerac. 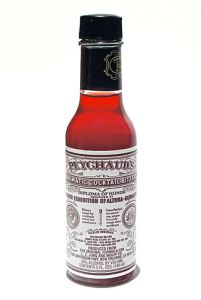 Then Sewell Taylor sells the bar to Thomas Handy. Handy moves it and changes the name, putting “Sazerac” front and center. Did the name spread from there? Sure, westward expansion makes sense. Bismarck, ND was founded in 1872 (so was the Rex Parade, by the way0. I can see someone from New Orleans making their way out west and bringing a bit of home with them. Twenty to thirty years (including a civil war) is enough time for the name to get around.

The cocktail continues to grow in popularity, at least in New Orleans. Men go into other “coffee houses” and tell the bartender, “Give me that drink they make over at the Sazerac.” At some point, the name of the bar and the cocktail merge. Probably around the same time somebody from New Orleans made it out to Eureka and Bismarck.

The meat of Wondrich’s debunking focuses on the “Improved Whiskey Cocktail”:

Curiously, the recipe for the bottled Sazerac included maraschino liqueur and no absinthe (see recipe below). That same drink was what the legendary bartender Jerry Thomas called an Improved Whiskey Cocktail in his 1876 cocktail book.

The Improved Whiskey Cocktail was all the rage at the end of the 19th century. By 1900, the fashionable drinkers had moved on to other intoxicating pleasures.

There’s a cocktail ante-bellum. Post-bellum, we have an “Improved” cocktail. What was the “improvement”? Most likely the switch of rye whiskey for brandy. Post-bellum, there would be major shortages of brandy in New Orleans, a combination of the Union Naval blockade in 1861, occupation by Union troops during the war, Reconstruction, and, maybe…just maybe…the Wine Blight:

The Great French Wine Blight was a severe blight of the mid-19th century that destroyed many of the vineyards in France and laid to waste the wine industry. It was caused by an aphid (the actual genus of the aphid is still debated, although it is largely considered to have been a species of Daktulosphaira vitifoliae, commonly known as grape phylloxera) that originated in North America and was carried across the Atlantic in the late 1850s. While France is considered to have been worst affected, the blight also did a great deal of damage to vineyards in other European countries.

“Give me that cocktail they used to make at the Sazerac.”
No brandy to make the popular cocktail? No problem, “improve” it. Use rye whiskey.
Marketing.
By 1888, the date Wondrich attributes to a written mention of the “Sazerac”, the “improved cocktail” was at least twelve years old. People keep asking for “that drink”.
By the 1900s, the liquor company decides to bottle the drink, Applications have to be filled out, paperwork processed. You don’t want a patent application to be denied for exaggeration, so go with a date easy to establish.
That doesn’t mean throw out the oral tradition.
Now I want a Sazerac.
With brandy.
Next Entries »