Several of the buildings in this illustration of 600 Tchoupitoulas are still standing.

George Sully painted this watercolor of the 600 block of Tchoupitoulas Street around 1843. The painting depitcts several three-story buildings on the downtown side of the block (near Lafayette Street). The middle of the block includes two-story buildings, likely warehouses or stables. The end of the block on the Girod Street side is a four-story warehouse building. 600 Tchoupitoulas is typical of much of what is now the Warehouse District. Goods arrived on ships along the riverfront. Crews transferred them from the wharves to warehouses and light industrial companies just behind.

Since Sully painted this in the mid 1840s, mules were the primary conveyance along the river.

Cotton was king by the 1840s. It was the major export. These buildings likely handled incoming cargo. The main cotton mills stood in surrounding blocks. Workers unloaded bales of picked cotton from riverboats. Mules brought the cotton to mills, where the bales were compressed tightly. Ocean-going ships docked just behind the buildings of 600 Tchoupitoulas, as well as further upriver. Once the ships were unloaded and industrial goods from the Northeast and Europe delivered to warehouses, the mules then loaded the milled cotton. This trade built New Orleans into the second-largest port in the United States. By the 1850s, the port was the largest in the soon-to-be rebel states.

The artist was born in Norfolk, Virginia, in 1816. George’s uncle (his father’s brother), Thomas Sully, painted the well-known equestrian portrait of George Washington, The Passage of the Delaware.

George’s father, Chester, was a cotton merchant. From Virginia, the family made their way to Florida, after its sale from Spain to the US. George then traveled to Louisiana, where he painted many scenes of New Orleans. He died in Covington, in 1890.

The Lafayette Street end of the block are storefront buildings with offices and apartments above. The two-story buildings, leading to the four-story warehouse are now the Cambria Hotel New Orleans. 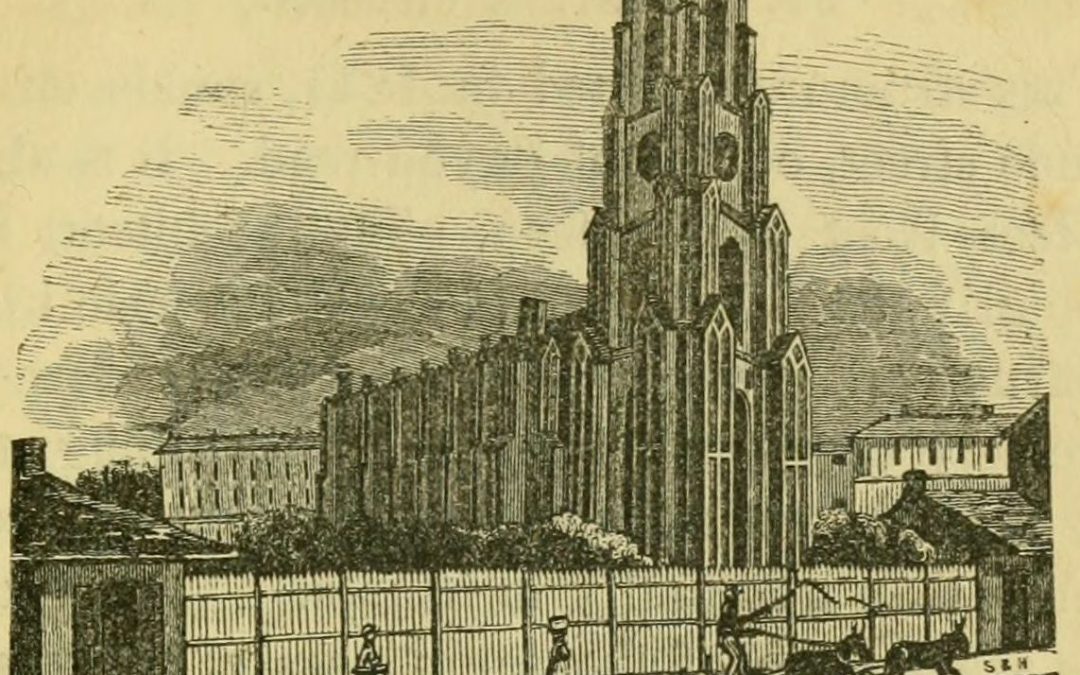 St. Patrick Church 1845 is an engraving of the first “Irish” parish church in New Orleans. 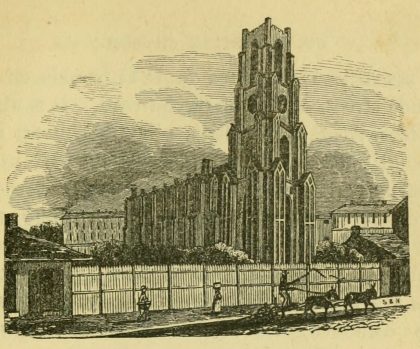 CONTAINING A BRIEF HISTORICAL SKETCH OF THE

TERRITORY AND STATE OF LOUISIANA,

FROM THE EARLIEST PERIOD TO THE PRESENT TIME:

A COMPLETE GUIDE
TO ALL SUBJECTS OF GENERAL INTEREST IN THE SOUTHERN METROPOLIS;

WITH A
CORRECT AND IMPROVED PLAN OF THE CITY, PICTORIAL ILLUSTRATIONS OF PUBLIC BUILDINGS, ETC.

Is situated in Camp street, near Lafayette square. The design is a triumph worthy of the genius of Gothic architecture, whether the dimensions, or the splendor of the structure be considered.

The measurement is 93 feet by 164 on the ground; and from the side walk to the summit of the tower, 190. The style is taken from the famous York Minster Cathedral, and executed agreeably to the designs of Messrs. Dakin & Dakin, which were adopted by the trustees of the church. It surpasses every attempt at a similar order on this side of the Atlantic, and when completed, may proudly challenge comparison with any modern parochial edifice in Europe. It cost about $100,000.

So, the Creoles focused on St. Louis Cathedral, hearing Mass in French, and the Anglo-Irish Catholics used St. Patrick Church 1845, with English services. (Note that most of the Mass was in Latin at both locations.) When the cathedral closed for renovations in 1849-1851, the bishop shifted his seat to St. Patrick’s as pro-cathedral.

The Irish community in New Orleans grew in the 1820s. This period pre-dates the Great Famine. Many British merchant ship captains operated from Liverpool to New Orleans. They brought raw materials, cotton, indigo, and tobacco, from America back to Britain. To get back to American ports, the captains loaded their ships with stones, granite, slate, etc. This ballast stabilized the ships for the crossing. As more Irish desired passage to America, the ship captains were all for ballast that walked on and off their ships without assistance.

The Irish settled near the riverfront, on the “American” side of Canal Street. The community continued to grew in the 1840s. By the 1850s, a second “Irish” parish developed further upriver. St. Alphonsus Liguori Parish focused the community in the “Irish Channel” neighborhood.