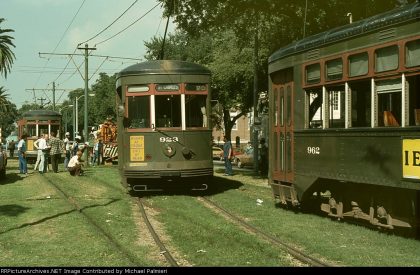 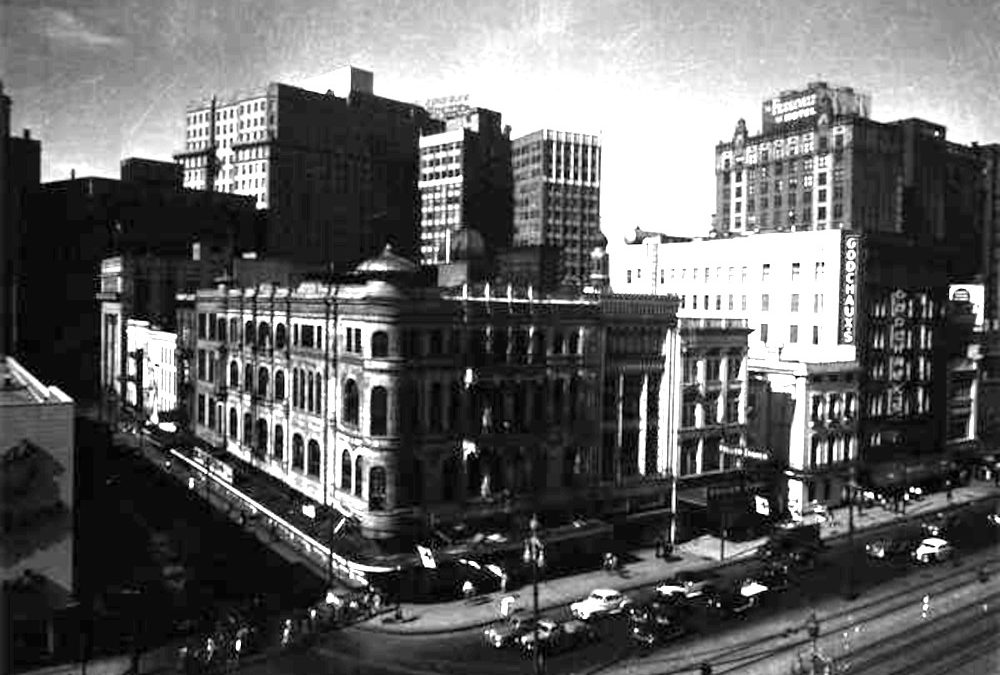 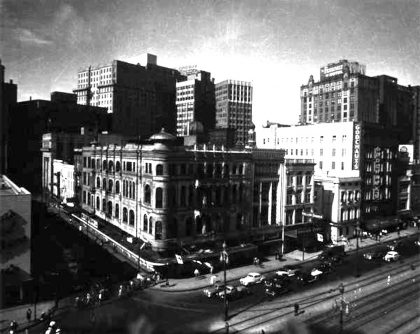 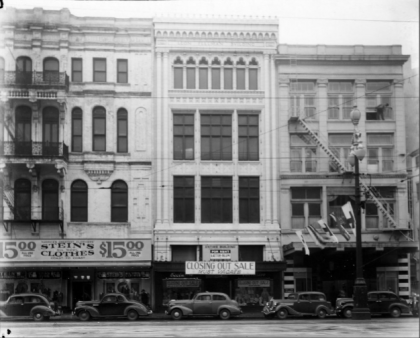 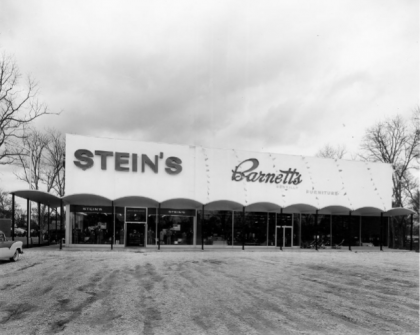 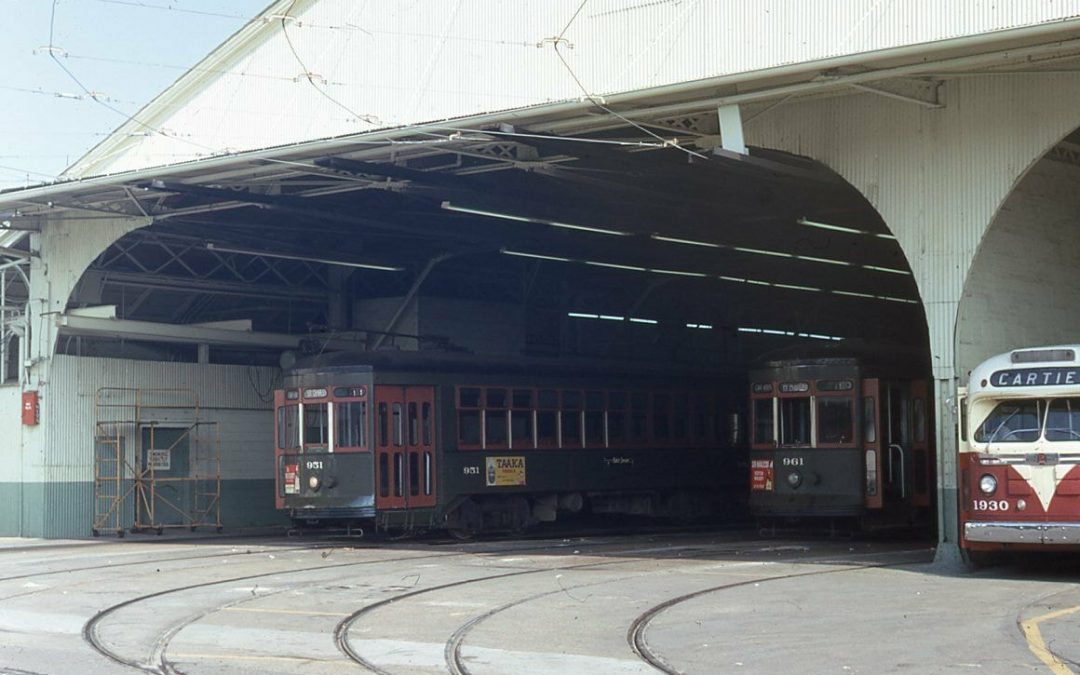 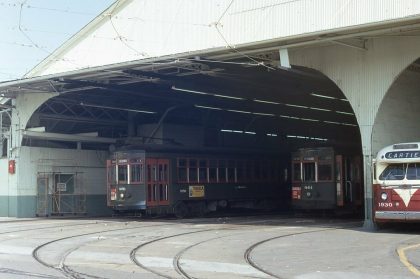 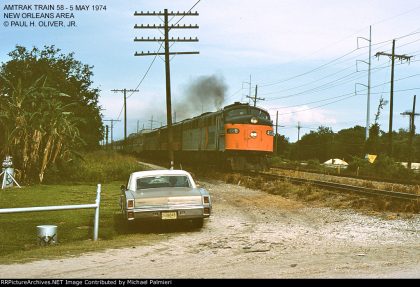 Paul Oliver photo of Amtrak’s Panama Limited, 5-May-1974. This is train #58, heading northbound from New Orleans to Chicago. Here’s Mike Palmieri’s caption, from a Facebook group:

Amtrak took over passenger rail operations three years prior to this photo, in 1971. The nationalization of passenger rail in the US meant a lot movement of equipment. The existing railroads turned over their passenger equipment to Amtrak. Therefore, the Panama Limited continued to operate Illinois Centeral (IC) equipment.

By 1974 Amtrak repainted much, but not all of their rolling stock. Three locomotives pull #58 here. An IC EMD E8A-B-A trio lead. The two A units sport Amtrak livery, but the B unit remains in IC colors. The two dome cars following the locos one wears Amtrak, the other appears to still be IC brown and orange.

This mash-up of  colors and equipment continued throughout the 1970s. While the early years presented combinations of Amtrak and single railroad colors, trains became more diverse as equipment moved around the country. Eventually, Amtrak replaced “heritage” equipment with newer, modern cars. The last of the original, pre-1971 cars to roll were diner cars. Amtrak replaced these cars with newer diners in the 2010s. 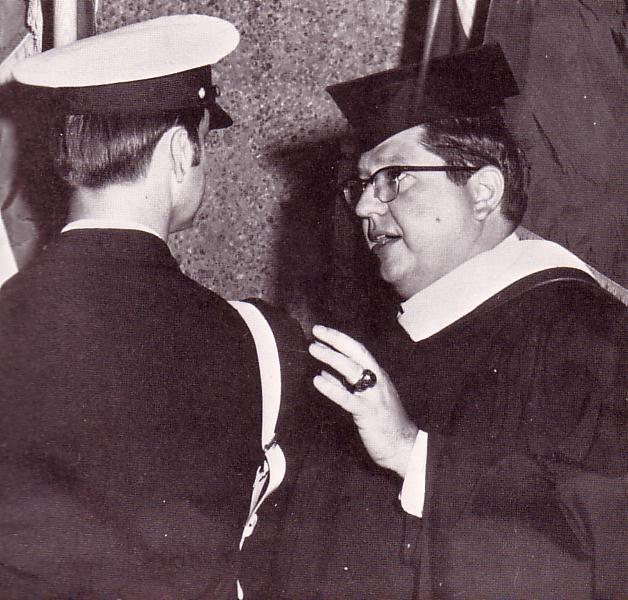 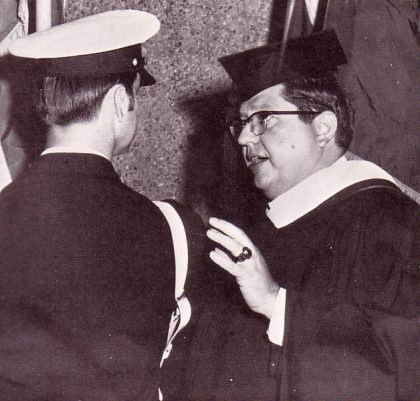 Brother Jean Sobert, SC, Director of Student Activities, gives last-minute instructions at Graduation 1970. The Charter Class of Brother Martin High School graduated in May, 1970. The commencement exercises took place at the Rivergate. Brother Jean speaks to a member of the NJROTC Color Guard, who participated in the ceremony. Brother Mark Thornton, SC, presided over the commencement as the school’s first principal.

The Class of 1970 set the tone for the opening and initial growth of the school. There was a lot of disappointment and sadness at the end of the 1968-69 school year. The students at Cor Jesu and St. Aloysius closed their schools. The classes of 1969 moved on. The rising seniors, along with the underclassmen, gathered on Elysian Fields in August of 1969 to open the new school. Brother Mark worked hard to bring the student bodies together, moving back and forth between Cor Jesu and St. Aloysius, talking to those rising seniors. He brought students into the planning over that interim summer.

One of the biggest things that unified Brother Martin in those first years was success in athletics. The basketball team, led by Coach Andy Russo, brought state championships home that first year, and in the 1970-71 season as well. Those teams combined the athletes from both schools. The 1969-70 team not only won state, but was ranked at the top of several national polls at the end of the season. The gym, now named for Coach Bob Conlin, offered a great (if not a tad warm) facility for basketball games. The facility held the entire student body and faculty for Mass and other assemblies.

Athletic success blended the disparate faculties and student bodies almost completely by the Fall of 1971. That’s when the football team won the 4-A state championship. The final game pit the Crusaders against neighborhood rival, St. Augustine High School, at Tad Gormley.

With the combination of Cor Jesu and St. Aloysius, class size exceeded 300 in grades 9-12. (Eighth Grade was about 100 students.) The school required a larger facility for commencement. While St. Frances Cabrini Church, on Paris Avenue, was a lovely place for Cor Jesu commencements, even that facility would be crowded. The Rivergate Convention Center opened in 1968. It provided a location large enough to accommodate faculty, student body, parents and guests.